In late September, I started a little digest series with this post about packing for a slow travel stint.  From there, we got settled, hiked, battled US border patrol, rolled with the punches, and packed to go.  So I should probably book-end things with our glorious return home.

So you’ve been on the road for a month or three.  What’s it like to go home?  (Or, in the case of Amanda and me, back to a lake house that functions as our primary legal residence)?

In this case, it was… tiring.

We left Vermont on a Wednesday at about noon, drove through two days of driving rain, and arrived in Michigan Thursday night after spending Wednesday night in Buffalo, New York.  I did all of that driving, so I was pretty wiped out.

But, when we come home from extended car travel, I don’t like to leave a car full of stuff for the next day.  Hauling cats around for a couple of days is dirty business, and I like to clean everything out of the Jeep and try to make it a normal car again.  So a 9 PM arrival time is usually followed, first and foremost, by unpacking the top loader, carrying everything in, and cleaning out the back.

For me, I also then tend to unpack almost immediately.  Everything out of its suitcase and back to where it belongs.  My desktop rig set up, the Amazon echoes plugged back in, and everything somewhere familiar, so that I can wake up the next day to normalcy.  I believe this is a habit I acquired in all of my years of management consulting, always wanting to create some semblance of normal in a hotel before I woke up the next day.

Settling Back in… Or Not

So that was Thursday night.  8 hours of driving, followed by several hours of unpacking.  You also do other things, like turn the water heater back on, wonder why the hot water smells strange, sweep to see if strange bugs or other things have infested your house in the last month, make sure everything works, etc.  And, strangely, if you’re anything like me, you completely forget where all the silverware goes.

And then you settle back in.  Or, at least you would, if you didn’t have to leave again 36 hours later.

As it turned out, our Michigan-time was short lived.  There was fun to have in Chicago, where we had some overdue family plans to attend to.  So not 36 hours removed from a month on the road, Amanda and I packed weekend bags and got back in the Jeep to head to Chicago.

And we had some fun, including going with my mom to see Hamilton and then to have dinner looking out at the Chicago river.  Pictured here is Amanda, enjoying a swanky adaptation on the corn dog — a lobster dog.  The lobster dog is something you’d have assumed we’d encounter out East, but, no, we had to come to Chicago to find it. 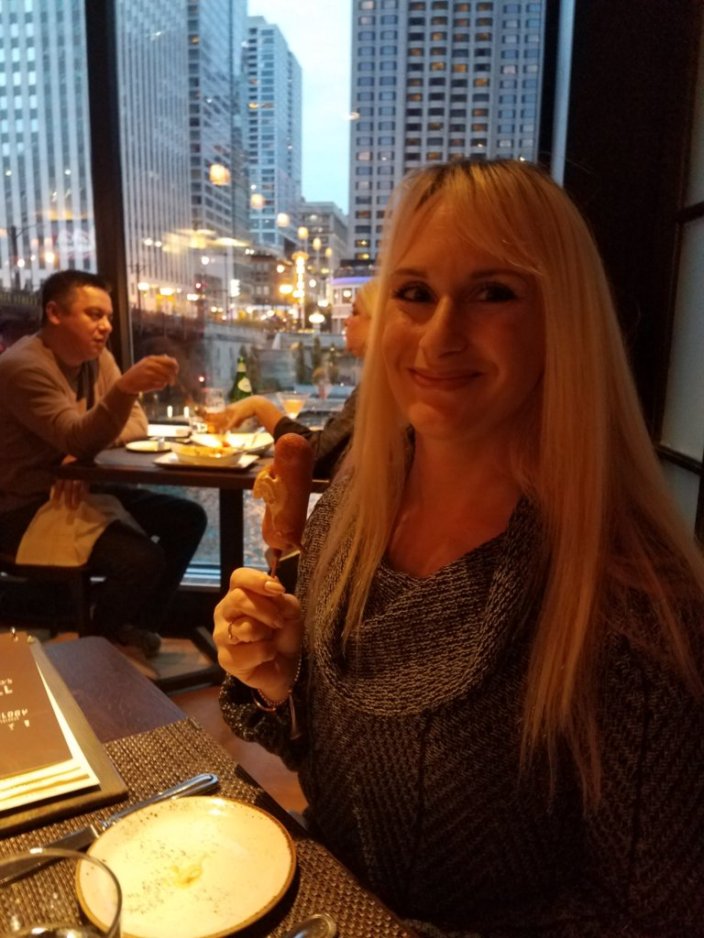 This is a pretty thin digest.  Between traveling from Vermont to Michigan to Chicago to Michigan, I’ve kind of not produced much content.  Don’t worry, though.  I’ve got several more things coming out in the next few weeks.  In the interim, though, here are some videos:

And, as always, have a good weekend.