If you follow the DaedTech digst/slow-travel chronicles, you’ve probably noticed a theme.  I answer questions about slow travel and I offer general snippets into our life and what it’s like.

Usually, this probably makes it seem glamorous, or at least interesting.  We go cool places and do cool things.  But there are also aspects of it that can be weird, awkward, tiring, or even altogether negative.  I probably don’t talk about that enough, so let’s change that today with a little story.

A Day Trip to Montreal

We’re spending a month in a town called Newport, Vermont.  If you follow that maps link, you can see that we’re close enough to Canada that we could walk.  Seriously.  It’d be a pretty decent hike, but if we bundled up and made a day of it, we could walk to Canada.

So, naturally, we decided while we were here to visit Canada.  But, walking across the border wasn’t exactly what we had in mind.  So we headed to Montreal, a 2 hour drive, for a long day trip.  And we had a great time the whole day, from morning to late at night when we were driving home after midnight.

At least, we had a great time until we arrived at the US-Canada border and had to go through TSA, driving edition, at the border.

Usually, Border Crossing is a Non-Event For Me

Let me say at this point that I don’t know for sure why the customs guy treated us like we were smuggling black market textiles or whatever.  But I think it happened because our slow travel lifestyle blew his mental stack, which flipped him over into suspicious mode.

Now, I’m not exactly a cross-border commuter.  But I’ve driven across both US land borders enough to have a sense of how it goes for me, normally.  It ranges somewhere between “two halfhearted questions about where I went and why” to “wave indicating not to bother rolling down the window.”

I should say a couple of things at this point.

And it was certainly different.

At about 1 AM, at the border crossing to Derby Line, Vermont, let’s just say that there isn’t a steady stream of traffic.  In fact, of the 20 minutes or so we spent being grilled by the border guy, the only other car that pulled up was right at the end (and might have been responsible for the merciful end to this bit of geographic bureaucracy).

So it’s a quiet scene.  An out of the way two lane highway giving way to 3 customs-toll-booth things only.

Fear and Loathing at the Border

At first, it seemed mostly unremarkable.  He asked that we roll down the back window, but it was the standard “where did you go and for how long?”

But then things got weird.

I quickly felt like I was in a procedural crime drama, and he was playing the part of Detective Goren.  I realized that he was asking syncopated questions to try to poke holes in my story.  He must have been a Criminal Intent fan also.

“Why did you go to Montreal?”

“Take out your car registration, please.”

“Where did you eat dinner in Montreal?”

“What’s the name of your street at home?”

“Turn off the car, please.”

“What’s the name of your business?”

“What did you say was the reason for going to Montreal?”

“Show me the confirmation for your AirBNB.”

It went on like this for 20 minutes while he popped our back hatch, searched the spare tire compartment, and alternated between three streams of interrogation.  I was on the tired side of 4 hours of roundtrip driving and a full day of walking around and exploring a city.  So I was not at the top of my game, and had a great deal of trouble by the end not making exasperated wisecracks about whether he wanted me to put my liquids in a separate plastic bag.

Why Did This Happen?  I Have a Guess

So, what gives?  As I said, I don’t know for sure.  It could be that he has a randomizer in his booth that alternates between “wave ’em through” and “do your best Porfiry immitation.”

But I think it was my answers to the initial stock questions.

We live in Michigan, theoretically.  And yet, here we were crossing the Canadian border in some remote location in Vermont.  We’d crossed from there for only a day trip, and told him that we were staying in Newport which is, apparently, a tiny town that attracts few visitors.  (The border agent even asked us dubiously, “what made you pick Newport” with a familiarity-breeds-contempt sneer for his surroundings.)

When he asked if were were in Newport for vacation, we exchanged a look and said, “sort of.”  When he asked how long we were there, and we told him a month, he scowled.  And then the syncopated interrogation began.

So, in the end, I think we found ourselves subjected to a protracted grilling and search because our life did not compute to this guy.  This happens in plenty of other contexts.  Heck, it takes this entire blog to explain how our life works.  But it doesn’t all that frequently happen in a context where someone has the ability to turn their own lack of understanding into a mildly threatening problem for us.

Live and learn, I suppose.  Not all slow travel stories are fun or glamorous.  But was it worth it?  It sure was.  Check out this view of Montreal from Mount Royal. 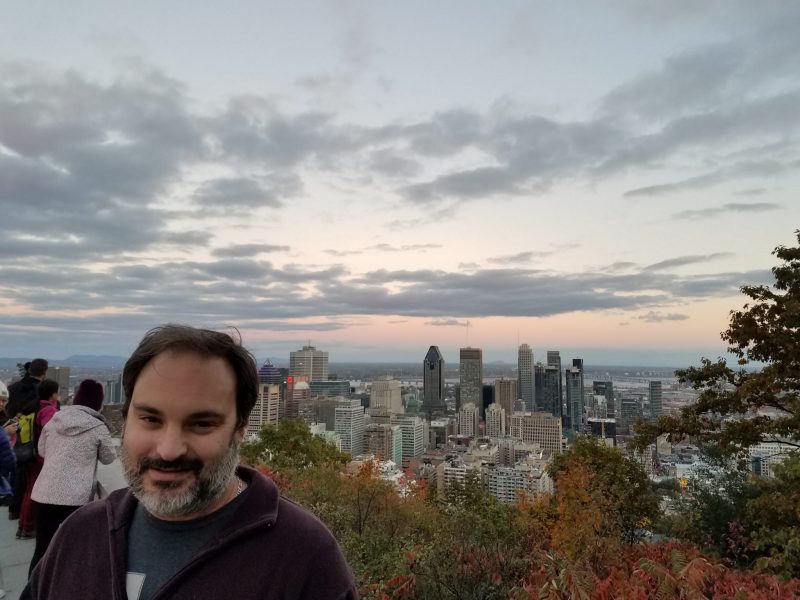 Usually these posts are fun and upbeat, but this one was a little different.  So let’s pick the positive energy back up with some picks.

And, finally, the digest.

With that, as always, have yourselves a great weekend.

Your point about eating lobster reminded me of some fun lobster facts:
– When the first European settlers reached North America, lobsters were so plentiful that they would reportedly wash ashore in piles up to 2 feet high.
– Dirt-cheap because they were so copious, lobsters were routinely fed to prisoners, apprentices, slaves and children during the colonial era and beyond. In Massachusetts, some servants allegedly sought to avoid lobster-heavy diets by including stipulations in their contracts that they would only be served the shellfish twice a week.

In my experience, any unusual pattern, or a usual but suspicious one, will trigger scrutiny at the border. I ran into it once driving back to Canada from a day trip to the US, as a young man by myself driving my own almost-new car.

BTW, you seem to have forgotten the other must-try in Montreal: smoked meat on rye!

I’ll have to go back sometime and give it a try. I wish we’d had more time there, so I’m looking forward to having an excuse to go back.

If you went on 17th – that’s the day Canada legalized marijuana. Maybe they thought you went because of that.

We were there on the 13th, so I guess we just missed it. I had no idea that was in the works, though, which was interesting. I remember being in Denver right before it was legalized in Colorado, and there was no mistaking what was about to happen because of signs and whatnot.