DaedTech Digest: Up and Leaving

For the last few weeks, I’ve paused with my normal Q&A about slow travel, in favor of writing about actual adventures.  I’ll do that one last time here today.  I’m sitting in Michigan right now, fresh off of a month in Vermont.  But we only just got in this evening, having left Wednesday morning.

And that made me think about the subject of leaving.  Nobody has asked, so it’s not Q&A.  But I figure, while it’s fresh in my mind, it’s worth talking about the end of a slow travel stint.

What happens when it’s time to go?  How do we prepare to leave?

Leaving from a slow travel stint tends to be easier than getting ready for one.  Amanda typically sets about packing a few days ahead, but I mostly stick to “night before and morning of” in some combination.  Packing is pretty easy, since it just involves rounding up everything that’s yours and leaving everything that isn’t.  For us, that’s mostly clothes and electronics.

But packing is only one part of the equation.

There’s also concluding any local business.  For us, this usually means going and closing out with a place like FedEx Office, where we’ve opened a local mailbox for forwarding.  But it might also mean wrapping up other things, like a local gym that Amanda has temporarily joined.

We stay in AirBNBs or VRBOs, which means we’re staying in individual people’s properties.  Sure, they’re optimized for vacations or stays, but they’re still other people’s places.  And unlike staying there for a few days, stuff goes wrong or weird when you stay places for months.

For instance, we accidentally cracked a bowl the other day.  So we bought the owner a new set of bowls at a local store, hoping that this would make up for the trouble.  We also re-stocked his carousel with K-cups, since he was nice enough to leave it stocked for us.  Getting ready to depart generally involves this sort of courtesy accounting.

Here’s another consideration.  As I’ve mentioned before, we take our pets with us.  And, as any pet owner knows, they’re messy.  So there’s always a pass to see if the cats have been doing anything horrible while we’ve been there, and remediating any issues we find in this sense.  They’re generally fine, but if they’ve puked on the hardwood somewhere or whatever, best not to leave that for anyone else.

What about having fun?

And then, finally, on the fun side, there’s last hurrahs.  You go to your favorite food spot one last time, take one last stroll through town, do one last jog… you get the idea.  For our last weekend in Vermont, we wanted to do some serious outdoors-y stuff, but the weather didn’t really cooperate.  So, instead, we did a lot of driving, ranging out into New Hampshire and Maine.  It wasn’t plan A, but it did yield some lovely views from the car, like this one. 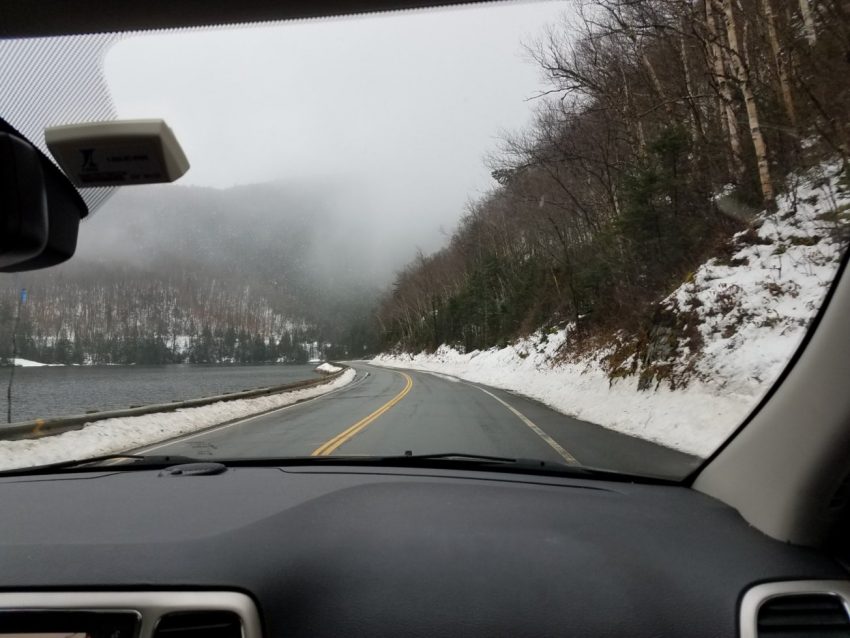