DaedTech Digest: Living Our Life at the Isle of Palms Beach

The Charleston metro area is great, as I briefly described a couple of weeks ago.  And, since then, we’ve seen even more of the city, treating ourselves to some additional excursions and adventures in the city proper.

But today, I’d like to talk about where we’re actually staying, and what life there is like.

We’re in a town called Isle of Palms.  Not surprisingly, it exists on an island — a barrier island, to be exact.  And Isle of Palms is maybe a 15 minute drive from Charleston proper, and 2 towns over.

If you live in or around a major city, you might map this to a bustling suburb, but that’s really not the case.  Charleston is actually quite a small city, and these beach outlying areas really do not feel like suburbs.  They feel like, well, beach destinations.

So it’s like we’re staying in the kind of house you might have gone to with your family as a kid for a beach week during spring or summer vacation.

Living at the Beach

As I mentioned last week, we’re setting aside some time where we’re not going full tourist and not working.  We want to relax.  And, where better than the beach?

So our life here has settled into a nice, sustainable cadence.  We’re working as we normally work, whether at home base or vagabonding, but we’re enjoying more success in not over-doing it.  This, combined with not booking our free time with wall-to-wall excursions, has given us some enormously enjoyable downtime.

And we’re making the most of it.  This has included:

Now, before you think that we’re living the life described in that Beach Boys song that lists every Caribbean destination in existence, understand that it’s actually not super warm here.  Daytime highs have ranged from the mid-50s to the mid-70s.  So a lot of these beach excursions involve shoes, jeans, and a hoodie.

Also, understand that it is apparently “sand gnat” season here.  These things put mosquitoes to shame.  If I’m not careful to put on bug spray for night beach visits, my forearms wind up covered in itchy welts.

So, it’s not tropical vaction.  But it is warm-ish, peaceful, beautiful, quiet, and surprisingly private, for a beach destination at spring break.  We’re packing up to head to Atlanta in about a week.  But our time here at the scenic Isle of Palms beach has been restorative. 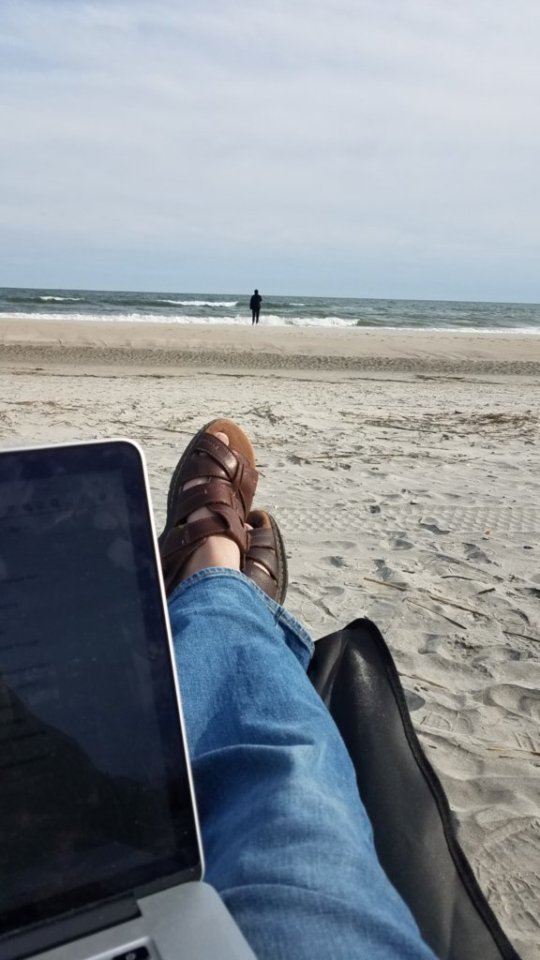 Hey Erik – glad to see you’re checking out dev.to! I’ve been getting involved over there for the last few months and it’s a really good community. I’m sure your writing and contributions would be really well received there.

Thanks for the kind words!

If you have any suggestions for how to engage with the community and grok its rules/norms, I’d love to hear them.

For sure! Here’s my brain dump: One thing is it’s totally normal and acceptable to leave comments stating simply “Great post” or the like. Ben (co-founder of the site) has stated that while many other tech communities frown upon comments like this that allegedly “don’t deliver value”, he thinks that’s a dumb rule (and I agree). While this might seem like an inconsequential thing to note, I think it’s important in that it is indicative of the larger ethos of the community, which is one of just being friendly and helpful. Another thing that other communities look down on but… Read more »

That’s definitely a help, thanks! So it sounds like the best way to engage the community is to be active in discussions, to post content, and to generally be supportive?

Do companies have accounts and sponsor things there, or is the community entirely individual dev-oriented?

Yeah pretty much – useful content that helps people solve technical and career problems seems to go over better than “thought leader” pieces or technical for the sake of being technical pieces.

They do have some company sponsors that show up in each weekly email digest, and I know there are posts written by individuals who happen to work at Twilio, Microsoft, etc. that post things with their company “flair” (like this for example: https://dev.to/twilio/-emoji-translations-with-the–twilio-api-for–whatsapp-and-nodejs-486d).

But I’m not sure if those particular posts get more time on the front page or boosted in anyway.

Hmm… dev evangelist is almost certainly in it, at least partially, for the backlinks. Do they have any guidelines on what’s too spammy or self-promote-y?