We’ve now been in Isle of Palms, near Charleston, South Carolina, for two weeks.  Last week I talked about our journey from Texas and settling in here.  This week, I’ll talk entertainment.

There’s a certain cadence and pattern to your entertainment as a slow traveler.  I wrote once about how I consider myself a perpetual tourist.

So the cadence usually involves settling in, picking the quintessential tourist things to do, and then scheduling those.  Then, once you’ve gone through all of that, you start to look for lesser traveled, but still unique, local stuff.

You tend to keep your foot on the gas because, almost by definition, your time everywhere is fairly limited.  I mean, we could always stay places longer if we felt like doing so.  But the point is to experience and then to move on.

The upside to this approach is clear: a lot of variety, a lot of experiences, and a lot of fun.  But the downside comes in various forms as well: little time to rest, a tendency to overspend, and the risk of feeling that you could always be finding more things to do.

The Decision to Relax

So on this trip, we’ve changed it up a bit.

In the first place, we’ve decided to take a day or so each week just to relax.  We’re at the beach after all.  In the second place, we’ve stopped worrying as much about “what are the local must-dos” and decided instead to feel no obligation.  We’re just doing as the spirit moves us.

And this has been a lot of fun.

This past weekend, we booked two different AirBNB experiences, neither of which cost very much and both of which involved adorable and interesting animals.  The first experience involved bottle feeding baby goats.  And the second one, as pictured below, involved taking an anteater for a walk and interacting with other exotic animals.

None of this was uniquely Charleston, per se.  And none of it was what people might consider iconic around here: sailing, visiting Hilton Head, or whatever.  It was just fun, unique, and what we felt like doing.

So here’s to a form of slow travel where we work in a feeling of “relax and take what comes.” 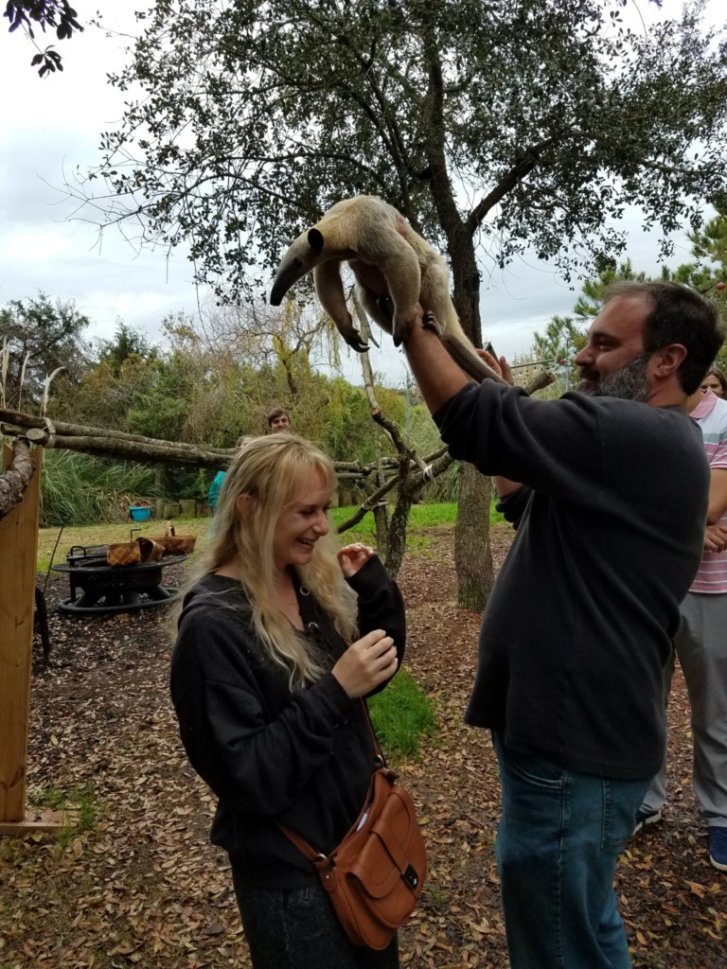