This might be my favorite question yet.  Every week, I post one of these slow travel digests, and a lot of them involve answering questions that people ask Amanda and me about our slow travel lifestyle.

Some of these questions are straightforward:

But this one… this one isn’t straightforward.  It’s not relevant to most people that travel for a few days or a week… at least, not for the most part.  But for those of us who are starting to number their time spent in AirBNBs in years, it’s surprisingly relevant.

The Question: How Do You Handle It When You Break Stuff in a Host’s House?

You remember this concern from your days renting.  You’re in a place for 6 months or a year or something, and you mostly try to take care of it.  But then you break something.

And I don’t mean that something breaks on you.  This isn’t the porch light going out or the oven mysteriously not working one morning, where you call the super.

This is you tripping and putting your hand through a screen, or you having hands wet from rinsing dishes and dropping some glass bowl that shatters.  The only call you can make is to the host, to say “hey, sorry, I broke stuff.”

This is a uniquely large danger, given what Amanda and I do.  When you lease an apartment, the landlord leaves you only appliances, carpet and drywall.  When you stay in a hotel, you have things, but you’re not there long enough for them to break.  But now imagine Amanda and me, vagabonding.

Our hosts leave us furniture, dishes, appliances… everything.  And we stay for months.

So What Do We Do?

Well, of course, the first thing we try to do is be considerate.  We’ve spent something like a year of our lives in AirBNBs, and, yet, to this day, we’re still way more careful in them, by far, than our own places.

2. Hide the Nice Things that Don’t Matter to Us

Let’s say that we arrived in a place and found a lovely Ming Vase.  We’d look at it, appreciate it, and then carefully put it away somewhere.  Much as we enjoy aesthetics, we try to minimize our exposure to stuff that the owner might prize.

For Amanda and me, this involves putting away a lot of stuff, particularly since we’re always bringing pets with us.  Any of you cat owners will know that vases are a non-starter.  But we have a routine for identifying and hiding anything that we think the cats might mess up and that either of us might mess up.

In fact, we’ve got this down to such a science that one of our arrival tasks is to scan the place for things to put away. We take a lot of pictures immediately upon arrival, noting where everything is.  Then, we start shoving expensive-looking or cat-mischief-attracting things into closets.

When it doubt, hide it until departure.

Every now and then, in spite of our best efforts, things happen.  We forget to use a coaster on a table or Amanda slaughters a towel with mascara, or whatever women slaughter towels with.  I could go on, but why bother?  It’s the same kind of thing that happens regularly in all of our houses.

Amanda and I have stayed in people’s houses for months at a time.  We’ve befriended our landlords.  I mean, literally.  We’ve gone out to dinner and thrown back drinks with the folks that rent us their places.  (Good business on their part, since we become de facto big customers, given our arrangement.)

And what we’ve learned is that AirBnB/VRBO/landlord types build minor mishaps into their business model.  They’d rather you use coasters and not slaughter towels, but they account for these things as part of the cost of doing business.  Booking for 3 months instead of 3 days at at time is worth losing a few towels.

Don’t use this as a carte blanche, by any means.  But don’t freak out if you mess up the non-stick coating on a random frying pan in the place.

4.  Follow the Boy-Scout Principle When You Notice: Leave it Better than You Found It

This last bit of advice seems to contradict the last.  But that’s unavoidable, because the back-and-forth between them is really a judgement call.  The last piece of advice is that you should replace stuff, when you think it’s fair (and when you notice).

To make things more tangible, here’s an example.  At our current place, in Austin, our host has a nice, lofted space that I claimed for my office.  Whereas a lot of places we go don’t have a desk setup, this one not only had a desk… it also had a nice desk chair, a side desk, and a shelving unit.  I was in work-heaven.

But, after settling in for a couple of days, I realized that the desk chair wasn’t exactly perfect.  Most of its wheels didn’t slide any longer and one of its arm rests wouldn’t stay fixed in place.  In spite of these imperfections, it did the job.  Well, at least, until it didn’t.  I was on a call one morning and I happened to lean back, which prompted one of its wheels to… implode.  I can’t think of a better way to describe it.

The chair just crumpled, I fell over, and the folks on the call were asking loudly if I was okay while I laughed.  I was fine and the chair was even mostly fine, with the exception of a wheel that just no longer existed.  C’est la vie.

So I did some mental math. Landlord’s old crappy chair.  Didn’t owe him anything, and could probably have sued or something.  But, instead of any of that, I realized that I had another 5 weeks to spend here and that I wanted an office chair.  So, we went to Target, spent $50, replaced it, and sent him a note saying, “your chair broke, but we bought you a new one.”

I recommend this approach when it makes sense.  It builds pennies in heaven for when you deploy the strategy in (3).  It also makes you feel a little better about yourself.  And, finally, it keeps your place looking beautiful, like this. 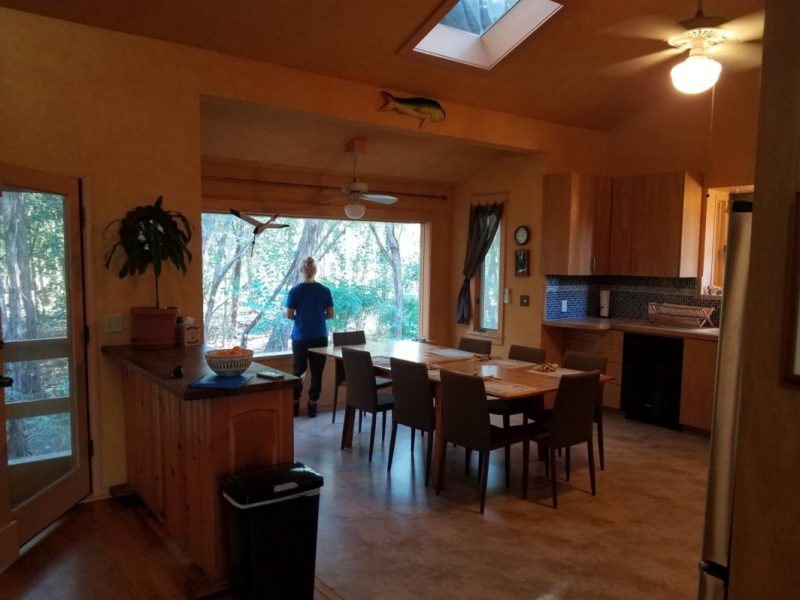 This is another week where my internet contributions have been, “meh.”  I won’t bother to promise better things, but I will say that it’s likely I’ll have more videos and posts soon-ish.