Breaking Free of the Golden Handcuffs

Category: You Asked For It Tags: Career, Soft Skills

In a comment on my post about how to resign from your company, I was asked about advice for a situation where you don’t like your job, but they’re paying more than any other competitors in the industry.  In other words, what to do when leaving the company would mean that you’d personally take a haircut, financially speaking, and have to go somewhere for a smaller paycheck.

I refer to this situation as “golden handcuffs,” though I Think that term applies more to firms specifically offering you financial incentives aimed at retention, such as delayed vesting in your 401K, lump sum bonuses for staying on, etc.  I personally think that a salary well above fair market value (which is, ipso facto, what we’re discussing here) is just another form of this — we’ll make you stay by offering you money you can only make by staying.

But regardless of terminology, the question is, “what do I do about this state of affairs?”  As I see it, there are a number of solutions.  I’ll briefly cover some common sense ones first, and then get to the more interesting solutions.

First of all, you could always just leave and take a reduced salary.  You’d obviously need to set your affairs in order financially to accommodate for the lower paychecks that would be coming your way.  A good way to do this might be to estimate what you’d command on the market, ratchet down your budget accordingly, and put the surplus in savings for a bit to help smooth the transition when you do make the move.

Another obvious solution is that you could simply “suck it up” and keep at your current job.  It’s all well and good for people to say “money isn’t everything,” but money does have real world, practical uses, like medical bills, mortgages, and children’s tuition.  It might be that, however much you don’t enjoy what you’re doing at work, you need the money and will just have to grin and bear it (though this can be a reasonably temporary solution where you bide your time until you’re clear of some obligations).

Last up here is the Hail Mary, which is sort of a modified version of “suck it up,” wherein you go out looking and interviewing but with the stipulation that you receive pay comparable to what you currently get.  It could always be that you’re simply assuming that you’re overvalued but really you aren’t.  Honestly, the single biggest predictor of your next salary is your current salary.  You might be surprised at how readily a new firm will pay you what you’re making or a bit more.  But, if you’re accurate in your self-valuation, you wind up in “suck it up” mode indefinitely, but at least you’re constantly looking.

Now, with those out of the way, here are some interesting options.

So, you have a job that you really don’t like and you’re there 40 hours per week (and not a minute more, amirite!?)  Perhaps you don’t even give them quite that many because of organizational inefficiency or unstructured-unstructured time and maybe that’s even why you want to leave.  Whatever the case may be, there’s a decent chance that you’re not exactly dedicating all of your spare brainpower to your current gig for as long as your golden handcuffs keep you and the company reluctantly married.

Take some of your spare time (or perhaps some of your unstructured-unstructured time at the office) and secure another line of income.  This could be something like moonlighting or consulting for money, but the reality here is that you’re tying up extra hours on top of (or in lieu of) current work hours.  So, even if this gets you extra income to make the jump to something lower paying, you might have to work 40+20=60 hours at the new gig to have the same income as just 40 at your current gig.

A better solution is to work on something that generates passive income for you.  It could be something like a rental property (I mean, you typically don’t wind up with golden handcuffs without a bit of gold in the mix), but it could be something more in line with your day-to-day.  For me, Pluralsight authorship has helped to give me a decent amount of career flexibility.  Perhaps you could monetize a blog, write a book, or something else along these lines.  This is not an overnight solution, but it’s a career option to consider over the long haul.

(Please note, I’m not encouraging you to misappropriate your company’s time to pursue your own financial interests.  If you choose to do that, it’s purely your own ethical conundrum — I’m encouraging you to economize downtime not otherwise accounted for, such as commutes, quiet home time, or cases where you literally have nothing to do at the office and couldn’t even be helping the organization with a side project)

Speaking of what to do in your spare time that could help, how about brushing up or solidifying your credentials toward the next career step?  Are you a software developer?  Time to shoot for Senior Software Developer.  Already a Senior?  Shoot for Architect?  Already an Architect?  Dev Manager.  You get the idea.

This type of career jump can be somewhat hard to negotiate, but it comes with an expected increase, that, in the case of golden handcuffs, might translate to a lateral move from a salary perspective.  However, it’s anything but lateral for you as you’re now in a position to resume a career of growth and get COLAs and merit increases that pace the industry.

Admittedly, this can be difficult, but it can also be doable.  Identify the position title that you’re after, and then look at common job descriptions for it, focusing on the responsibilities.  Those are the things that you want to be able to tell people in an interview that you are currently doing.  So, if you’re gunning for Architect, ask to sit in on formal code reviews or architecture meetings or whatever the grand code poobahs at your company do.  Work your way into these types of responsibilities and then, in interviews for this career-advancing move, you can say, “well, it’s not official in my position title, but I have been doing the role of X for a while now.”  It’s not as much of a no-brainer as going from Architect at Acme Inc to Architect at Beta Inc, but it should get you a fighting chance.

So, let’s say that you lack the spare time to secure passive/other income (perhaps you hate your job because they work you 60 thankless hours per week) and you don’t think you can swing a non-lateral promotion.  What you can do is identify why you’re comparably devalued on the market and then do something about that.

A common scenario might be that you’re using dated or obscure techs.  Your company pays you handsomely to maintain a maze of code written in Cobol and VB5 because there are like 4 other people in the world with that combination of skills and they refuse to lose you.  Meanwhile, you hate writing code in Cobol and VB5, but recruiters aren’t exactly knocking down your door and calling you a “A Full-Stack Ninja Rockstar.”  Well, your company is probably good and hosed no matter what, but there’s no need for you to keep sinking with that ship as they buy weird, old decommissioned machines capable of running a compiler that no longer exists.

If you have spare time, start writing some Ruby or C# or whatever in your spare time.  If you don’t (because they’re mercilessly working you 60 hours per week), start finding ways to bring the new stuff into your day-to-day.  Sell management on letting you write some new functionality in a more modern language.  Or just do it, reasoning that it’s better to beg forgiveness than ask permission.  Find a way to get some kind of modern tech plausibly onto your resume, and watch your options improve.

I’m not sure who said it originally, but I first heard a quote that I love from the .NET Rocks guys.  “Change your company… or change your company.”  The context, as you might imagine is that if you’re unhappy, you should try to change the way your company does things and, failing that, you should leave for a more suitable company.  What I’m advising you, Golden Handcuffs, is actually the converse of that — quitting ain’t an option for you, so try changing your company. 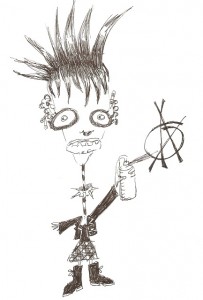 A company offering you golden handcuffs presumably needs you around.  This gives you some bargaining leverage.  If you’re exhausted or miserable because of working conditions, talk to HR about it.  If it’s the techs or the fact that you’re surrounded by Expert Beginners, start a grassroots movement toward improvement.  Or, perhaps, secure an assignment where you’re more on your own and can have some creative freedom and autonomy.

The key here is to identify the things about the company that make you happy and develop actual strategies for addressing them.  Changing an organization can be exhausting and it’s often a long-play, but it’s doable.  In my career, at times, I’ve emerged from such efforts battered, tired, and war-torn, but ultimately successful to some degree.  You can do this too — the pay is already good, so make the rest of it good.

Time Is On Your Side

To wrap up, I’ll note that the one common thread here in your favor tends to be time, provided you’re not just twiddling your thumbs, running out the clock to retirement (and even then, you might argue that it’s on your side).  Most of these solutions take time to implement and will have a higher probability of success, the longer that you can stick out your current situation.  For instance, I’ve implemented organizational changes that only really took root after I’d left, and it took me years of blogging, writing, and mentoring before I turned any of my moonlighting activities into passive revenue streams.  Had I been desperate for a change but unable to secure a competitive paycheck, these things wouldn’t have been my game-changer by any means.

It may sound like cold comfort if you’re in this situation right now, but assuming you can’t simply take the income hit or continue to suffer indefinitely and check out, you’re going to have to strategize and bide your time.  But it’s my experience that once you lay out a plan and start acting on it, you’ll feel a renewed sense of purpose and see that proverbial (cliched) light at the end of the tunnel.  There’s a pretty good chance, in fact, that lacking a feeling of real purpose is at least part of what’s bumming you out about your job in the first place, since it’s clearly not money.  Here’s a chance to take it back.