Because I Said So Costs You Respect

Do you remember being a kid, old enough to think somewhat deductively and logically, but not old enough really to understand how the world works? Do you remember putting together some kind of eloquent argument about why you should be able to sleep at a friend’s house or stay out later than normal, perfecting your reasoning, presentation and polish only to be rebuffed? Do you remember then having a long back and forth, asking why to everything, only to be smacked in the face with the ultimate in trump cards: “because I’m your parent and I say so?” Yeah… me too. Sucked, didn’t it? 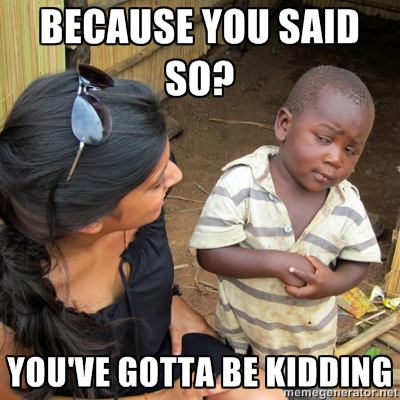 There are few things in life more frustrating than pouring a good amount of effort into something only to have it shot down without any kind of satisfying explanation of the rationale. For children this tends to be unfortunate for self interested reasons: “I want to do X in the immediate future and I can’t.”  But as you get older and are motivated by more complex and nuanced concerns, these rejections get more befuddling and harder to understand.  A child making a case for why he should own a Red Rider BB Gun will understand on some level the parental objection “it’s dangerous” and that the parental objection arises out of concern for his welfare. So when the “enough — I’m your parent and I say so” comes up it has the backing of some kind of implied reasoning and concern.  An adult making a case that adopting accounting software instead of doing things by hand would be a money saving investment will have a harder time understanding  an answer of “no, we aren’t going to do that because I’m your boss and I say so.”

This is hard for adults to understand because we are sophisticated and interpersonally developed enough to understand when our goals align with those of others or of organizations. In other words, we reasonably expect an answer of “no” to the question “can I go on vacation for 8 months and get paid?” because this personal goal is completely out of whack with others and with an organization’s. So even if the explanation or reasoning aren’t satisfying, we get it. The “because I said so” is actually unnecessary since the answer of “that makes no sense for anyone but you” is perfectly reasonable. But when goals align and it is the means, rather than the ends, that differ, we start to have more difficulty accepting when people pull rank.

I remember some time back being asked to participate in generating extra documentation for an already documentation-heavy process. The developers on the project were taking requirements documents as drawn up by analysts and creating “requirements analysis” documents, and the proposal was to add more flavors of requirements documents to this. So instead of the analysts and developers each creating their own single word document filled with paragraph narratives of requirements, they were now being asked to collaborate on several each with each subsequent version adding more detail to the document. So as a developer, I might write my first requirements document in very vague prose, to be followed by a series of additional documents, each more detailed than the last.

I objected to this proposal (and really even to the original proposal). What I wanted to do was capture the requirements as data items in a database rather than a series of documents filled with prose. And I didn’t like the idea of having several documents with each one being a “more fleshed out” version of the last document — there’s a solution for that and it’s called “version control”. But when I raised these objections to the decision makers on the project, I was rebuffed. If you’re curious as to what the rationale for favoring the approach I’ve described over the one I suggest, I am as well, even to this day. You see, I never received any explanation other than a vague “well, it might not be the greatest, but we’re just going to go with it.” This explanation neither explained the benefit of the proposed approach nor any downside to my approach. Instead, I was a kid again, hearing “because I’m your parent and I say so.” But I wasn’t a little kid asking to stay out late — I was an adult with a different idea for how to achieve the same productivity and effectiveness goals as everyone else.

In the end, I generated the documents I was required to generate. It wasn’t the end of the world, though I never did see it as anything other than a waste of time. As people collaborating toward a larger goal, it will often be the case that we have to do things we don’t like, agree with or approve of, and it might even be the case that we’re offered no explanation at all for these things. That is to be expected in adult life, but I would argue that it should be minimized because it chips away at morale and satisfaction with one’s situation.

Once, twice, or every now and then, most people will let a “just do it because I say so” roll off their back. Some people might let many more than that slip by, while others might get upset earlier in the process. But pretty much everyone is going to have a limit with this kind of thing. Pretty much everyone will have a threshold of “because I say so” responses beyond which they will check out, tune out, leave, blow up, or generally lose it with that in some form. So I strongly recommend avoiding the tempting practice to “pull rank” and justify decisions with “because it’s my project” or “because I’ve decided that.” It’s sometimes nice not to have to justify your decisions — especially to someone with less experience than you and when you’re in a hurry — but the practice of defending your rationale keeps you sharp and on your toes, and it earns the respect of others. “Because I say so” is a well that you can only go to so many times before it dries up and leaves a desert of respect and loyalty. Don’t treat your coworkers like children when they want to know “why” and when they have legitimate questions — they deserve better than “because I’m in charge and I say so.”

[…] I discussed in a previous post, a leader/manager issuing orders “because I say so” is incrementally losing the respect […]