Starting to Unit Test: Not as Hard as You’d Think

I happened to read a post by Dror Helper the other day, in which he said:

I believe TDD and “unit tests” has been done a great injustice by not giving it a cooler name – preferable one that doesn’t have the word “test” in it – because it’s a PR disaster!

Wow, that had never occurred to me, and yet he’s spot on. “Unit test” is a wretched name for anything. It seems somehow to combine all the worst elements of propagating uncertainty in arithmetic with lab measurements and double checking all of your answers on a scantron exam. I just bored myself half to death typing that sentence, so it’s little wonder that the concept of a “unit test” is often met with a visceral “ugh.” I mean, we could at the least call the test suite a “verification checklist” or something, implying that you’re marking progress as you complete things. It’s not exactly a skydiving trip, but it has to beat “unit test.” But I digress.

The lack of appeal of the name, the feeling of already being pressed for time without taking something else on, and the natural resistance to the unknown all create barriers to entry when it comes to unit testing. In order to get started yourself, or especially to convince those around you to do the same, it’s necessary to overcome those barriers. I have a good bit of experience with this in a variety of environments and from a variety of roles. Over the last year, I did a string of blog posts that were essentially my talking scripts for a series of power point/demo talks I gave. These were meant to be an introduction to unit testing.

The series actually became pretty long, and as I was finishing it, I decided to put it into E-Book format. So, with the help of my editor, we turned it into fluid book, and with the help my publisher, we published it in all major E-Book formats for a cost of $4.99. Here is the book on the publisher’s site, and here is a link directly to Amazon

The title of the book is “Starting to Unit Test: Not as Hard as You Think,” and I feel that the title really captures it. My goal was to trade practice purity for reducing the barriers to entry. In other words, the message was, “don’t feel like you have to start full bore with 100% coverage, TDD, and anything less is a failure — if you just introduce a few tests into a few places in your code, consider that a win.” I also did something else that I haven’t seen others do as much, which is to explain that some types of frameworks and code present unit testing nightmares, and that newbie unit testers should avoid them until they reach a higher belt.” What I’d like to see people take away from this book is a feeling of satisfaction from experiencing a sequence of small but real wins. 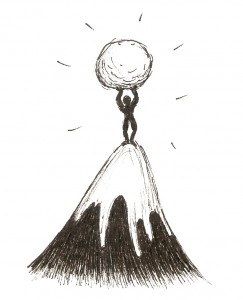 For you mythology buffs, this is Sysiphus actually making it to the top of the hill.

By and large, you could get this content by reading through my blog posts on the subject, but if you want it in a compact format, here it is. Not to mention, if you’re trying to sell your team on the merits of unit testing, a book is probably going to have more cachet than a series of blog posts, and the one link to the book is going to be easier to distribute than the giant collection of links for the individual posts/chapters. So get it if you’re interested, and encourage your team to get it if you’re trying to introduce the concept, especially since I close out the book by making a business case for unit testing (this making cases for best practices is actually going to be a theme of mine in the future).

Enjoy, and thanks for reading (the blog and, hopefully, the book)!

That’s $9.98 I’ve spent on your books so far. Keep up the excellent work. I will try to get my boss to buy this for our entire team.

Thank you! I very much appreciate the support and the kind words. I hope you (and your team, if applicable) enjoy!