The blog has been quiet for the last 10 days or so and that’s because, as I mentioned previously, I was heading off on vacation. We had a good time; a few days in Seattle, a brief stop in Vancouver, and then a cruise along the Inner Passage of Alaska, where we stopped in a variety of cities and towns. It was a lot of fun. I got to fly over glaciers and an ice field in a small sea plane, go on a whale watching boat ride, see glaciers calve up close, and get a good look at a lot of indigenous wildlife (yes, including grizzly bears).

A lot of this was accomplished via paid tours and group outings, and, apart from enjoying myself, I had the opportunity to bemusedly observe a phenomenon that I came to think of as “armchair tour guiding.” Let me explain with examples. On my sea plane adventure, we boarded a bus to head to the docking area where the planes were tied up, and our chaperon was a girl who introduced herself as a 2-week-since high school graduate and part time employee of the sea plane company. Not wasting any time, a blowhard on the tour started grilling her about the planes — their make and model, their type of engine, and various other things that skittered out of my consciousness since I’m neither a pilot nor do I play one after reading a bit of wikipedia. The girl looked a little flummoxed, and asked the bus driver, and between them they were able to answer at least some of the guy’s questions. “As you can see, I do my research,” the man said, not bothering to hide his smugness at all. I had the distinct impression that not having all of his questions answered was the exact desired outcome. He won a contest in which only he had competed and no doubt became an even greater legend in his own mind.

On another tour on the trip (they did an excellent job, by the way, if you’re ever in a position to check them out), we took a boat out into the bay near Juneau to watch humpback whales and whatever other aquatic life we might happen to see. Our guide was very knowledgeable, and we learned a lot about the humpbacks, other marine life, and the area in general from her. That is, we learned a lot when a handful of armchair tour guides on the trip could restrain themselves from vying for center of attention. There were several, but the ringleader felt the need, at times, to interrupt the tour guide to explain that she took a whale watching tour once in Monterey Bay and learned something different. I was pretty excited to hear from vacation-lady, since clearly, my girlfriend and I had shelled out $400 for the day to hear what some woman remembered of some California vacation she took once. That was superior in every way to hearing the expert we were there to hear. /sarcasm

Why do I harp on this on a technical blog? Well, because in a strange way it reminded me of being at technical user groups or conferences. In those venues, I’ve frequently sat in a room and listened to an audience member or two completely derail the presentation with questions about minutiae or grandstanding games of “stump the presenter.” I’ve sighed and rolled my eyes through long-winded ‘questions’ whose only purpose was clearly to brag: “So, how do you think this ‘Introduction to Java’ presentation can help someone who has written 16 compilers — someone like, oh, let’s say, me?” I tweeted about this once and vulgarly called it “Q&A-hole” but I think I like the ring of “Armchair Tour Guides” (or perhaps “Armchair Presenters” or “Armchair Experts”) better. 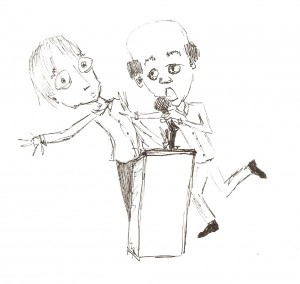 Don’t be that guy. Don’t be an armchair anything. It’s tempting for all of us, including me. Gameshows and games about trivia wouldn’t exist if possession of knowledge weren’t a fierce source of human pride, and it’s perfectly natural to want to showcase what you’re proud of, but this isn’t the venue. Even if you aren’t deterred by how rude it is to hijack a session, then be deterred by how unimpressed those around you actually are that you googled airplanes before a plane tour or that you once went on a tour somewhere like this tour or that you’ve played with the technology about which someone is presenting. Seriously — no one cares. Ask yourself who those in attendance have paid or come to see, and if the answer isn’t “you” then you’re going to have a really, really hard time stealing the show. People don’t walk out of those types of presentations thinking, “wow, I’m glad that one guy showed up and hijacked the presentation and man am I impressed with how much he knows!” They walk out thinking, “if that idiot is in another talk I plan to attend, I’m leaving.”

By all means, engage and ask questions of presenters, but, as an exercise, ask yourself whether others would find the answers to those questions interesting or helpful. If the answer is “probably not,” then wait until the presentation is over and engage the presenter one on one (or email him or her later or something). And, if you’re going to interrupt to share your own experiences, a better rule of thumb is, “don’t because no one cares.” Now, is this universally true? No. I’m sure there are examples you can think of where some witty audience member interjected a quip or corrected a presenter and it was actually valuable and helpful, but that is oh-so-rarely the case, compared to the number of times people do it, assuming it will be the case. I’m not offering hard and fast rules of existence, but rather guidelines for behavior that will make you far less likely to inspire annoyance and loathing in your fellow humans. It’s amazing how far common courtesy goes, sometimes.

Well said. I’d love to hear ideas on how to deal with this when it happens whether as the speaker or as an audience member. The company I work for has tried to have lunch and learns several times in the past, but there is always one or two “armchair tour guides” in the audience. I think it is a big reason that they keep failing. Who wants to stand up in front of their coworkers and get grilled to death?

I think in audiences of strangers or relative strangers, such as large user groups and conferences, that’s really up to the speaker (though it’s a tall order to sidestep distractions without offending). Not much an audience member can do. I’ve seen a handful of speakers do this well by gently steering the presentation forward with promises to engage after the talk. In a lunch & learn, that’s tougher, in my experience because the armchair experts there are typically Expert Beginners looking, at least subconsciously, to sabotage the activity, which is an existential threat to their organizational or tenure based authority.… Read more »