Some Changes to DaedTech Because I Want to Build a Thing

If I squint hard enough, I see an odd symmetry to my life that can be book-ended pretty simply with the phrase, “I want to build a thing.” I say this now, and I said it when I headed off to college, but I didn’t say it all that much in between. At least, I didn’t say it in the macro sense. But let me start the story a little before college.

As a kid, I was pretty equal opportunity when it came to academics. This was eventually born out somewhat empirically by my nearly identical SAT scores for math and verbal. So even though I had aptitude for math and the sciences, the first actual profession I aspired to in a non-childish fashion was to be a writer/novelist. I was pretty sure that I would make my living this way until it came time to apply to college. Here, I punted on a decision, applying to what I perceived to be the most rigorous major/school at each college and reasoning that I’d sort of force myself to make a decision. Mission accomplished. After weighing options and finances, Carnegie Mellon University in Pittsburgh was my best option and they were pretty good at Computer Science, so Computer Science it was. The world was enthralled with dot-coms, I’d always liked hacking around on my programmable calculators, I was told I’d be printing money when I graduated, and so I headed off to school saying, “alright, I’m gonna go build a thing!” 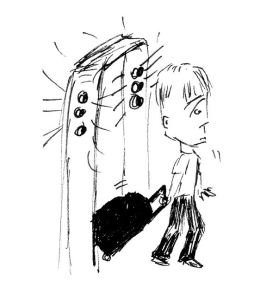 By the time I graduated, said dot-com bubble had just burst, and my aspirations lowered somewhat to, “I want a job that isn’t retail sales.” This eventually happened, and I contented myself learning the ropes of software development from a number of smart folks. But over the course of time, my goals started to evolve. I’ve always been an over-achiever, so I started to look at my place in the corporate world and think things like, “I want to be a senior developer” and then “I want to be an architect.” Also, as I improved in my craft, I started to chafe at being handed implementations that I didn’t agree with, which gave rise to “I want to be the lead/boss so that this is my call.” The result was a fairly predictable series of advancements and changes that culminated in my running an IT department.

And when that happened, I was so busy doing a victory dance around the flag that I’d planted that it didn’t occur to me to evaluate whether or not I enjoyed what I was doing. As it turned out, I did and I didn’t. I like solving problems, and leadership roles have their own problems to solve, but they tend to be a lot more abstract and subjective than their technical counterparts. So, I shipped out to go off on my own, working as a freelancer, craftsmanship coach, and consultant. This has been a lot of fun because I really enjoy mentoring, presenting, training people and writing. And yet… “I want to build a thing.”

I have a rather audacious vision of how my life ought to go at this point, and it doesn’t really involve any jockeying within corporate America, per se. I want to save enough and to create enough passive income that I can take on projects about which I am passionate, rather than trading hours for dollars to pay the mortgage and keep the lights on. And so I’m writing books. And so I’m making Pluralsight courses. And so I’m partnering with other companies to help them generate content. And so, in general, I’m trying to get creative to figure out ways to get myself closer to college me, striking out thinking nothing more complicated than, “I want to build a thing.”

Toward that end, you may have noticed a few changes to the blog, and there are going to be a few more relatively minor ones. The reason for this is that I’ve been operating the site and blog at a loss for more than 4 years, and I’m looking to at least break even and perhaps pull a bit of revenue out of it. Here’s what I have in mind:

Hopefully, you find all of this reasonable enough, because I absolutely love having a readership that enjoys the posts and is excited to comment on them and to reach out to me with ideas.  And I’m deeply appreciative of that and of you as a reader.  On the whole, very little is actually changing about the blog, and I’m not seeking to turn it into a full time job or a cash cow or anything like that.  I’m just hoping to take another in a series of small bites out of my need for week to week hourly income in the hopes that, after all of these years, I can get to the point where it’s finally time to build a thing.

“I want to save enough and to create enough passive income that I can take on projects about which I am passionate, rather than trading hours for dollars to pay the mortgage and keep the lights on”

A dream of almost every software dev i know 🙂 Good luck. Please share your experiences from this journey.

That (the sharing) I can promise to do. It’s pretty well ingrained in me at this point. 🙂

You inspired me to quit my job last month. I will most certainly buy you a beer. Now I just have to figure out this damn pay pal thing. 🙂

My wife had an account! I’ve told Brie a lot about you and she approved. 🙂

First off, thanks for the donation! And, in light of the donation, I’m assuming that the quitting has worked out well. It’s very gratifying to know that sharing my own experiences and observations helps people make decisions that bring them results they’re looking for. I appreciate the feedback.

Power to your elbow, mate

I had to look that up in the idiom dictionary, but now that I have, thanks! (Plus I have a fun new phrase to try out).

The design overhaul is very nice.

…only wish it had a slightly larger font. Thought Erik was talking about that when he said “If I squint hard enough…” ;o)

The theme has a place for generalized CSS, so I might spend a bit of time playing with the font size to see if I can enlarge it a bit. Thanks for the feedback.

Thanks, glad to hear it!

Inspiring stuff, Eric. Thanks for documenting the journey!

It’s been fun; thanks for reading! (And for your own posts, as well)

I miss the old geeky circuit board image.

Heh. I wanted to get that going at the top right, but there’s nothing in the theme for it. I could modify the theme I suppose, and I’ve actually been corresponding with the theme designer, but it’s not terribly high on the list at the moment.

Any chance the theme would support the ‘year’ in the time stamp circle? Sometimes I wonder how old a post really is. March 17th isn’t that long ago… or is it? 😉

I looked at this briefly, and there are no theme options for it as part of the GUI. I did do a few greps of the theme’s PHP and I think I see where this could be accomplished, but I’m going to wait for a pretty low traffic time before trying it out (I really don’t pull down the source and do proper sandbox trials anymore, so it’s usually quick edits in prod like an amateur). But yeah, I definitely understand your concern, since it’s harder for me to know when I posted things as well.