Feed Paper: Help Yourself To My Intellectual Property

When it comes to US intellectual property law, specifically patents as they pertain to software, I have a very scorched Earth philosophy. Don’t tweak it. Don’t reform it. Don’t debate over it. Don’t worry about it. Just delete it. Yes, to me, it’s like a nasty, tangled mass of bad code where it’s easier to get rid of it and address what breaks than it is to try to salvage it in its current form. I understand the need for patents on things such as medicines that have prohibitive startup investment cost, but when it comes to things like “gravity” effects on your cell phone, it’s just not worth having a system where established powerhouses can bury the little guy or blast away at each other and drive up costs, benefiting no one but lawyers. But, this post is not intended to spark a debate about ownership of ideas and intellectual property.

Instead, I’m putting my money where my mouth is. I’m going to give away what I think could be a pretty cool and viable idea. Why? Well, because I’m not exactly made of time, and I’d rather trade the small chance that I’d ever parlay this into a winning business idea for the slightly greater chance that someone might take it and run with it (or point me to it if it already exists). In other words, I want this thing enough that I just want someone to do it. Maybe one day I’d get around to it, but if you want to do it first, faster, and better, please be my guest.

Every day in my feed reader, an entry from Alvin Ashcraft called “Dew Drop” appears. Here is one such entry. It’s a link collection that he dutifully fills out every day, organizing by category. In the linked entry, he has “Top Links” at, well, the top, followed by Web Development, XAML, etc, ending up eventually with a set of other link collections and a book. You know what this reminds me of? A newspaper. I mean, the “Top Links” is pretty obviously “Front Page”, and then you’ve got your .NET equivalent of Business, Metro, Sports, Politics, etc.

Morning Dew is a nice collection of links, as are some of the others also linked in there (I personally look at Jason Haley’s and the Morning Brew a lot). And, if those weren’t enough, I have my own collection of links. Pictured here, in alphabetical order, are the ones that fit on my screen: 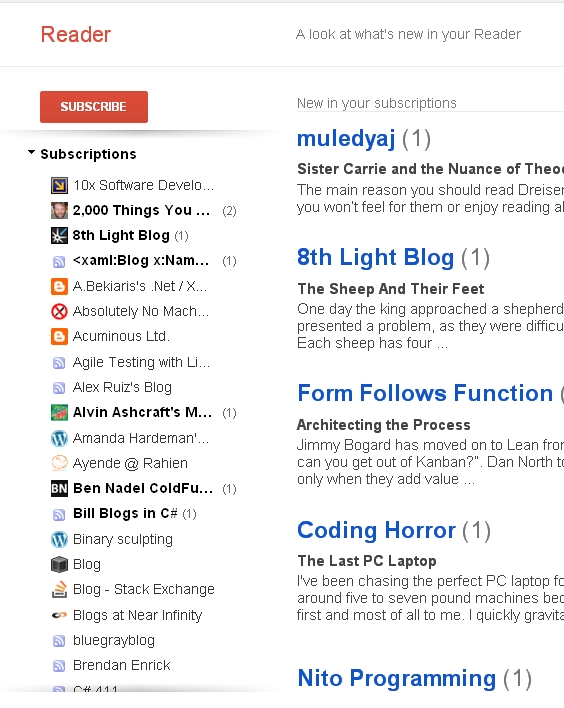 As you can see, my screen just barely fits A through C. So, I have an alphabetized list of feeds that have some parenthetical number of unread articles, and some of those articles have links to even more articles, some of which I may already have in my reader, and others that I don’t. In some of these places, some of these things are summarized, and in others, I may just have to go go with the title or the author. I think we can do better, so I propose “FeedPapyr”. Feedpaper.com was taken, so I bought the domain feedpapyr.us (see what I did there?) for 6 bucks.

What I envision is pretty simple. At its core, the site is just a feed reader. But, instead of having laundry lists of feeds, you create newspapers. You categorize the feeds into custom defined sections and the reader handles truncating them to fit into a newspaper-style layout. If the posts have images with them, those are rendered as well. They are not formatted in full post form, but rather somewhat like the view on the right in my google reader screenshot, but like a newspaper. And, when you click on an article, it “pops out” with a focused, higher z-index feel window as you read it, and retreats back when you’re done with it (there’s no need to preserve the whole “continued on page 22” thing with the actual paper). Users can “thumb through” the paper, starting with their “Top Links” and delving into other sections if they have time. They can add to the size of their papers over the course of time, promote and demote things, and swap in and out content creators. I feel that this format would lend itself particularly well to consumption of tablet or ultra book devices.

A user can create an arbitrary number of papers, just as in real life one might subscribe to multiple newspapers. I personally would love this. I’d definitely have at least one programming paper, but probably also one about Chicago sports, one about science/technology, etc. It could have ads just like normal papers to finance it, and offer a “subscribe to avoid the ads” model as well (but financing is a little far afield right now). It would basically be a newspaper that was auto-formatted for the reader with custom content that was specifically chosen and subscribed to by the reader on a case by case basis.

It’s not normally my style to go buying up domain names on a whim, but feedpapyr.us is now in my possession. If this idea is something that interests you, please get in touch with me. I’m happy to brainstorm and collaborate but if you think it’s something you’d really like to run with, I’m perfectly happy to let you have the domain name (of course, maybe you don’t like that name and would rather have your own anyway). If this is all a moot point because something like this already exists and I’m just a clueless idiot, please, please point me at it because I would love it. At the end of the day, I’d like to see this get done and I don’t have a lot of time. Sooner or later, I’m going to build myself a “feedpapyr” because I just want one. But, if someone builds one first that I can use, so much the better.

Nice — that’s almost exactly what I was looking for. I hadn’t thought of the angle of making your papers publishable (though I’d imagine that light bulb would have gone on sooner or later). It was impressive how much they figured out from my twitter account, but it wasn’t immediately obvious how to add RSS feeds as opposed to just taking the defaults. But, I found it and I’ll definitely be playing with this. I think you might have ended my search. 🙂 Thanks for the link!

I may have spoken too soon about the search being over. This is borderline deal-breaker for me unless they changed this and didn’t mention it in the thread: http://support.paper.li/entries/20156926-topic-selection-i-would-like-to-remove-the-subject-headers-ie-heath-politics-etc I know it’s a relatively small thing, but it’s going to drive me nuts. If I’m compiling a “techie” paper or a “.NET developer” paper or a “home automation” paper, I don’t want “politics” and “business” and “sports” in it. I want control over those sections and their content. I also want to be able to add more than 25 RSS feeds, which seems not to be available in either the… Read more »

A Tale of Two Web Stacks: Java vs .NET | DaedTech

[…] given my situation with the home automation project and the fact that I’m starting on FeedPaper, I’m in a unique position to document my comparative experiences with both, being in the […]