DaedTech Digest: What Do We Do about Exercise While Traveling?

Another week, another digest post.  Continuing the theme from last week, I’m back to answering people’s questions about our slow travel lifestyle.  (BTW, if you have a question about slow traveling, comment below or tweet it at me).

This week’s question is pretty straightforward.

What do you guys do about working out while you slow-travel?

Amanda and I both have regular exercise routines.  So this concern definitely applies.

Let’s start with me because my situation is simple.  I jog 2-3 miles a day, probably 5 days per week or so.  I’ve been doing this for years, and, for a number of those years, my exclusive preference has been jogging outside.

So for me, the slow travel to warmer climes actually makes things easier.  If I’m in the north during winter, and the world dumps snow on us, jogging gets complicated.  Similarly, getting demolished by a polar vortex would keep me inside.

But in the mild south?  I can just step outside and jog, no problem.  The only peculiarity that I encounter is that the US south seems not to be big on sidewalks.  But street jogging is perfectly fine.

For Amanda, life is a little more complicated.  She lifts weights at the gym, having a membership to Anytime Fitness.  So the first, best option is if one of those is nearby.  That’s often the case.

When it’s not, she joins a gym temporarily, which is difficult, since the main gym business model is to trick you into signing up, attending for a month, and never going again, but still paying.  Still, lacking an Anytime Fitness nearby, she navigates that, signing up for short term membership or else going through the cancelation hoops.

So, yeah.  Working out on the road isn’t really that big of a problem.  And, you can find yourself with a jogging path like this one I had in Ocean Beach, San Diego. 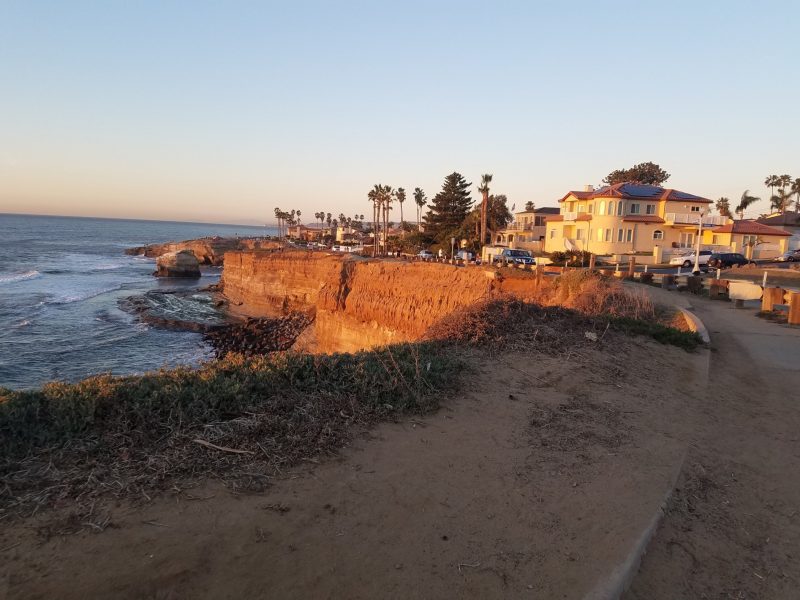 And, as always, folks, have yourselves a great weekend.

We’ve had enough problem with temporary gym memberships that I think, as of right now, we’re vowing to never ever ever ever give a gym our credit card again. Cash, and in advance only!

Yeah, it’s a real crap shoot in that industry. Amanda has been unscathed so far, but I’m waiting for some gym in some random place to keep charging us forever because you can only cancel in person, signed in blood.