My Notes from Dubai: A DaedTech Digest

I’m on vacation right now.  But here I am, bringing you content anyway.  I’m just that dedicated.

Actually, when I was younger, I was in the habit of writing trip journals of my travels.  Later, I turned these into the slow travel digests.  So, really, I’m just kind of continuing that tradition, which is actually fun for me.

I thought some of you might like to read about our most recent adventure.  And it’s kind of fun for me to write about it.

I’m in a plane at the time of writing, on my way from Dubai to Phuket, Thailand.  So, lacking anything better to do, I’ll describe our experience in Dubai.

A Sort of Accidental Trip to Dubai

Amanda and I have been itching for a vacation.  Now, given our slow travel lifestyle, I imagine a lot of folks reading think our life is sort of a perpetual vacation.  But, it isn’t.

Truth be told, we haven’t taken a full-on, “don’t check your email,” type of vacation in something like 2 and a half years.  Sure, we’ve had a few days off here and there, and we’ve gone places.  But there are always client or personnel issues to address.

Not this time, though.  This time, we planned and arranged to unplug completely, in the form of a 2 week vacation on the beach in Phuket, Thailand. 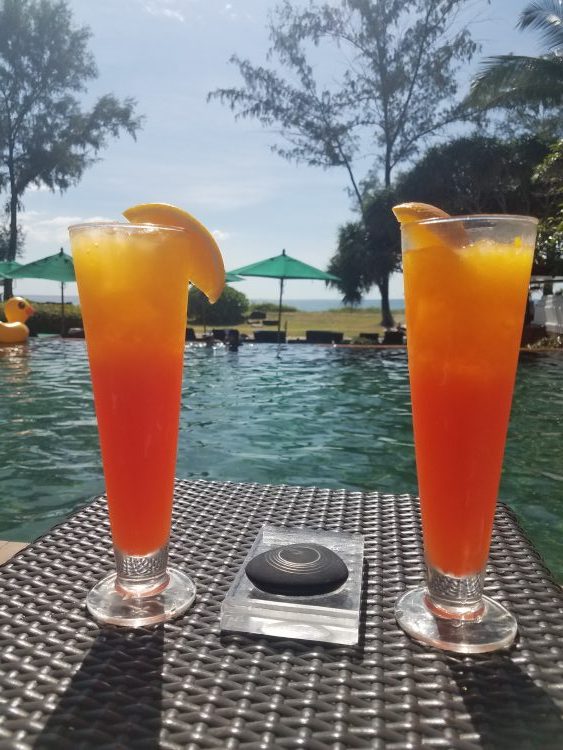 We booked a flight with Emirate Air, which had us laying over in Dubai for about 9 hours: just enough time to die of boredom in the airport.  On a whim, I asked the travel agent if she could extend our stay there to something like 2-3 days, and she said, “sure, I can do that.”

And so, just like that, we found ourselves booked for 3 nights in Dubai.

We flew in on a Thursday night, which became a Friday night.  In other words, we left O’Hare at about 9:00 PM.  And then, between the 13 and a half hour flight and picking up 9 time zones, we landed almost a day later, tired and feeling that everything was just a little surreal.

After making our way through an extremely efficient and easy customs process, we met our pre-arranged airport transport and headed out into the sweltering Dubai night.  There’s sort of a seemingly permanent haze in Dubai, but in spite of that, we were able to see a lot of the city on the half hour ride from the airport to our hotel, at a marina.

Upon arrival, the Marriott rewarded us with a pretty serious upgrade in a novel to my travel status.  We’d booked a normal hotel room, but – and I’m not making this up – they upgraded us to a room with a view of the Persian Gulf and which featured 3 bedrooms, 3.5 bathrooms, 2 balconies, and a full kitchen/dining room ensemble. We dumped our stuff and headed to the 52nd (top) floor of the hotel for a nightcap and a bite to eat, before collapsing in exhaustion after about 36 hours with almost no sleep.

The next morning we awoke, ready to experience Dubai.

We spent 3 nights and 2 days in Dubai, so bear in mind that I’m reporting an anecdotal account (supplemented by light googling) of my take on the city.

During our 2 days, we visited Old Dubai, new downtown Dubai, a couple of malls, and the Marina/Riverwalk near our hotel.  All of this combined to give me a pretty good sense of the city, I think.

As I’ve already mentioned, there’s a sort of pervasive haze that lends a slightly surreal quality to everything.  But looking past/through that, you see a city that’s beautifully and unrelentingly modern. 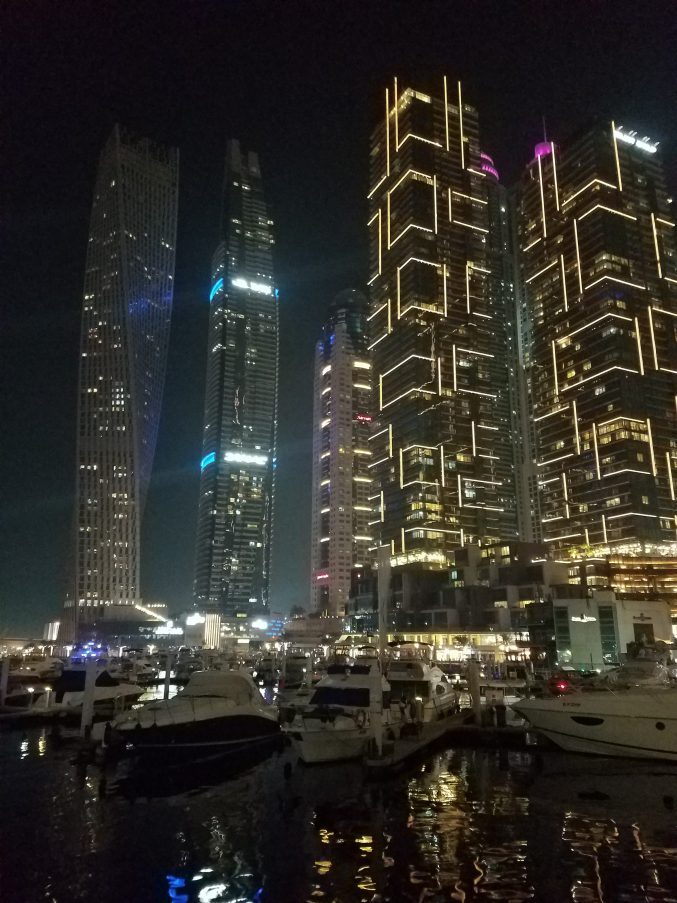 From doing a bit of Googling, we learned that Dubai is a very intentional city.

In the 90’s, apparently, leadership figured out that (1) they were rich from oil and (2) that oil would run out in the 2030’s, so they hatched a plan: use the oil money, while it flowed, to build an incredible city that would attract tourists and commerce and allow Dubai to achieve a sort of oil-escape-velocity.

The result is a city under construction everywhere, except where they’ve already constructed sleek, modern skyscrapers, immaculate in appearance and tinged blue.  The buildings are beautiful, with the city having brought in top architects from all over the world to construct works of art, including the Burj Khalifa, the tallest building in the world.

But it isn’t just height or modernity that define the vibe.

Around the Burj Khalifa is a beautiful fountain, residential skyscrapers, and restaurants, shops, and a mall as far as the eye can see, all very tastefully done.  Dubai features an indoor ski park, impressive looking car dealerships, buildings that are essentially sculptures, and any modern, aesthetically pleasing amenity you can think of. 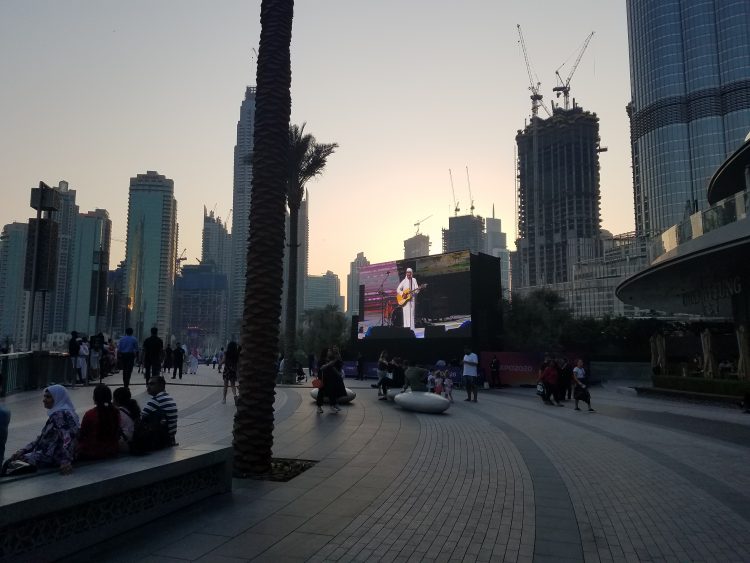 There is old Dubai, with older structures and markets.  Here we spent part of an afternoon, shopping for spices and trinkets, and just walking around.

These buildings seemed older, but even against this backdrop loomed newer skyscrapers and general trappings of a modern city superimposed over its own history.

The People and Vibe

So we’ve got a super modern city with super modern buildings, constructed intentionally to attract commerce and tourists.  Who inhabits this city? 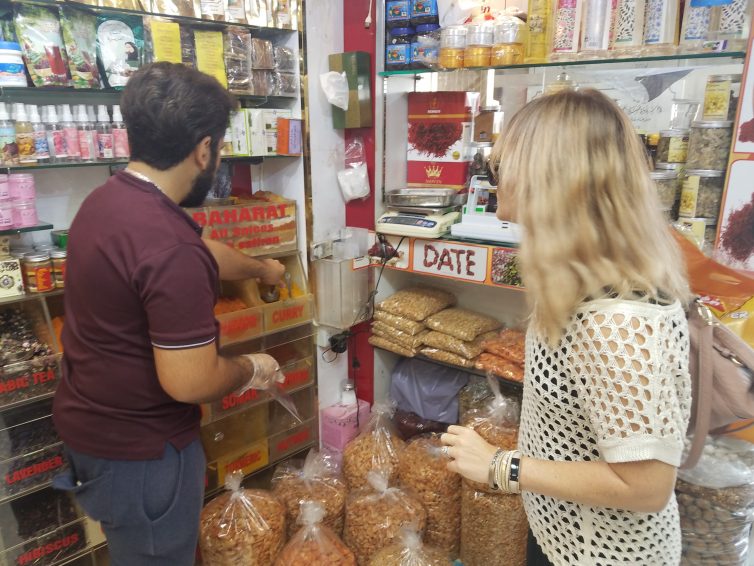 Well, like anywhere else, you might think it’d be locals, accompanied by a handful of expats and tourists.

You’d be wrong, though.  Reverse it.

You’ve got a handful of locals with a city full of expats and some tourists.  We looked this up – something like 80% of the city’s population is expats.

Before looking it up, I kind of sensed this.

Our airport transport driver was Philippino, our hotel clerk Egyptian, and the people that helped us with our bags Indian.  In the lounge the first night, we heard a lot of the Queen’s English and a bit of Spanish.

And the food/restaurant chains came from everywhere: America’s grossest, like Hardy’s, American stapes, Tim Horton’s, some British chains, and restuarants I can only assume came from all sorts of countries.  But nothing that claimed to be Emirati.

Dubai might be the most international/cosmopolitan city I’ve ever seen.  And I’ve spent time in New York, London, Vancouver, Dublin, Paris, Toronto, and Madrid, among others.

All manner of dress, language spoken, cuisine, people, etc.  And all in seeming complete harmony.

Now, I’ll grant that I spent time in the city as a tourist, so I might not have an everyman perspective.  But this extreme cosmopolitan vibe and the feeling that everyone in the city had specifically chosen to be there contributed to a feeling of utter friendliness and collegiality.

So far I’ve been gushing about the city, so let’s mix it up a little.  I’m happiest when the outdoor temperature is around 65/18 Celsius.  This made Dubai… not the happiest place on Earth for me.

It was sort of humid, unrelentingly sunny, hazy, and blisteringly hot. 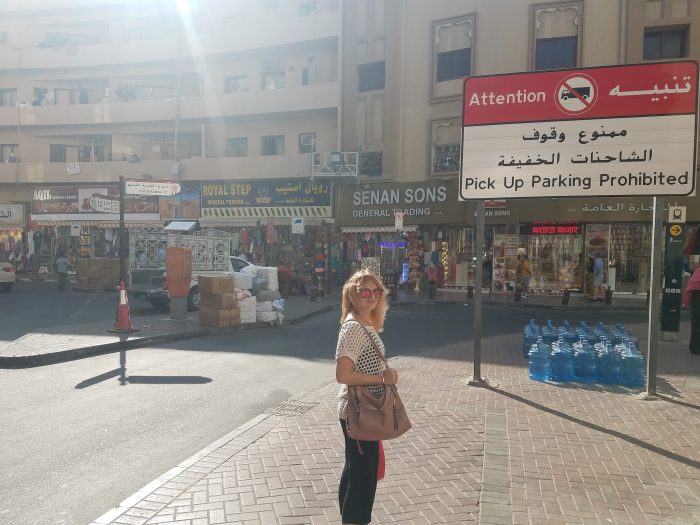 One morning, I woke up around 8 and went for a jog at maybe 8:45.  My phone’s weather app said it was about 78, meaning I had a window of a bit of comfort for jogging.  I decided to do a 4-5 mile jog, but wound up stopping at about 3.5 miles, feeling like it wouldn’t be a good idea for me to continue at anything more than a walk.

When I got home, I wondered if I was losing it, so I looked at my phone again.  In 45 minutes, it had climbed from 78 to 86, with a head index of 93, and I was jogging in the sun.  I guzzled water and sat in the air conditioning, cooling down, for about 20 minutes, recovering.

Unless you really enjoy heat, you’ll only want to go outside at night.

Having covered, perhaps, the major points of evaluating a city, I’ll close with some random observations and tidbits. 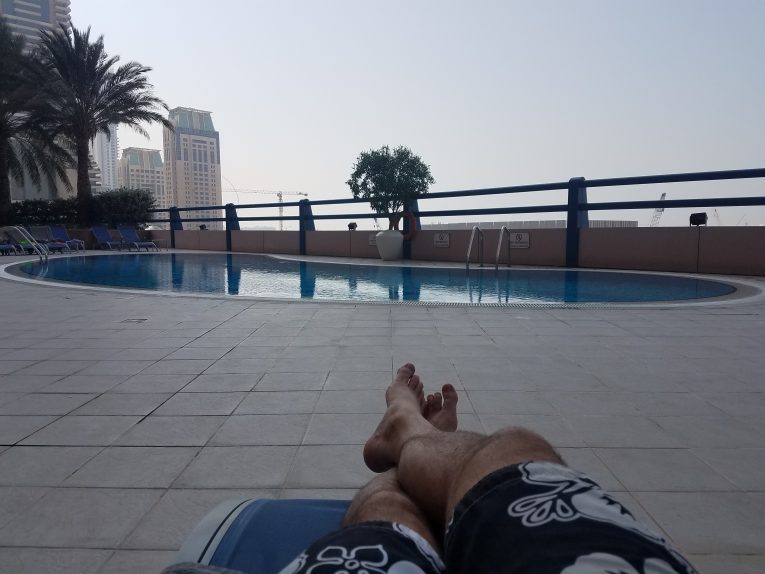 And, as always, I’ll wish you all a good weekend/week.  I’ll try to do another one of these or two about our time in Thailand, but no promises.  We’re on vacation, so anything I do, content-wise, is subject to, “meh, is this better than having a mojito and reading?”