DaedTech Digest: Our Glorious Return to the Frozen North

I am typing this from home.  Or, at least, I’m typing it from a house that we own.  We’ve always thought of it as our lake house, despite opting to make it our primary residence as far as various municipalities are concerned.

This puts in southwest Michigan, kind of in the middle of nowhere, and definitely in the woods.  And it’s nice to be back!

As I mentioned last week, our last vagabonding stop was the Florida Keys before spending a week in Raleigh to visit a client.  So the final leg of our cold season journey involved a single (long) day trip from Raleigh to here in Michigan.

That was a minor adventure.  The vent system in our Jeep is on the fritz, and it crapped out an hour or so into the trip.

Now, this might not sound like a big deal, but when you’re traveling with cats, you can’t really roll the windows down.  And, even though it was probably 40 degrees or something for you northerners, Monday in North Carolina saw highs around 90.  So we sweltered.

But, as luck would have it, the temperature dropped 50 degrees during the course of that drive, as we headed north and the sun headed west and down.  So, by the end, we were actually cold in the car, with the window cracked to prevent the windshield from fogging, rather than to keep us from dying of heat stroke.

But we made it.

We made it to a house that was more or less in good working order.  Eh, give or take a weird smell from mineral deposits in the water heater and a sagging deck by the lake there.  The place held up pretty well for a house relentlessly attacked by ice-nadoes and bomb cyclones and whatnot all winter.

So we did what anyone used to 80 degree weather, beaches, and sun for the last bunch of months would have done upon arriving in the frigid north.  We made a fire. 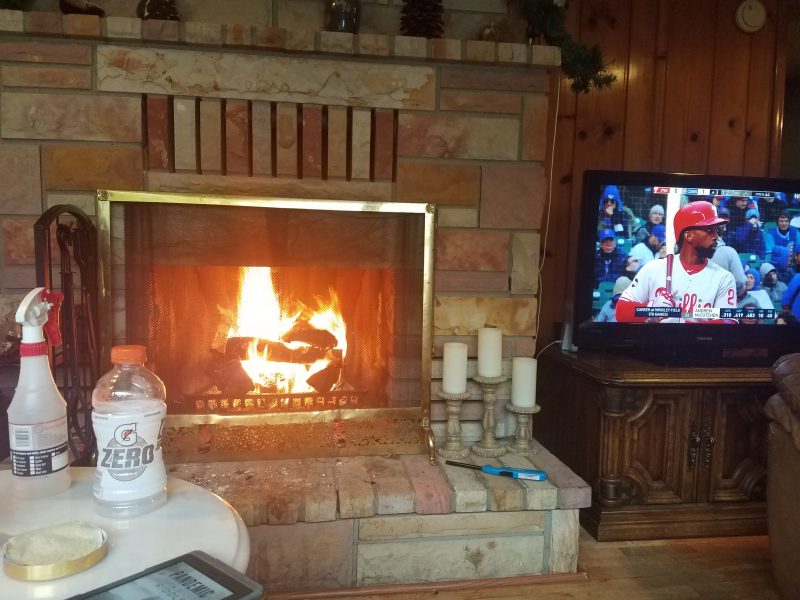 Luckily, the cold spell lasted only a day, and now I’m out jogging in the 75+ degree weather to which I am accustomed.  And, I’m doing it back home where I can take power tools to anything in the house that displeases me, rather than calling an AirBNB host to come fix it.

Now that I’m home, I plan to make good on my threats for more content.  But, since that didn’t apply to the past week, here’s another embarrassingly sparse digest.

And, as always, have yourselves a great (holiday, in the US!) weekend.

One think I like about Airbnb is that I can give the host the 3rd degree about the quality of their Wi-Fi prior to making a reservation, and then argue out of the reservation if the Wi-Fi doesn’t hold up. Can’t get that same level of confidence in hotel Wi-Fi.

And in honesty, I’ve only had to do this, arguing out of a reservation, once, after which I learned to give a better 3rd degree beforehand, and it has not been an issue since.

We actually do exactly the same thing, regarding wifi quality. We have kind of a stock message we send to all hosts before booking that more or less says, “please let us know if your wifi isn’t good because that’s our livelihood, and if it doesn’t turn out to be good, we will make it our and your biggest problem until it is good.”

Another thought regarding the mail hassles – about 80% of institutions will actually accept a document signed using the pen and screen on a tablet, in my case a Microsoft Surface. Naturally I don’t ask first – I just sign and return, either via email or HelloFax.com.

Notarize.com is also worth paying attention to, although I had one agency reject their notarizations, even though my own neck-deep research into legal statutes suggested they should have accepted (or should have been required to accept?) it.

Amanda does the sign a PDF trick as well, and we rarely have that kicked back. I’ll check out notarize.com — sounds promising.