Regions Are a Code Smell

There’s a blogger named Iris Classon that writes a series of posts called “stupid questions”, where she essentially posts a discussion-fueling question once per day. Recently, I noticed one there called “Should I Use Regions in my Code?”, and the discussion that ensued seemed to be one of whether regions were helpful in organizing code or whether they constituted a code smell.

For those of you who are not C# developers, a C# region is a preprocessor directive that the Visual Studio IDE (and probably others) uses to provide entry points for collapsing and hiding code. Eclipse lets you collapse methods, and so does VS, but VS also gives you this way of pre-defining larger segments of code to collapse as well. Here is a before and after look: 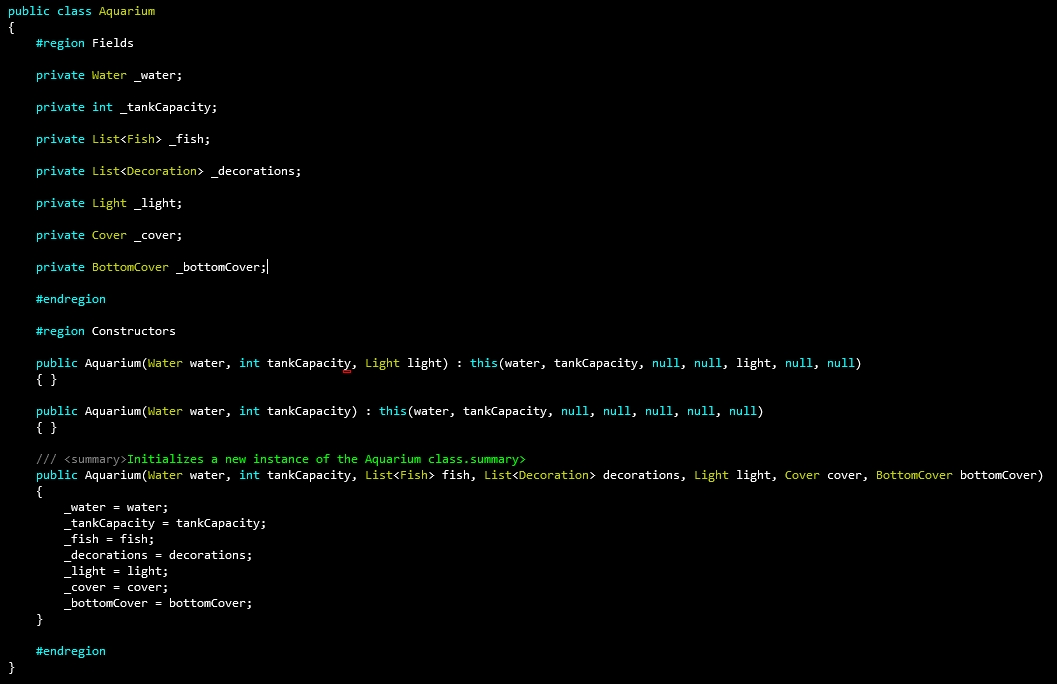 (As an aside, if you use CodeRush, it makes the regions look much nicer when not collapsed — see image at the bottom of the post)

I have an odd position on this. I’ve gotten used to the practice because it’s simply been the coding standard on most projects that I’ve worked in the last few years, and so I find myself doing habitually even when working on my own stuff. But, I definitely think they’re a code smell. Actually, let me refine that. I think regions are more of a code deodorant or code cologne. When we get up in the morning, we shower and put on deodorant and maybe cologne/perfume before going about our daily business (most do, anyway). And not to be gross or cynical, but the reason that we do this is that we kind of expect that we’re going to naturally gravitate toward stinking throughout the day and we’re engaging in some preventative medicine.

This is how I view regions in C# code, in a sense. Making them a coding standard or best practice of sorts is like teaching your children (developers, in the metaphor) that not bathing is fine, so long as they religiously wear cologne. So, in the coding world, you’re saying to developers, “Put in your regions first so that I don’t have to look at your unwieldy methods, haphazard organization and gigantic classes once you inevitably write them.” You’re absolving them of the responsibility for keeping their code clean by providing and, in fact, mandating a way to make it look clean without being clean.

So how do I justify my hypocrisy on this subject of using them even while thinking that they tend to be problematic? Well, at the heart of it lies my striving for Clean Code, following SRP, small classes, and above all, TDD. When you practice TDD, it’s pretty hard to write bloated classes with lots of overloads, long methods and unnecessary state. TDD puts natural pressure on your code to stay lean, compact and focused in much the same way that regions remove that same pressure. It isn’t unusual for me to write classes and region them and to have the regions with their carriage returns before and after account for 20% of the lines of code in my class. To go back to the hygiene metaphor, I’m like someone who showers quite often and doesn’t sweat, but still wears deodorant and/or cologne. I’m engaging in a preventative measure that’s largely pointless but does no harm.

In the end, I have no interest in railing against regions. I don’t think that people who make messes and use regions to hide them are going to stop making messes if you tell them to stop using regions. I also don’t think using regions is inherently problematic; it can be nice to be able to hide whole conceptual groups of methods that don’t interest you for the moment when looking at a class. But I definitely think it bears mentioning that from a maintainability perspective, regions do not make your 800 or 8000 line classes any less awful and smelly than they would be a in language without regions.