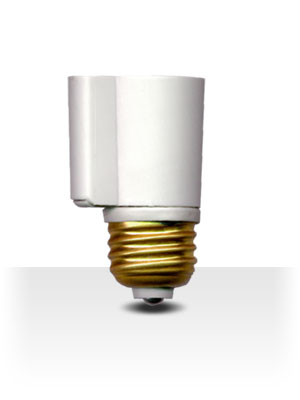 In the last post of this series, I covered adding a wall switch to a home automation network. Today, I’m going to talk about adding the “socket rocket”, or LM15A. It is commonly known as “Socket Rocket” presumably due to it fitting in a light bulb socket and I guess vaguely looking like a rocket or something. As you can probably deduce from its image, the socket rocket works by having a light bulb screwed into it and then being screwed into a normal light socket itself.

The socket rocket confers a few benefits on users. First, unlike the lamp module we covered in the first post and like the switch we covered in the most recent post, the socket rocket does not announce its working with a loud clicking sound. It turns its bulb on and off silently. Secondly, the socket rocket will work regardless of whether a lamp is controlled by the lamp’s switch, a wall switch, or both. This makes it quite versatile and extremely easy to install, requiring neither replacement of a wall switch, nor even location of the outlet into which a light is plugged. A third advantage is that a series of socket rockets on multi-light lamps allows more granular control over the lights than is possible without home automation. For example, if you had an overhead bedroom lamp with three light-bulbs, you could use socket rockets to have a setting where two of the bulbs were off and one was on. And, finally, the socket rocket can allow control over lights that are generally hard or annoying to reach. This may seem obvious, but an interesting possibility opened up here is the ability to place a lamp in some hard to reach location (up high or on a porch, for example) and control it remotely.

On the flip side, the socket rocket also has a few downsides as compared to the switch and the lamp module. Unlike these modules, it does not work in conjunction with manual operation. If you unplug or manually turn off a lamp into which a socket rocket is plugged, the socket rocket will forget what on/off state it was in and revert to off. So, socket rocket should only be used in lamps that will exclusively be controlled by the home automation network. Secondly, the socket rocket does not allow dimming nor does it respond to dimming commands (though this does allow for the not-officially-approved but interesting ability to use socket rocket with CFL bulbs). And, third, the socket rocket is not programmable with the manual dials that I’ve discussed before — I will cover how to program them below.

Setting up the Socket Rocket

So, assuming that you’ve read through the pros and cons and decided that you have use for a socket rocket, let’s buy one and set it up. For this and other home automation needs, I usually search ebay for sales home automation stores. At the time of writing, socket rockets typically run around $20, though I have seen them for as little as $10 at times. Personally, I tend to buy them from ebay stores — people who sell X10 equipment as part of a commercial business. This generally ensures smooth, easy transactions and properly working devices. However, you can probably get them cheapest if you buy them used from other non-store ebay users. My preference may not be the same as yours.

Plug the socket rocket into your lamp and the bulb into the socket rocket. Make sure your lamp is turned OFF, and plug it into the same wall outlet as your transceiver module. You can plug it in wherever you have the transceiver module set up already, or you can move them both to some spare outlet pair. This is all just temporary for the setting of the house and unit code. Now, decide which house code (letter) or unit code (1 or 9) you want the socket rocket lamp on. It defaults to A1, so let’s choose A9 to make sure we’re programming it correctly. Once the lamp and transceiver are both plugged in, turn the lamp on (the bulb will not light) and, within thirty seconds, click the right “on” on the remote three times. The socket rocket bulb should light up, which tells you that it has been properly programmed.

The theory behind the scenes is that whenever the socket rocket first receives power, it goes into “programming mode” and sets itself to any house and unit code combination it receives an on signal for three times. So, plugging it in and hitting “on” from the remote corresponding to A9 three times tells the socket rocket that you want to program it for A9. From here forward, the socket rocket will respond to A9 when you click it on or off.

As I mentioned briefly earlier, the socket rocket should only be controlled from your keychain. If you unplug the lamp or turn it off manually with the switch, when you turn it back on, the socket rocket will not remember that it was on last time, and you’ll have to turn it on again. So, let’s say that you plug the socket rocket into a light in your closet operated by a pull cord and turn it on with your keychain. If you turn it off by pulling the pull cord instead of with the remote, you will not be able to turn the lamp back on with your remote. And, when you go to turn it back on by pulling the cord, it will not illuminate because the socket rocket has forgotten that you wanted it on (it will briefly illuminate to show you it has power and then turn off). You will have to pull the cord and then turn it on with the key chain. Because of how confusing this is, I strongly recommend using the socket rocket only on a light that you never turn on or off any other way.

When bulbs burn out, you can replace them by screwing them into and out of the socket rocket while leaving it in place. There is no need to do anything with it at that time. If you want to reprogram it, simply repeat the original programming process but with a different house and/or unit code.

Thanks, and glad if the post helped! Also, thanks for the link — I’ll give it a look. Not sure if I’d get good returns or if shipping overseas is available, but worth a try.

No problem Erik, happy to return a helpful link for those reading this in the UK 🙂

I agree it might not be the best site for shipping outside the UK (not even sure if they do?), but your post came up in the UK on google so I’m sure others in the UK will read, and the link should be helpful to them 🙂