Easy Deployment: the Alpha and the Omega

A bit of housekeeping…you may have noticed that the social media buttons look a bit different if you’re not accessing through RSS. The old plugin that I was using seems not to be supported anymore, and the Facebook button vanished for a bit. I tried out a replacement and liked it, so I kept it. My thanks to Active Bits for the Social Sharing Toolkit.

There’s a pretty good chance that your deployment process is both too painful and not painful enough. But before I return to that cryptic statement, let me talk a bit about something I’ve observed in developers — especially ones that are newer to the industry. Here’s an example of a series of exchanges that has become pretty familiar to me:

User: It would be nice if the profile screen had a way I could change my password.

Young Buck: Okay, I pushed it out to the server, so you can change your password now.

User: Wow! It’s live already? That’s really cool! Thank you! Let me try it out. Let’s see… oh, hmmm. When I try to log in it looks like it crashes.

Young Buck: That doesn’t seem right. I mean, the only thing I changed was…. oh! I know exactly what happened. Give me three minutes, and I’ll be back.

Young Buck: Alright, should be good.

User: Well, I can get in again, and there’s the change password button, but when I click, nothing happens.

Young Buck: That’s not possible. You must have forgotten to clear your cache. Unless…wait, I think I know what’s going on here. Give me 10 minutes.

User: Uh, tell ya what — just don’t worry about it. Maybe I’ll try it again next week.

Young Buck: (Crestfallen) But it’ll only take 10 minutes and I know exactly what the problem is.

User: (With pity) I’m sure you do, but I’ve got a lot of things to get done today.

This is not professional behavior. Imagine if you took your car in for repairs somewhere and things went this way. You’d probably have the Better Business Bureau on the phone shortly or at least be headed to another mechanic. The young buck is sloppy because he’s brash and arrogant. Right?

Or does it just come off that way a little because of how sure he seems when really he’s just eager to please the user and prove himself? Personally, I find that in the overwhelming majority of cases this is really what’s going on. People often get into programming because they like solving problems. And many programmers were some of the smartest kids in their classes growing up — the ones waving their hands frantically, demanding that the teacher give them a chance to show that they know the answer. 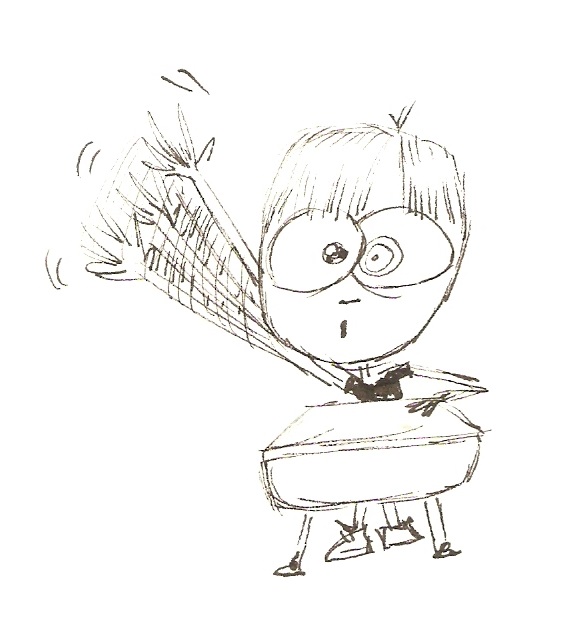 As entry level programmers, the school game has been all that they know. It’s a balance between rushing to get the right answer (teacher calling on students, timed exams, cramming in homework, etc.) and getting answers right, with the former often winning. In college, most programming assignments are evaluated by programs that allow you to submit your code as often as you want and get immediate feedback. There are also office hours, so students who visit professors and TAs the most frequently and submit the most work tend to get the best grades and the most feedback. Computer Science students are used to a paradigm where ideas are valued over execution.

Welcome to the Real World, Grasshopper

In the professional world, however, execution reigns supreme. Ideas are cheap. You may be able to rattle off the quick-sort algorithm in pseudo-code faster than anyone around you, but that’s not going to win you any startup capital. With software, even the intellectual property system (USPTO, anyway) is a joke seemingly designed to let Apple, Microsoft and Google endlessly sue each other and occasionally to swat little guys like bugs. Having the idea first and/or quickly is not as important as getting the idea right in the end.

It takes people some time to learn this upon entering the work force, and exchanges like the one I mention above are common. Users more or less say, “Go away and come back to me when you have something that makes my life better and not a second before. I don’t care if you thought of it in five seconds or if it took you five minutes or if it would have taken you five minutes except that the database was actually not normalized to BCNF and blah, blah, blah. Whatever.” Some people figure this out quickly, and some never figure it out. But whatever the speed may be and however much your group may or may not have come to terms with this, there needs to be structure in place to stop the madness.

Deployment is not to be taken lightly, especially if there is a release and the users are going to be seeing the result of the work. If you can deploy effortlessly in minutes, there’s a very good chance your process is not painful enough. The situation I’ve been describing above suffers from this very problem — it’s too easy for eager crowd-pleasers to deploy and thus it’s too easy for them to depend on users to be their fast feedback mechanism.

Developers are smart and often opportunistic. Getting fast feedback is extremely important to them, and they’ll naturally seek out ways to procure it. If you let them, they’ll use end users as their feedback mechanism (and, in a tone-deaf sense that ignores end-user perception, this is actually optimal), but you can’t permit this. Rather than following that path of least resistance, or at least familiarity from school/hobbyist days, you need to choke off that path and force them to carve a new riverbed. You need to make deployment more painful.

Now there’s “antiseptic on a cut” painful and “shark gnawing on your leg” painful. You want to gun for the former. A lot of deployment processes that enable developers to SPAM end users with non-functional updates are the product of amateur hour: xcopying files to the server, putting an executable on a share drive, zipping things up and emailing them, etc. These things tend to be both easy to do and easy to botch, so simply setting policies in place that prevent developers from doing them is antiseptic on the cut.

Deployments and especially releases to end users need to follow some process, and coding is simply one stop along the way — not the entirety of it. Ideally, there should be the coding and then developer testing, but from there, automated unit and integration tests, code reviews, static analysis, exploratory/manual testing by QA and observation by a UX group can all be part of the mix. These good practices serve to improve quality in and of themselves, but they also serve to prevent spurious, sloppy releases. If you know you can make a change in five minutes and have it in front of a user in six minutes, you’re going to do that. But if you know that you can make the change in five minutes and it’ll be days of going through the entire release process before you hear back from the end user, you’ll start finding other ways to get fast feedback (such as running unit tests, asking other developers to take a look and working closely with QA). By making deployment more painful you ensure that a lot more care goes into it.

But Hurts Too Much

If you’ve been reading along and grinding your teeth in objection to my premise that your deployment process needs to hurt more, I understand. Things shouldn’t be painful, and deliberately hurting yourself is a form of madness. If your deployment process hurts, it’s too painful, even though I just told you it’s not painful enough. But you have to prevent pain in the right way. Xcopy deployment is like being a boxer addicted to morphine — your process is horrible but pain free. Now imagine that you realize that being addicted to drugs is a problem, so you cut back and start feeling the pain each time a professional puncher unloads on you. In one sense, you’re feeling too much pain because it hurts to get punched in the face, but at the same time you’re not feeling enough pain because the amount you’re feeling isn’t causing you to consider another vocation.

The analogy here may not line up exactly, but the idea is similar. A lot of development and deployment processes are problematically painful in that they’re error-prone and difficult, but not painful enough in that they don’t prevent over-eager deploys and bad decisions. The solution? Get off the junk and stop letting yourself get pummeled by human wrecking balls. Or, in software terms, have a process that makes bad deployments hard and good ones very easy.

Now, getting to this release nirvana is not, itself, simple, but life is simple once you get there. The path to it generally involves a lot of automated testing and good planning. It involves a predictable release cadence, such as a sprint, and a commitment to following the process, not making exceptions nor cramming things in at the 11th hour or pushing back release dates. It involves continuous integration rather than periodic, nightmarish feature branch integrations. It involves a resistance to patching frantically when you make mistakes (you’ll learn a valuable lesson for next time). It involves a simple, fully-automated, easily repeatable build process. It involves a single click/button push deployment process. Summed up, it means that every time someone on your team checks in code, a series of automated tests and checks ensure that the code would be a good candidate for production or it is rejected from checkin until it would be. It means that your code could be shipped with a reasonably high degree of confidence on every checkin and that whether or not to actually ship is a business decision — not a technical one.

I encourage you to take a look at your build process and deployment process. Is it easy because Jim in accounting could do it? If so, it’s too easy and it’s definitely causing you problems. Is it hard enough that you do a lot of checking beforehand because you won’t want to do it again if things go wrong? That’s an improvement because it forces your hand for early testing and vetting, but it’s still a time-wasting problem. First, think about putting obstacles in place to guard against careless deployment, then think about refining those obstacles into process-helping practices, and finally, think about smoothing over the obstacles in the form of complete automation, leaving nothing but good, easy process.