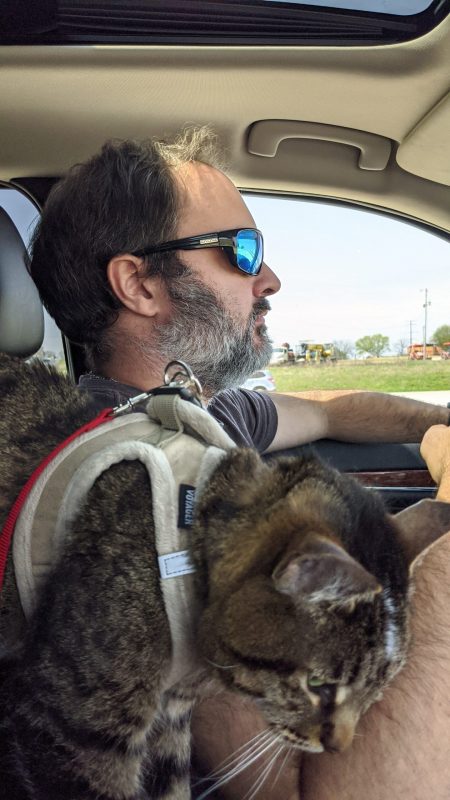 Alright, let’s get this out of the way, since I know people will be curious, given the timeline of our departure and stay in Spearfish.

I have such intense fatigue on this subject that I’ve taken to snoozing/muting everyone/everything I see in my feeds that contains the words “covid,” “mask,” etc.  So if you’re hoping for a discussion or debate about this topic… anywhere, I have a heaping helping of disappointment headed your way.

Spearfish is in a county called Lawrence County that went almost completely unaffected by the pandemic (something like a dozen cases, 0 deaths for the county when we were there).  It also has an incredibly low population density.

When we went there, around May 10th, most stores, restaurants, bars, gyms, and barber shops were open for business.  There was never any statewide shutdown order in South Dakota, but a majority of places had opted to close for a few weeks of their own accord.

And we arrived at the tail end of that, where everything was either open or would open shortly after we arrived. 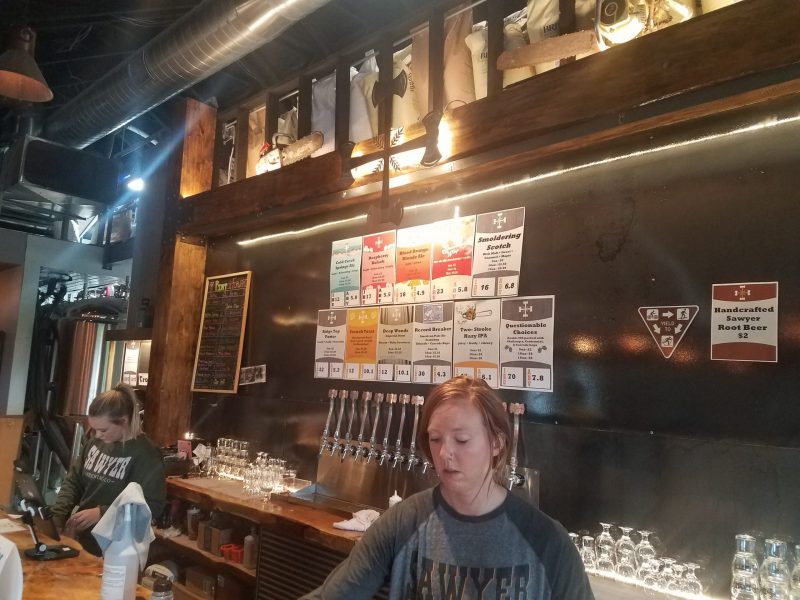 If you’re ever in the area, Spearfish Brewing is delicious, and it has a beer garden that overlooks a stream and the Black Hills.

In Spearfish, you’d think you’d accidentally time-traveled back to 2019.  The only visible signs of COVID were that employees in large chains would sometimes wear masks (and occasionally even properly), and some restaurants had spaced their tables out a bit.

Beyond that, you really didn’t see or hear much about it, and it was easy, day-to-day, not to really think about it, assuming you didn’t open social media.  I was even surprised on a couple of occasions to find someone I met shaking my hand — a tradition that I thought had died a sudden, unceremonious death months ago.

I mention this mainly because we’ve now moved around enough to see the gamut on how local places react to the pandemic, and I think folks at opposite ends of the spectrum of local COVID reactions might find it morbidly fascinating to hear about how it goes at the other extreme.  For us, part of the nomad experience is, in all the things, “when in Rome.”

Spearfish itself is sort of interesting demographically.

We stayed in an upscale neighborhood at the top of a large hill, where the houses were beautiful and where, I was surprised to learn, a fairly aggressive HOA ran a tight ship with the locals.  The folks living there were affluent and outdoorsy, with evidence everywhere of ATV-ing, skiing, hiking, riflery/hunting, biking, and any other outdoor sports you can dream up.

South Dakota is a ruby-red state, and a lot of the locals wore those politics on their sleeves.  You had some biker spillover from Sturgis and a biker bar or two in town, but I’d say it was more common to encounter small town, rural-America folks.  But Spearfish also had a small college that I think created an infusion of crunchier, artsy types and young people. 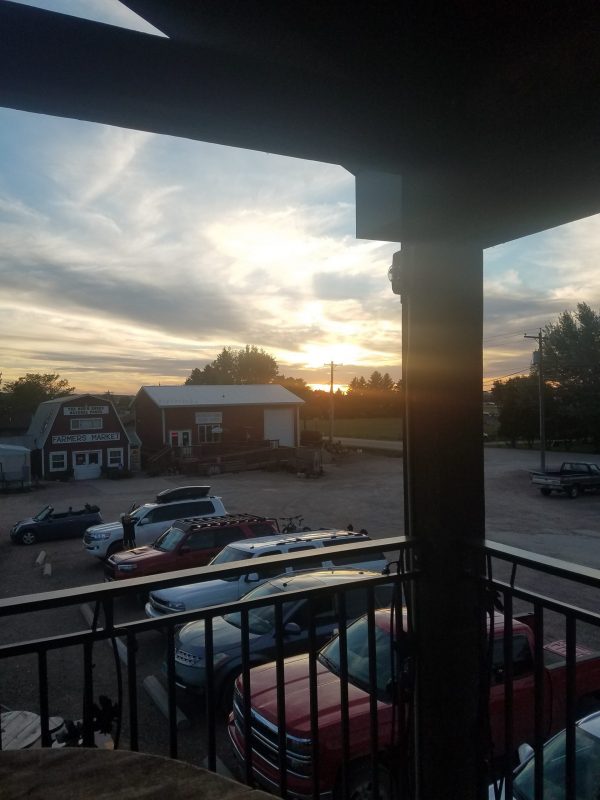 On the whole, I came to think of Spearfish and the surrounding towns as having a “frontier outdoorsman” vibe.

For such a small town, Spearfish had a surprisingly large variety of food.  After being holed up in a tiny town in Michigan for a couple of months with my carry-in options reduced to “pizza or gas station chicken,” it was a refreshing change.

If there was a specific, local flavor, I never discovered it.  We ate at a place called Cheyenne Crossing with excellent food, a fun vibe, and incredible views.  That struck me as the most “Black-Hills-y” place that we ate, but I couldn’t really put my finger on a specific cuisine.

That said, there were definitely some common foods for the local area.  With so many streams running through the Black Hills, there’s a huge trout population (that’s apparently non-native) and we definitely had some of that.  And there’s also bison meat absolutely everywhere.  I helped myself to a lot of that, loading up on bison burgers, steaks, sausages, and lunchmeat. 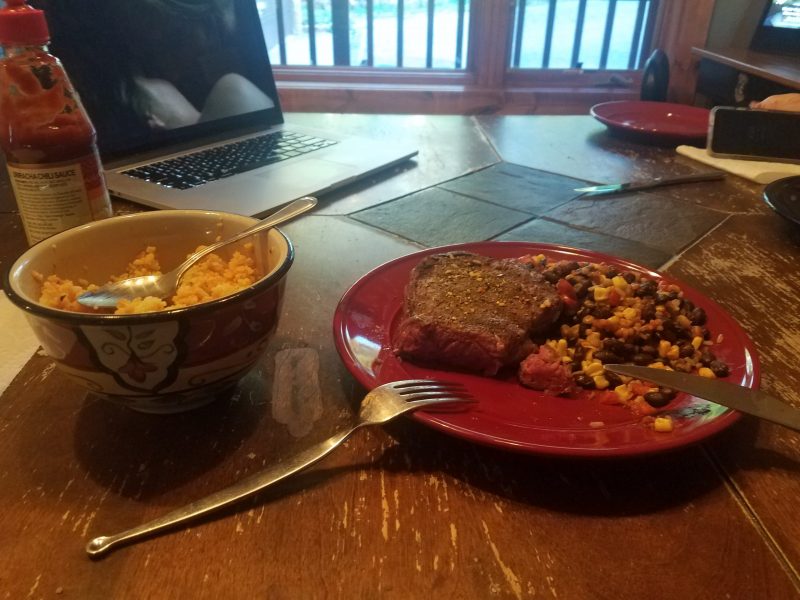 On the beverage front, I didn’t find any local wines to write home about.  Spearfish did, however, have 3 breweries in town and we enjoyed all of them.  When we were in Rapid City, we stopped at a brewery there and enjoyed it as well.  Craft beer afficianados, you won’t be disappointed if you visit the Black Hills.

We spent most of our leisure time outdoors, weather permitting.  We, of course, walked (and jogged) around downtown Spearfish and patronized local establishments.  But we focused much more on outdoors activities.

Spearfish Canyon is an absolutely beautiful area.  In fact, Frank Lloyd Wright apparently threw some shade at the Grand Canyon by saying, and I believe this is a direct quote, “it ain’t got nothing on Spearfish Canyon.”  We logged quite a lot of hiking miles in Spearfish Canyon, including this trip to the Devil’s Bathtub where you can ride a friggin’ waterfall like a waterslide. 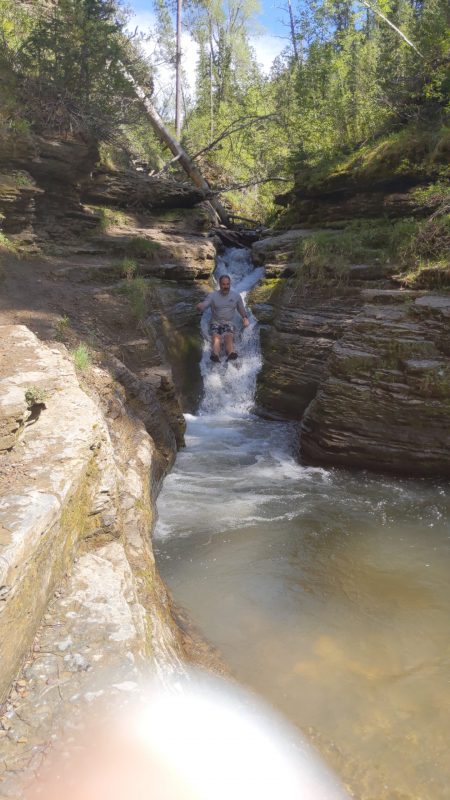 Our travels took us ranging pretty far out.  We explored Needles Highway and Custer State Park, where we did a lot of hiking and wildlife viewing.  We also visited a drive through wildlife safari where we saw plenty of wildlife (more on this later).  And we even played a little frisbee golf, which you could do right by our place.

On the urban front, we spent a day each in Deadwood and Rapid City, both of which were a pleasant mix of scenic and entertaining.  Deadwood is a big gambling Mecca, which isn’t really our thing, but it’s kind of a fun novelty town and we found a nice spot for a wine tasting.  Rapid City is a fun place as well, with both a cosmopolitan set of storefronts and restaurants, but also hiking and mountain biking right in the city proper.

And, we often didn’t need to leave the house to have fun.  We had a pool table in the downstairs, a beautiful new grill, and a firepit on the back deck.  We spent a number of evenings just enjoying that setup. 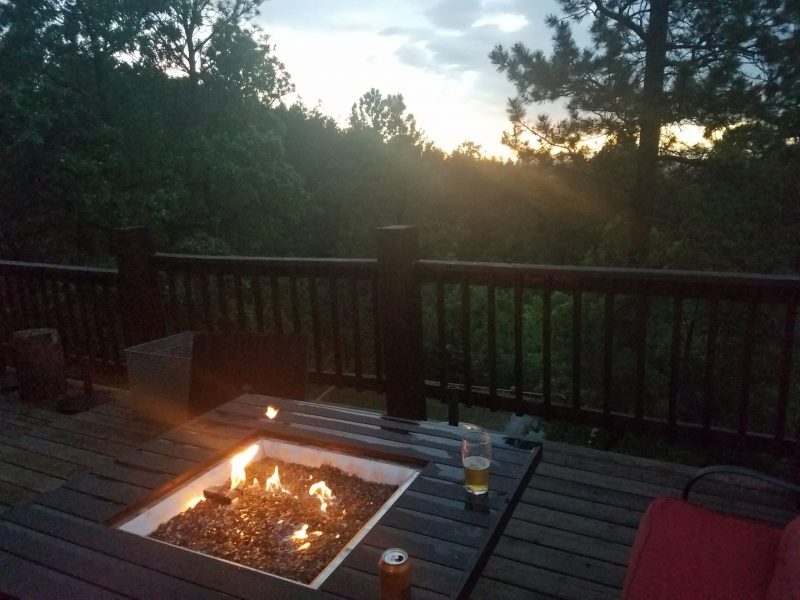 It’s hard to do the Black Hills justice.  In looking around, driving, navigating, and hiking them, it occurs to me that they’re just small mountains more than hills.  The name, apparently, comes from the appearance created the tress that cover them.

The varied, hilly/mountainous countryside makes for some generally spectacular views, wherever you are.  It also makes for the extremely low population density that I mentioned earlier, with large properties and wide open spaces.  Here’s a picture that illustrates how it’s kind of classic piney mountain terrain. 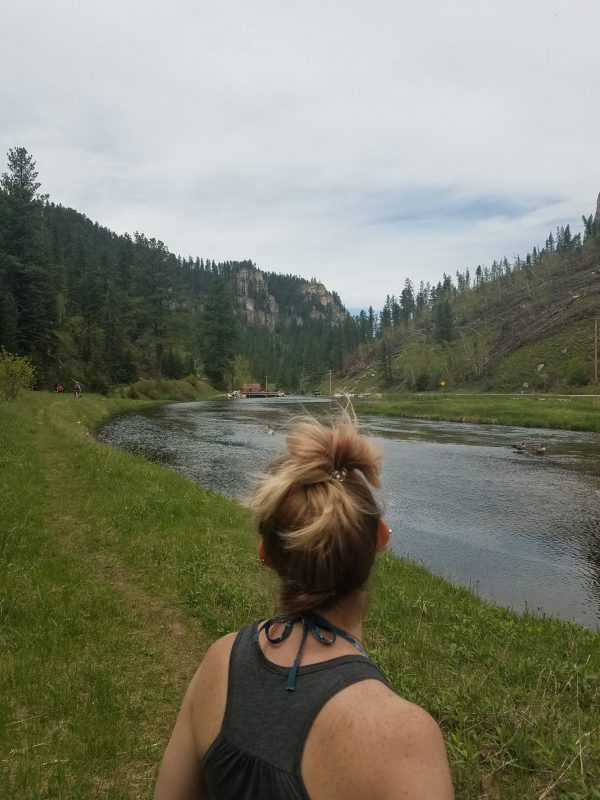 Looking out during a hike through Spearfish Canyon

Base elevation is also at about a mile, so you’re really up there.  This tends to produce tempestuous weather, including large hail that routinely cracks windows and causes damage (we witnessed this firsthand during our say).  So, think of Florida’s “move-in-fast-move-out-fast” storms, but imagine it happening above mountains and sometimes depositing hail on you.

And, finally, the wildlife.  As I mentioned, there are plenty of bison, wild and domesticated.  We saw some in person during our time in Custer State Park, though we made a point to keep our distance.

There are also black bears in the area, including this guy, pictured below.  We didn’t actually see any in the wild, per se, but we did get some nice shots during our tour through the drive-through safari park.  That park also featured gray wolves, reindeer, antelope, and foxes. 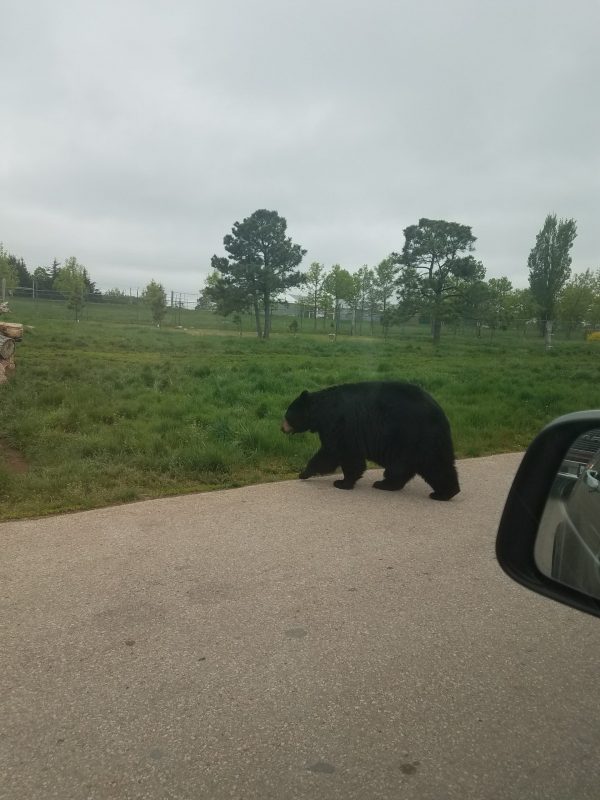 We didn’t need to go anywhere, really, to encounter cool wildlife.  Every day in the yard behind our house, we would see deer, including a number of young bucks.  And, sometimes, wild turkeys would come by and make an absolute, gobbling ruckus, which would prompt us to laugh pretty hard while sitting out back.  We even saw a baby fox one night, while driving home.

In terms of flying things, there were magpies everywhere, and some super colorful bird called a Western Tanager.  On the less fun front, paper wasps absolutely love the wood that the houses in the area are built out of; I must have hosed 10 or 11 of the things trying to build nests.

And, if you’re one for fishing, there are plenty of river fish.  We saw people both traditionally fishing as well as fly fishing.  We even visited a hatchery right in Spearfish’s downtown area.

The local wildlife did not disappoint.

Finally, here’s my most recent video.  I forgot to make a specific post about it, so I’m throwing it here.