Who Accepts Your Team’s Academy Awards?

I was listening to the Smart Passive Income podcast the other night. Yeah, I wasn’t kidding. I’m really trying to figure out how to do this stuff. Anyway, it was an episode with “User Stories” in the title, so I was intrigued. What I actually thought to myself was, “I’m a lot more inclined to hear stories about passive income than about Scrum, but this could be interesting!” And, it actually was interesting. I mean that earnestly. The episode was about Pat commissioning an IOS app for his podcast, so anyone making a living in our industry would be somewhat intrigued.

The episode started, and I listened. Admittedly, beyond Pat, I don’t exactly know who the players are, but I can tell you what I inferred as I was jogging (I frequently listen to podcasts when I jog). The interview started, and Pat was talking to someone that seemed to have a project-manager-y role. Pat asked about the app, and the guest talked about communication, interactions, and the concepts of “user story” and “product backlog.” He didn’t actually label this process Scrum until much, much later in the interview, and I get that – he’s talking to a huge audience of potential clients, so it’s a lot more compelling to describe Scrum as if it were something he thought of than it is to say, “oh yeah, we do Scrum – go google it!” 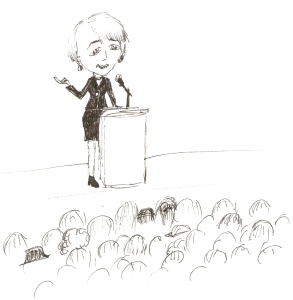 I don’t begrudge him that in the slightest. It’s a savvy approach. But it did strike me as interesting that this conversation about an app started with and centered around communication and planning. The technical decisions, data, and general nuts and bolts were all saved for later, delegated to a programmer underling, and framed as details that were definitely less relevant. In the development of this app, the important thing was the project manager, who he talked to, and when he talked to them. The development of the app was a distant second.

That set my mind to wandering a bit, and I thought of how listening to this project manager reminded me, as it always does, of the Academy Awards. Now, fair warning, I probably haven’t watched the Academy Awards in more than a decade – I don’t find it especially interesting to tune into one of the 8 programs per year where actors congratulate themselves – but I think I recall what it was like. Last time I watched, there was sort of a formula to the acceptance speeches.  A quick google search finds analysis to bear this out.  And this formula is repeated in a lot of places.

One such place is in the corporate world.  There are frequently motivational talks or company-wide email blasts where announcement and celebration have occasion to mix, awkwardly, and people tend to mimic the familiar in these situations.  Some line of very subconscious thought goes, “let me unwittingly synthesize the sum total of my experience accepting an individual award for a group effort while trying to make grandstanding sound humble.”  And, to be fair, that’s actually a pretty tough task.  So, it usually goes something like this:

I’ve been humbled over the past four months to work with the Tiger Team. It’s been an incredible journey, and I couldn’t be more thankful to the awesome people that have made this project a success. As of yesterday, we shipped Frosted Flakes to production, and I’ve been in close contact with key customer reps in all 8 geographic regions, and I’m pleased to report we’ve had zero reported issues, thus far. Obviously, it won’t always be perfect in prod, but it has been on the most critical day of its life, thanks to the Tigers.  I couldn’t be more proud.

I’d like to ask everyone to take a moment to thank the members of the team. Alice was instrumental in figuring out all of the database issues. Bob was a rock star at translating customer feedback into features and stories. Charlie knocked the user experience stuff out of the park, and Deb was the glue that held the whole thing together.  Anyway, there are probably people that I’m forgetting, but we’ve got a lot of work to do still, so just know that everyone was huge on this.

This bit of humble theater mixed with relatively earnest gratitude is rich with office realpolitik nuance.  If it were possible to peel away the layers and have this be plain, honest speech, it would probably read something like this:

Let me start by saying that I’m a boss, as evidenced by the fact that I can speak for the team and not worry about being contradicted.  Shipping Frosted Flakes was a huge win for the company, and, as the boss that speaks for the team, I want it to be clear that I was the visionary behind this.  Once that’s clear, I’ll share some credit, as I feel appropriate.

Of course, I want you all to attribute this win primarily to me, but I also like the idea of seeming humble.  So, I’ll start off by thanking the team.  That makes it clear that credit is mine to dole out, but that, like any generous lord of the manor, I dole it out freely and with an “aw shucks.”  I’ll talk about all of our collective efforts but then digress into a story about my importance, before bringing it home with the pride I take in my team, like a little league coach whose lil’ sluggers are all Hall of Famers no matter what their record may be.

Then I’ll dole out credit to some of the little people.  This serves three main purposes: a shout out to my favorite peeps, a backhanded swipe at my non-favorite peeps, and a reminder that I’m too important to remember every team member in an email to the company.

Anyway, I’m sure you already knew about the launch, but I felt it was important that I control the messaging.

Now, that makes anyone with this message sound horrible.  But they’re not horrible people.  They’re mostly just aping standard gratitude tropes that have become hollow by repetition.  After all, announcing one’s own successes and accepting credit for things are intrinsically awkward activities where seeming fake is a lot more likely than seeming genuine.

So, I’d put less emphasis on the contents of this boilerplate announcement than the person making it.  That will say interesting things about your organization.  If it’s a C*O or high level boss, it doesn’t say much one way or the other.  Announcements like this are sort of obligatory and that’s as good a person as any to make them.  If anything, it means that you probably have a relatively hierarchical org chart or a small organization with more baked in formalism.

If a line or middle manager is behind this and the person isn’t otherwise insufferable, that might actually be a good thing.  Sure, it’s an intrinsically awkward thing to do and it’s almost impossible to phrase this kind of thing well.  But in this case, you have a person using a position of influence in the company to advocate on behalf of people for whom it’d be a lot more awkward to advocate on behalf of themselves.  This is probably a person trying to provide recognition for people she feels deserve that recognition.

If the person accepting the award is an architect or “tech lead,” that’s a little iffy.  These are roles that don’t have org chart authority, which means that there’s some posturing and gamesmanship afoot.  You’d expect an announcement like this from someone with org chart authority, so one is left to wonder whether management delegated this task or whether the person with the seniority-indicating title is just faking it until he makes it.  Organizations where the messaging revolves around posturing can be unstable.

And finally, if the award accepter is a project manager or something similar, yikes.  At least with the architect/tech lead controlling the messaging, it’s a techie or former techie that’s speaking to the technical work product.  In this case, it’s a person whose responsibilities orient around status reporting and project planning, rather than delivery.  It’s overhead personnel, but overhead personnel without organizational authority.  This induces the same cringing that I experienced while listening to the podcast — the org feels the developers need a translator to human-speak.  It’s also indicative of relative bedlam when it comes to writing the story for posterity.  Neither org chart authority nor technical understanding is necessary to tell the tale of planning and shipping software.  As I said, yikes.

But I think this thought exercise can be headed off at the pass.  If you’re going to communicate a success on behalf of a team, whatever your role, don’t use a template by which largely famous, self-absorbed people try to seem humble.  You’ll just seem self-absorbed without the famous.  Instead, be honest, genuine, and to the point, expressing the team’s value to the company and treating the team as an indivisible unit.  Emphasize that they have stories worth telling and recognize that management’s role is overhead and enablement, and not delivery.  Something like:

The Tiger Team shipped Frosted Flakes today, and the customer loved it.  Initrode owes each team member a debt of gratitude for the commitment, vision and hard work that were necessary to make this such a success.  Please thank them the next time you see them and pick their brains for ideas to make other projects similar successes.