When To Pull the Fire Alarm and Run out of the Building?

How about that for a blog post title?  Of course, I can’t claim credit for it.  It’s reader question Tuesday and it was actually the reader who phased it this way.

I made a mistake.

Took on some side work that I thought would be a simple way to make money but it turned out to be a mess. I have stayed up nights and worked weekends to get it out the door but it is a failure.

I knew it would be from the beginning and stated my concerns to the team and project manager but they did not listen. Even though I should have stopped working on it at that point, I tried to power through it.

Now the project has truly blown up for all the reasons I said it would. And now I am extremely tired and have to catch up on all of the other work I neglected. I guess I was not assertive enough and should have set boundaries. I was supposed to work 20 hours per week but management did not tell the team that so they were confused when I would say the customizations they wanted would break the budget.

My business partner told me to be more assertive but I guess pride made me think I could pull it off. When do you pull the fire alarm and run out of the building?

When Do You Run out of the Building? 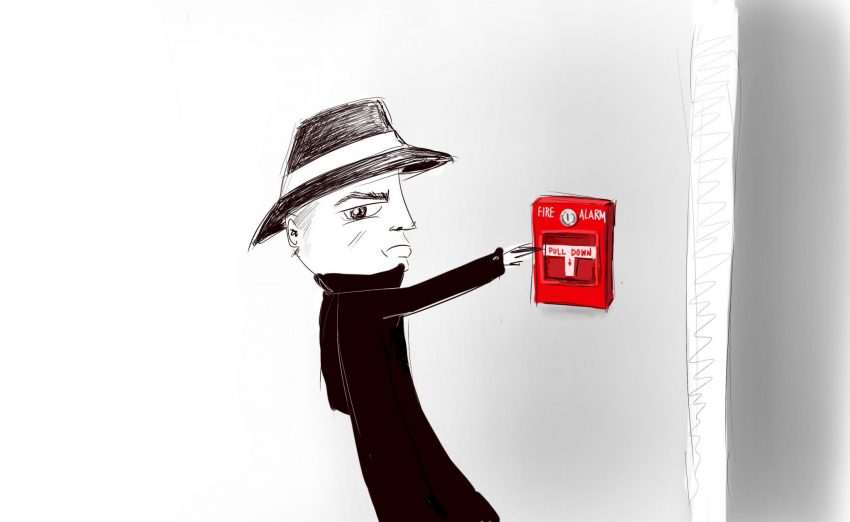 Let’s dive in and answer the question as quickly as possible.  When should you pull the fire alarm and run out of the building, presumably never to return?

Professionally speaking, this won’t ever go well, and it will burn bridges.  By “pulling the fire alarm,” I’m assuming that you’re referring to a relatively perfunctory bit of notice and a quitting of the project.  Doing that on a contract, especially one going poorly, will strain and break professional relationships.

That said, if we’re talking about personal sanity or burn-out, you’ve got to do what you’ve got to do.  Side work shouldn’t ever threaten your mail line of work, let alone something like your health.  So understand that when I say not to pull the rip cord, I’m speaking strictly from a professional perspective.

If Not Pulling the Fire Alarm, Then How to Get Out of It?

When I do work for clients or even have sales discussions with prospects, I tend to operate in perpetual consultant mode.  What I mean is that I’m always looking for a way to help them, even when I decline taking the work.

In the event that I ever do what we’re discussing about here, “breaking up” with a client, I still maintain this attitude.  And that’s what I’d recommend here.  There are two main ways, off the top, that you can be helpful with a break-up in this situation.

In both cases, you’re getting out of the situation.  But, unlike just phoning it in one day (or giving a couple of weeks of notice), you’re making this about their best interests rather than yours.

I’d say beyond getting out of the immediate situation here, there are some broader lessons for free agents to take away here.  For the rest of this post, I’ll speak to these.  How can you keep things favorable and avoid nightmarish client engagements?

First up, let’s address this idea of “powering through” serious misgivings.  I’ve done this myself, plenty.  And each time, I learn more and more to trust my gut.  If it doesn’t feel right, it’s probably not going to go well.

This can feel really alien.  If you’re coming from the salaried world, you typically don’t have a choice other than the drastic step of quitting.  So we wind up conditioned to power through.  And, once you’re out in the freelance world, especially at first, you tend to cling to gigs like financial life preservers.  Turning down money because the project smells wrong seems like a bridge too far.

But you need to learn to do exactly that: turn down gigs that have produce bad feeling.

In the case of this reader question, think how many hours have been lost to a bad gig when they could have been spent finding a better one.  Your ideal clients/projects are out there — be choosy about looking for them.

Build Checkpoints into Your Engagements

All of this has a bit of a waterfall-y feeling to it.  The project was somehow ill-considered and it has entered a death march phase.  The budget war over change requests has commenced.  And everyone just hopes that if they put their heads down and slog through it, something passable will eventually wheeze across the finish line.

But perhaps most waterfall-y of all, people raised red flags early on.  And decision makers ignored those red flags.  Yikes.

If you’re going to do contract-style work, add a wrinkle to you next contract.  Agree to the work as you normally might, but propose at the outset some checkpoints at which both parties must agree to renew the contract.  And make it clear that this isn’t a given in either direction.

Clients might hesitate at the idea that you’ll turn over as staff, but they’ll also probably like the implied escape hatch it gives them.  And for you, this forces a conversation every so often that has some weight to it.  Now, when you raise red flags, you’re not just a contractor/pseudo-employee grumbling about the work.  Instead, you’re a vendor saying that failure to address your concerns will result in you not renewing the paper.

I’ll close with one final bit of advice.  If you’re a free agent doing work for which there is a project manager, that’s a smell.  Nothing against project managers, but one on the project means it’s their project — not yours.

As a free agent, you’re not an employee.  That means that you don’t get partial credit for an annual performance review that includes “exceeds expectations” for “integrity” or whatever.  All that matters to your project portfolio is the success of the project and your intervention with the client.  But here, you don’t actually have much control over that, let alone total control.

The lesson here?  As you shop for future gigs, look for ones where successful delivery of the project is within your control.

You can then roll the advice here into one general framework for answering the question.  When should you pull the fire alarm and run out of the building?  At the very beginning, before you’ve agreed to anything, when you see that there are red flags and you don’t control the success of the project.