What is Your Next Action?

I just got back from a long weekend vacation and am still getting settled and back into the swing of things, so this is going to be another relatively short post.  I’ll soon return to your regularly scheduled extended rants and code-cast posts, but I need a little slack in the meantime.

For the last six months or so, I’ve been making a 5 hour drive twice a week.  This has provided me with a lot of opportunities to listen to books through Audible and Overdrive, and I’ve been listening to a lot of non-fiction stuff that runs the gamut from tech to sociology to science.  Recently, I took a suggestion from a comment in a previous post and read/listened to “Getting Things Done.”

It’s an interesting book, to be sure.  I was relatively gratified to listen to it and discover that I was actually already implementing a pretty big cross section of the suggestions, but more through Trello than a lot of the physical means referred to in the book (I think it’s something like 13 years old, so that’s to be expected).  The only downside to this gratification is that I didn’t really take a ton of pointers away, but rather just a handful of optimizations that I might make.  But one of those, I think, is pretty important: explicitly deciding on a “next action.”

I’ll paraphrase an example of what I mean from the book, based on my memory of listening.  Let’s say that you have a todo list, and one of the items on it is “get new tires.”  This seems straightforward enough, but it’s actually a little bit vague, and, more importantly, it’s not concretely actionable.  You can’t just walk outside and say, “new tires!” and expect that to happen.  In order to complete this item, you need to think about it for a bit and decide on a concrete thing to do next.  This might mean thinking, “well, I have to buy the tires, but I wanted to check with Steve to see if he could get me a discount at his tire shop.”  And so your concrete next action becomes “Call Steve about tires” rather than “get new tires.” 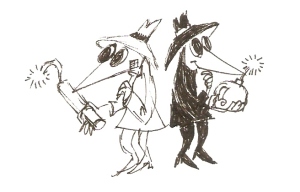 For me personally, this struck a particular chord.  In my Trello workflows for keeping track of my life and work, I’ve noticed that there are certain “second class citizens” that always manage not to get done and to sit there sullenly like the last kid to get picked for a sports team.  I used to think the problem was maybe that they were too big or too vague, but after listening to this book and reflecting on it, it’s that they’re not actionable enough.  It’s the cards that are the least clear about what comes next that gum up the works.

The trick that I’m trying to follow and that you may find valuable is that when you’re making lists of things to do, take a moment and frame them in terms of next action.  It’s all too easy not to, since “get new tires” seems pretty actionable at first blush.  But force yourself to look for the real next action, even if it takes a little extra time.  I’m finding that it gets quicker with practice, and it makes things more efficient.

That’s a great way of putting it — “something I can execute without thinking.” There seems to be a particular kind of productivity zen when I’m going through my todo list and I know exactly how to do everything on it.