Category: The Life of a Programmer Tags: Office Politics

I’m about to head off for a small vacation, so I’ll leave you with a relatively short post until I pick things up, probably a week from now.

If one were to track the small indignities of life that add up to serious grievances, it’s temping to think that these would be expressed in terms of, “things I have to do but don’t want to.” If you listen to someone talk about quitting a job, you’d hear about the rolled up grievances and imagine the small indignities. “I can’t stand my boss” would really be a series of things like, “have to go to his status meeting” and “have to respond to emails at all hours of the night.” You can imagine the exercise with other things that fill up the occasional exit interview that’s honest.

But at its core, I don’t think it’s “things we don’t want to do but have to do anyway” that create the important grievances, but rather, “things we think are stupid but have to do anyway.” There are plenty of things that I don’t really want to do, but know make sense, and so I do them anyway. Going to the dentist, working out for the most part, getting up in time to go to a meeting even after sleeping for only 4 hours come to mind. I make the best of the situation because I know these things make sense, and any resultant unhappiness is fleeting.

It’s the things that I think are stupid that result in unhappiness that is more than fleeting. If I have to get up to go to the dentist to have my teeth cleaned, I suffer through and then, after, think, “well, my teeth feel great, and I don’t have to do that again for six months, so, alright, onto the rest of my day.” If I have to go to the DMV because Illinois randomly decided that I owe them $200 for some new tax and the ‘convenience fee’ for online payment is $45, I’ll be in a seriously bad mood while I do it and then still residually salty for the rest of the day.

When it comes to sources of perceived stupidity or pointlessness, I can think of three loose categories: 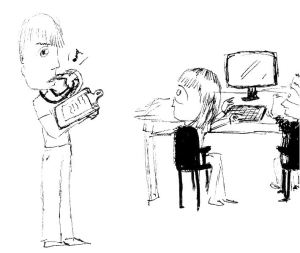 The first category exists at most institutions to varying degrees and is straightforward enough: it’s your TPS reports and other infantilizing things that you have to do because someone, somewhere once got sued for something.  The second category boils down to “team lead pulls rank on you about a course of action and you have to go along with what she says, even though you think it’s stupid.”  The third category is “mid level manager shows up 10 minutes late to meeting because he can’t bother to be on time and then dispatches someone to get coffee for him, even though that person is a professional engineer.”  It’s a uniquely aggressive action in that both parties are completely aware that the aggressor is manufacturing stupidity, but the message is essentially, “I have the power to make you do stupid things, and I enjoy using it.”

These things aggregate and fester over the course of time, probably roughly in the numbered ordered above.  People will usually tolerate a maze of bureaucracy more easily than semi-regular demeaning interactions, all other things being equal.  But everyone has some kind of aggregated stupidity score that, when hit, triggers them to quit.  Actual ‘scores’ will vary widely depending on situation and individual personality.

The moral of the story is this.  By and large, people aren’t going to burn out and be driven away by hard or unpleasant work alone.  They’ll burn out and be driven away by work that they think is stupid.  So if you’re focused on retention and morale, pay specific attention not so much to whether people are doing grunt work but rather the value (or lack thereof) they perceive in the work.

This is actually a very good observation – thank you.

Glad you liked, and I appreciate the feedback!

Precisely to your point, when I was in the military and deployed to some slightly dangerous areas, people spent remarkably little time, complaining about the 120 degree weather or even the mortars that were periodically lobbed at the base. Of course no one liked these things, but they found a way to be mostly blithe about it. But add some pointless/demeaning processes and rules on top of these otherwise unpleasant conditions, and people would be completely livid about it.

That’s a great example of what I was driving at with this post. I could imagine myself feeling exactly the same way in that situation.