A lot was made of my recent and popular post, The Beggar CEO and Sucker Culture. Given the traffic that it generated, discussions took place ranging from the merits of developers unionizing to startup versus established corporate cultures. Perhaps the most common theme, however, was what my call to action was and the actual mechanics of escaping sucker culture.

In my comments and in social media, people offered messages along the lines of, “what do I do to escape when I’m trapped,” and “I drew a line in the sand and got fired, so don’t rock the boat.” To be clear on what I was advocating in my post, I wanted people to stop accepting that they owed companies (and people like Victoria) free hours and to stop feeling guilty about not wanting to oblige. This is a far cry from a call to action of, “tell your boss you’ll never work a minute over 40 hours again and if she doesn’t like it, you quit.” I was calling for a subtle shift in attitude and not any specific action.

But this does beg the fair question of “what comes next?” Resolving not to feel like you owe your spare time to the company is all well and good. But it doesn’t get you home to your loved ones – it just gets you to feel resentful while you continue working the same schedule. So in this post, I’ll offer up some ideas for how to reclaim your hours and stop being forced to give handouts to companies. 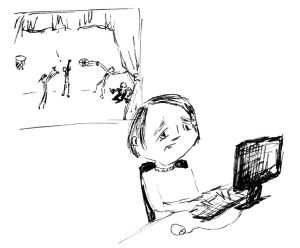 I want to be clear about something, though.  I’m offering ideas for things you might try and not a step-by-step how-to.  Office political situations are extremely nuanced, and, if you like the thoughts I’m offering, you’ll need to figure out how to tailor them to your own situation.

Explain what you want, and why.

I cringe when I hear someone take a purely principled stand on hours worked.  For instance, “I give it my all for 8 hours, but that’s all I work, and that’s enough.”  I cringe because, rightly or wrongly, it comes off as laziness masquerading behind some arcane, academic sense of what’s right.  Whether or not that’s the motivation, it seems like the motivation.  So don’t argue on principle; argue as a human.

If Victoria and her lieutenants are pressuring you to feel like you owe them 9 or 10 hours per day instead of the tacitly agreed-upon 8, you need to offer some sense of opportunity cost.  Every hour you donate to them is an hour that you’re not spending doing something for yourself: being with loved ones, pursuing a hobby, seeing to your health, doing charitable work, etc.  Lobby for a normal working schedule by talking about how you’re being prevented from doing these things.

Talk to your manager or whoever it may be, and express that your preference is to cap your days at 8 hours because, when you don’t, you lose out on time bonding with your son over his homework.  This swings the guilt pendulum back in the direction of the company.  Victoria wants you to feel guilty for not donating an extra hour or two to her vision — make her feel guilty for clawing those hours away from a child.  But you’re doing it by expressing a preference and not issuing an ultimatum.

If directly stating your case isn’t for you, either because you feel it’s too risky or you just don’t feel comfortable, you have other options.  When confronted with an employer that likes to culturally squeeze people for hours, perception can matter more than productivity.  It’s not so much that you need to donate tons of hours as it is that you need to be known as someone that doesn’t say “no” to the company.

In situations like this, you can look at your own calendar, and earmark some nights and weekends that you don’t have much going on.  If there’s extra work that needs to happen, volunteer to really log some hours.  This helps you to build up a bank of credibility so that it’s a lot easier and less damaging to say “no” when you have things that really matter.

And if you feel comfortable going a little bit further, you can even parlay some of these efforts into comp time that you negotiate up front.  “Hey, I see that we really need to hit a milestone next week — how about I come in Saturday to help with that in exchange for taking the first Monday off next month?”  The net hours will wash (8 on Saturday for -8 on some future Monday), but you’ll get nearly the same reputation bump as you would by just donating the Saturday.  The harried manager isn’t worried about next month, but rather about next week, and you’re helping… by volunteering to work on a weekend.

Look busier than you are.

The above two suggestions are predicated upon your willingness to tolerate some extra hours and to donate some free time to the company, on a discretionary basis.  They assume a relatively decent working relationship and good faith overtures by both parties.  Maybe that doesn’t describe you, and you’re in a situation where your whip-cracking manager is more of an enemy than anything else.

One thing that doesn’t change is the long hours pressure/guilt is a matter of culture and a matter of perception.  The idealist race to the bottom is won by demonstrating your willingness to sacrifice yourself to the needs of the company.  You look like a good soldier by doing things like staying at the office until all hours of the night, spending your free time researching ways to help the company, answering emails and calls at all hours, etc.  But you can look a lot better than the time you actually put in.

As a simple example, make it a point to log into your email or VPN every night at a random time between 7 and 10 PM, and to send or respond to a lot of emails.  If you spend 10 or 15 minutes a night doing this, you’ll quickly build a reputation as someone who burns the midnight oil.  At this point, you can blow out of the office at 4:30 or so without any worries because everyone knows you work all night at home.  It may not be this exact approach, but there are always ways that you can create the impression that you’re throwing a lot more time at the company than you really are.

Do other things at work.

If you really can’t comfortably push back and negotiate for a sane arrangement, you don’t have a good relationship with the employer, and there’s no way around excessive butts-in-seats presence, you can still reclaim your time.  If you’re a knowledge/office worker, you probably spend a good chunk of your day on your computer and you probably get on the phone here and there.  You probably also have various chores and tasks at home that require computer and phone time.  So bring your home chores to work.

Pay your bills at the office.  Call your kid’s daycare.  Research your next vacation.  Heck, if you have enough privacy, play computer games.  Being at the office 10 hours per day tends to earn you a good bit of leeway in your activities at any given moment.  If someone walks by at 6:30 PM and sees that you’re paying a bill or a playing a video game, it’ll be hard to give you a hard time when you’re in hour 9.5 of your 8 hour day.

But, by and large, no one will “catch” you doing anything.  They’ll just leave for the night and see that you’re still at your desk.  They won’t know if you’re generating documentation for the company’s upcoming software release, shopping on E-Bay, teaching yourself a new programming language, or reading Buzzfeed.  They’ll just assume you’re working hard.

If you’ve worked your way this far down into the post, looking for increasingly drastic advice, you have a pretty dysfunctional relationship with your employer.  Maybe you’re content to settle into a protracted period of mutual loathing, but I wouldn’t advise it.  Assuming that the management there isn’t utterly malignant, they’d be better suited to have grinder idealists than people interested in work-life balance.  And you’d be better suited to work somewhere that didn’t make it a matter of culture and policy to extract free labor from people.

So just move on.

I’m not saying that you should march in and quit.  I’m saying that you should start looking for your next job, no matter how tired you might be from kicking in lots of hours.  It’s easy to get trapped in a bad cycle of excessive hours at a job preventing you from having the time to look for other jobs.  But fight through the burn.  Or, better yet, stay late hours at the office sending out resumes and brushing up on marketable skills while everyone thinks you’re toiling away for the company for free.

If you’re working for a Victoria, and you’ve had enough, doing something — anything — about it will be inherently risky.  By definition, you’re trying to do something different than what your boss wants you to do.  You have to recognize this and manage it.

Whatever strategy you pick, it might have to be a long and subtle play.  But, don’t give up and don’t lose sight of the goal.  The core of what I was advocating in the popular post was that you stop considering it “the right thing” to donate a bunch of your spare time to a company for no reciprocity.  As long as you understand that while understanding the nuance of your situation, sooner or later, you’ll figure out a way to stop giving away your work for free.

Here’s another way to look busy:

I like the idea of doing personal stuff while “on the clock”. They have to be done, so why not?