Beware of The Magnetars in Your Codebase

Lately, I’ve been watching a lot of “How the Universe Works” and other similar shows about astronomy. I’ve been watching them a lot, as in, I think I have some kind of problem. I want to watch them and find them fascinating and engaging and yet I also seem suddenly to be unable to fall asleep without them on.

Last night, I was indulging this strange problem when I saw what has to be the single most intense thing in the universe: a magnetar. Occasionally when a massive star runs out of fuel in its core, it explodes into as a supernova and spews matter and radiation everywhere, sending concussive shock waves hurtling out into the universe. In the aftermath, the rest of the star that doesn’t escape out collapses in on itself into an unimaginably dense thing called a “neutron star,” which is the size of Manhattan but weighs as much as the sun (for perspective, a sugar cube of neutron star would weigh as much as all of the people on earth combined).

One particularly exotic type of neutron star is called a magnetar. It’s a neutron star with a magnetic field of absolutely mind-boggling strength and a crust made out of solid iron (but up to 10 billion times stronger than steel, thanks to the near-black-hole-like gravity of the star crushing imperfections out of the crystals that form the crust). A magnetar is so intensely magnetized that if the moon were a magnetar (and forget the gravity for a moment) it would tear the watch off of your wrist and render your credit cards useless. This thing rotates many times per second, whipping its magnetic field into a frenzy and sloshing the ultra-dense neutron goo that makes up its core into a froth until the internal pressure causes something called a “starquake,” which, if it were measured on a the Richter scale, would be a 32. When these starquakes happen, the result is that the magnetar spews a torrent of radiation so powerful that it has a profound effect on the earth’s magnetic field and atmosphere from halfway across the Milky Way.

So to recap, a magnetar is a tiny thing leftover from a huge event that’s not really visible or particularly noticeable from a distance. At least, it isn’t noticeable until the unimaginable destructive force roiling in its bowels is randomly unleashed, and then it pretty much annihilates anything in its close vicinity and has a profound effect universally. 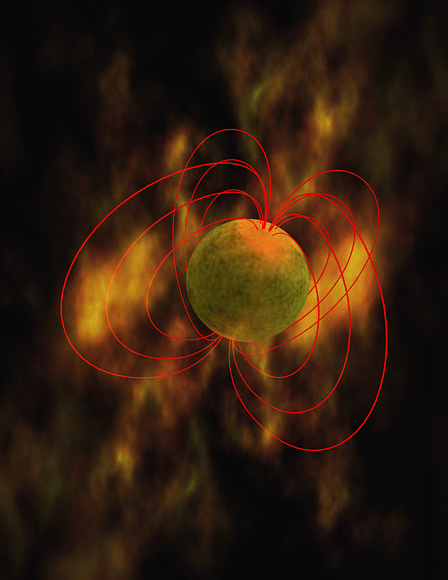 I was idly thinking about this concept today while looking at some code, and I realized something. How many projects do you work on where there’s some kind of scramble or to get some new feature in ahead of schedule, to absorb scope creep and last minute changes, or to slam some kind of customization into production for a big client with a minimum of testing? Whether this goes well or poorly, the result is generally spectacular.

And when the dust settles and everyone has taken their two or three weeks off, come down from the ledge and breathed a sigh of relief, the remnants of the effort is often some quiet, dense, unapproachable and dangerous bit of code pulsing in the middle of your code base. You don’t get too near it for fear that it will tear the watch off of your wrist or result in a starquake — okay, more accurately, that it will introduce some nasty regression bug — and you just kind of leave it there to rotate and pulse ominously.

Much later, when you’ve pretty well forgotten it, it erupts and unleashes a torrent of devastation into your team’s life. One day you suddenly recall (one day too late) that if you don’t log into that one SQL server box and restart that scheduled task on any March 1st not in a leap year, all 173,224 users of the Initrode account are suddenly unable to log into anything in their ERP system, and they’re planning a shipment of medical supplies to hurricane victims and abused puppies. You’ve had all of the atoms in your organization pulverized out of existence by the flare of a magentar in your code base.

How do you avoid this fate? I’ll give you a list of two:

The first one is the more politically tenable one in organizations. The business is going to do what the business is going to do, and that’s to allow sales to promise clients a cure for cancer by June 15th if they promise to pitch in personally for steak dinners for the dev team, on their honor. It can be hard to push back against it, so what you can do is ride the storm out and then make sure you carve out time to repair the damage when the dust settles. Don’t let that rogue task threaten your very existence once a year (but not in leap years). And don’t cop out by documenting it on a wiki somewhere. Do the right thing and write some code that automates whatever it is that should trigger it to happen. While you’re at it, automate some sort of reminder scheme for monitoring purposes and some fault tolerance, since this seems pretty important. You may have needed to hack something out to meet your deadline, but there’s nothing saying you have to live with that and let it spin and pulse its way to bursting anger.

The better solution, though, is to push back on the business and not let supernovae into your development process in the first place. This is hard, but it’s the right path. Instead of disarming volatile things that you’ve introduced in a pinch, avoid introducing them altogether. Believe it or not, this is a skill that actually takes practice because it involves navigating office-political terrain beyond simply explaining things to someone in rational fashion and prevailing upon their good judgment.

But really, I could boil these two points down to one single thing that logically implies both: care about the fate of the project and the codebase. If you invest yourself in it and truly care about it, you’ll find that you naturally avoid letting people introduce explosive forces in the first place. You certainly don’t allow alien, stealth deathbombs to fester in it, waiting to spew radiation at you. Metaphorical radiation, that is. Unless you code for a nuclear power company. Then, real radiation.