A Metaphor to Help You Suck at Writing Software

Category: The Life of a Programmer Tags: Agile, Metaphors for Software, Software Management

Let’s set the scene for a moment. You’re a workaday developer in a workman kind of shop. A “waterfall” shop. (For back story on why I put quotes around waterfall, see this post). There is a great show of force when it comes to building software. Grand plans are constructed. Requirements gathering happens in a sliding sort of way where there is one document for vague requirements, another document for more specific requirements, a third document for even more specific requirements than that, and repeat for a few more documents. Then, there is the spec, the functional spec, the design spec, and the design document. In fact, there are probably several design documents.

There aren’t just the typical “waterfall” phases of requirements->design->code->test->toss over the wall, but sub-phases and, when the organism grows large enough, sub-sub-phases. There are project managers and business managers and many other kinds of managers. There are things called change requests and those have their own phases and documents. Requirements gathering is different from requirements elaboration. Design sub-phases include high-level, mid-level and low-level. If you carefully follow the process, most likely published somewhere as a mural-sized state machine or possibly a Gantt chart unsurpassed in its perfect hierarchical beauty, you will achieve the BUFD nirvana of having the actual writing of the code require absolutely no brain power. Everything will be so perfectly planned that a trained ape could write your software. That trained ape is you, workaday developer. Brilliant business stakeholder minds are hard at work perfecting the process of planning software in such fine grained detail that you need not trouble yourself with much thinking or problem solving.

Dude, wait a minute. Wat?!? That doesn’t sound desirable at all! You wake up in the middle of the night one night, sit bolt upright and are suddenly fundamentally unsure that this is really the best approach to building a thing with software. Concerned, you approach some kind of senior business project program manager and ask him about the meaning of developer life in your organization. He nods knowingly, understandingly and puts one arm on your shoulders, extending the other out in broad, professorial arc to help you share his vision. “You see my friend,” he says, “writing software is like building a skyscraper…” And the ‘wisdom’ starts to flow. Well, something starts to flow, at any rate.

Like a skyscraper, you can’t just start building software without planning and a lot of upfront legwork. A skyscraper can’t simply be assembled by building floors, rooms, walls, etc independently and then slapping them altogether, perhaps interchangeably. Everything is necessarily interdependent and tightly coupled. Just like your software. In the skyscraper, you simply can’t build the 20th floor before the 19th floor is built and you certainly can’t interchange those ‘parts’ much like in your software you can’t have a GUI without a database and you can’t just go swapping persistence models once you have a GUI. In both cases every decision at every point ripples throughout the project and necessarily affects every future decision. Rooms and floors are set in stone in both location and order of construction just as your classes and modules in a software project have to be built in a certain order and can never be swapped out from then on. 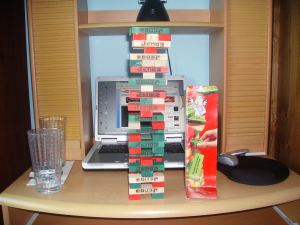 But the similarities don’t end with the fact that both endeavors involve an inseparable web of complete interdependence. It extends to holistic approaches and cost as well. Since software, like a skyscraper, is so lumbering in nature and so permanent once built, the concept of prototyping it is prima facie absurd. Furthermore, in software and skyscrapers, you can’t have a stripped-down but fully functional version to start with — it’s all or nothing, baby. Because of this it’s important to make all decisions up-front and immediately even when you might later have more information that would lead to a better-informed decision. There’s no deferral of decisions that can be made — you need to lock your architecture up right from the get-go and live with the consequences forever, whatever and however horrible they might turn out to be.

And once your software is constructed, your customers better be happy with it because boy-oh-boy is it expensive, cumbersome and painful to change anything about it. Like replacing the fortieth floor on a skyscraper, refactoring your software requires months of business stoppage and a Herculean effort to get the new stuff in place. It soars over the budget set forth and slams through and past the target date, showering passerby with falling debris all the while.

Or, to condense even further, this metaphor helps you build software that is brittle and utterly cross-coupled beyond repair. This metaphor is the perfect guide for anyone who wants to write crappy software.

Once you take the building construction metaphor to its logical conclusion, it seems fairly silly (as a lot of metaphors will if you lean too heavily on them in their weak spots). What’s the source of the disconnect here? To clarify a bit, let’s work backward into the building metaphor starting with good software instead of using it to build bad software. 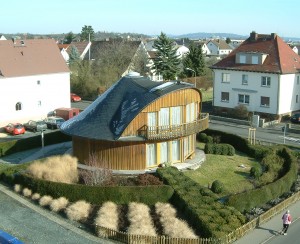 A year or so ago, I went to a talk given by “Uncle” Bob Martin on software professionalism. If I could find a link to the text of what he said, I would offer it (and please comment if you have one) but lacking that, I’ll paraphrase. Bob invited the audience to consider a proposition where they were contracting to have a house built and maintained with a particular contractor. The way this worked was you would give the contractor $100 and he would build you anything you wanted in a day. So, you could say “I want a two bedroom ranch house with a deck and a hot-tub and 1.5 bathrooms,” plop down your $100 and come back tomorrow to find the house built to your specification. If it turned out that you didn’t like something about it or your needs changed, same deal applied. Want another wing? Want to turn the half bath into a full bath? Want a patio instead of a deck? Make your checklist, call the contractor, give him $100 and the next day your wish would be your house.

From there, Bob invited audience members to weigh two different approaches to house-planning: try-it-and-see versus waterfall’s “big design up front.” In this world, would you hire expert architects to form plans and carpenters to flesh them out? Would you spend weeks or months in a “planning phase”? Or would you plop down $100 and say, “well, screw it — I’ll just try it and change it if I don’t like it?” This was a rather dramatic moment in the talk as the listener realized just before Bob brought it home that given a choice between agile, “try it and see” and waterfall “design everything up front” nobody sane would choose the latter. The “waterfall” approach to houses (and skyscrapers) is used because a better approach isn’t possible and not because it’s a good approach when there are alternatives.

Given the push toward Agile software development in recent years and the questionable parallels of the metaphor in the first place, why does it persist? There is no shortage of people who think this metaphor is absurd, or at least misguided:

If you google things like “software construction analogy” you will find literally dozens of posts like these.

So why the persistence? Well, if you read the last article, by Thomas Guest, you’ll notice a reference to Steve McConnell’s iconic book “Code Complete.” This book has an early chapter that explores a variety of metaphors for software development and offers this one up. In my first daedtech post I endorsed the metaphor but thought we could do better. I stand by that endorsement not because it’s a good metaphor for how software should be developed but because it’s a good metaphor for how it is developed. As in our hypothetical shop from the first section of the post, many places do use this approach to write (often bad) software. But the presence of the metaphor in McConnell’s book and for years and years before that highlights one of the main reasons for persistence: interia. It’s been around a long time.

But I think there’s another, more subtle reason it sticks around. Hard as it was to find pro posts about the software-construction pairing, the ones I did find share an interesting trait. Take a look at this post, for instance. As “PikeWake” gets down to explaining the metaphor, the first thing that he does is talk about project managers and architects (well, the first thing is the software itself, but right after that come the movers and shakers). Somewhere below that the low-skill grunts who actually write the software get a nod as well. Think about that for a moment. In this analogy, the most important people to the software process are the ones with corner offices, direct reports and spreadsheets, and the people who actually write the software are fungible drones paid to perform repetitive action, rather than work. Is it any wonder that ‘supervisors’ and other vestiges of the pre-Agile, command and control era love this metaphor? It might not make for good software, but it sure makes for good justification of roles. It’s comfortable in a world where companies like github are canning the traditional, hierarchical model, valuing the producers over the supervisors, and succeeding.

Perhaps that’s a bit cynical, but I definitely think there’s more than a little truth there. If you stripped out all of the word documents, Gantt charts, status meetings and other typical corporate overhead and embraced a world where developers could self-organize, prioritize and adapt, what would people with a lot of tenure but not a lot of desire or skill at programming do? If there were no actual need for supervision, what would happen? These can be unsettling, game changing questions, so it’s easier to cast developers as low-skill drones that would be adrift without clever supervisors planning everything for them than to dispense with the illusion and realize that developers are highly skilled, generally very intelligent knowledge workers quite capable of optimizing processes in which they participate.

In the end, it’s simple. If you want comfort food for the mid-level management set and mediocrity, then invite someone in to sweep his arm professorially and spin a feel-good tale about how building software is like building houses and managing people is like a father nurturing his children. If you want to be effective, leave the construction metaphor in the 1980s where it belongs.

[…] little over a year ago, I wrote a post explaining how you can use the metaphor, “building software is like building a tower” […]

People feel insecure about system development. We are dealing with levels of complexity that no human can possibly master. So all those metaphors are examples of cargo cults. It gives people comforting impression that we can tame and control system development.

Definitely. I think you’re right on the money about the illusion of more control than really exists.