To start off the week, I have a satirical post about projects developed using the waterfall ‘methodology.’ (To understand the quotes, please see my post on why I don’t think waterfall is actually a methodology at all). I figured that since groups that use agile approaches and industry best practices have a whole set of xDD acronyms, such as TDD, BDD, and DDD, waterfall deserved a few of its own. So keep in mind that while this post is intended to be funny, I think there is a bit of relevant commentary to it.

For those of you who’ve never had the pleasure to read John Steinbeck’s “Of Mice and Men,” any SDD practitioner will tell you that it’s a heartwarming tale of two friends who overcome all odds during the Great Depression, making it cross-country to California to start a rabbit petting zoo. And it’s that outlook on life that they bring to the team when it comes to setting deadlines, tracking milestones, and general planning. 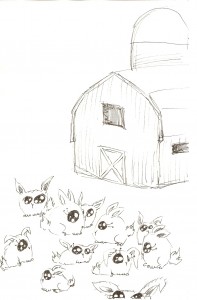 Spoiler alert. At the end of Steinbeck’s novel, the idyllic rabbit farm exists only in the mind of one of the friends, shortly before he’s shot in the back of the head by the other, in an act that is part merciful euthanasia and part self-preservation. The corporate equivalent of this is what eventually happens to our project manager. Every week he insists that everything will be fine and that they’re pretty close to the promised land until someone puts the project out of its misery.

Steinbeck-Driven Development is not for everyone. It requires a healthy ability to live in deluded fantasy land (or, in the case of the novel, to be a half-wit). SSDD project managers are not the relentless optimists that their SDD counterparts are. In fact, they’re often pretty maudlin, having arrived at a PM post on a project that everyone knows is headed for failure and basically running out the clock until company bankruptcy or retirement or termination or something. These are the equivalents of gamblers that have exhausted their money and credit and are playing at the penny tables in the hopes that their last few bucks will take them on an unprecedented win streak. Or, perhaps more aptly, they’re like a lonely old toy-maker, sitting in his woodshop, hoping for a toy to come to life and keep them company.

This PM and his project are doomed to failure, so he rarely bothers with status meetings, creates a bare minimum of power points, and rarely ever talks about milestones. Even his Gantt charts have a maximum of three nested dependencies. It’s clear to all that he’s phoning it in. He knows it’s unlikely, but he pins his slim hope to a shooting star: maybe one of his developers will turn out to be the mythical 100x developer that single-handedly writes the customer information portal in the amount of time that someone, while struggling to keep a straight face, estimated it would take to do.

As projects go along and fall further and further behind schedule and the odds of a shooting star developer become more and more remote, the SSDD project manager increasingly withdraws. Eventually, he just kind of fades away. If Geppetto were a real life guy, carving puppets and asking stars to make them real children, he’d likely have punched out in an 19th century sanitarium. There are no happy endings on SSDD projects–just lifeless, wooden developers and missed deadlines.

There is no great mystery to FDD projects. The fate of the business is in your hands, developers. Sorry if that’s a lot of pressure, but really, it’s in your hands.

The most important part of a FDD project is to make it clear that there will be consequences–dire consequences–to the business if the software isn’t delivered by such and such date. And, of course, dire consequences for the business are pretty darned likely to affect the software group. So, now that everyone knows what’s at stake, it’s time to go out and get that complex, multi-tiered, poorly-defined application built in the next month. Or else.

Unlike most waterfall projects, FDD enters the death march phase pretty much right from the start of coding. (Other waterfall projects typically only start the death march phase once the testing phase is cancelled and the inevitability of missing the deadline is clear.) The developers immediately enter a primal state of working fourteen hours per day because their very livelihoods hang in the balance. And, of course, fear definitely has the effect of getting them to work faster and harder than they otherwise would, but it also has the side effect of making the quality lower. Depending on the nature of the FDD project and the tolerance level of the customers for shoddy or non-functional software, this may be acceptable. But if it isn’t, time for more fear. Consequences become more dire, days become longer, and weekends are dedicated to the cause.

The weak have nervous breakdowns and quit, so only the strong survive to quit after the project ends.

One of the most fun parts of waterfall development is the the estimation from ignorance that takes place during either the requirements or design days. This is where someone looks at a series of Visio diagrams and says, “I think this project will take 17,388.12 man-hours in the low risk scenario and 18,221.48 in the high-risk scenario.” The reason I describe this as fun is because it’s sort of like that game you play where everyone guesses the number of gumballs in a giant jar of gumballs and whoever is closest without going over wins a prize. For anything that’s liable to take longer than a week, estimation in a waterfall context is a ludicrous activity that basically amounts to making things up and trying to keep a straight face as you convince yourself and others that you did something besides picking a random number.

Well, I broke this task up into 3,422 tasks and estimated each of those, so if they each take four hours, and everything goes smoothly when we try to put them all together with an estimate for integration of… ha! Just kidding! My guess is 10,528 hours–ten because I was thinking that it’d have to be five digits, the fve because it’s been that many days that we’ve been looking at these Gantt charts and sequence diagrams, and twenty-eight because that was my number in junior high football. And you can’t bid one hour over me because I’m last to guess!

But PADD PMs suck all of the fun out of this style of estimation by pressuring the hours guessers (software developers) into retracting and claiming less time. But they don’t do it by showing anger–the aggression is indirect. When the developer says that task 1,024, writing the batch file import routine, will take approximately five hours, the PADD PM says, “Oh, wow. Must be pretty complicated. Jeez, I just assumed that a senior level developer could bang that out in no more than two. My bad.” Shamed, the developer retracts: “No, no–you’re right. I figured the EDI would be more complicated than it was, so I just realized that my estimate is actually two hours.”

Repeated in aggregate, the PADD PM is some kind of spectacular black belt/level 20/guru/whatever metric is used to measure PM productivity, because he just reduced the time to market by 60% before a single line of code was ever written. Amazing! Of course, talk at the beginning of the project is cheap. The real measure of waterfall project success is figuring out who to blame and getting others to absorb the cost when the project gets way behind schedule. And this is where the PADD master really shines.

To his bosses, he says, “man, I guess I just had too much faith in our guys–I mean, I know you hire the best.” To the developers, he says, “boy, your estimates seemed pretty reasonable to me, so I would have assumed that everything would be going on time if you were just putting in the hours and elbow grease… weird.” To the end-users/stakeholders, he says, “it’s strange, all of our other stakeholders who get us all of the requirements clearly and on time get their software on time–I wonder what happened here.”

There’s plenty of blame to go around, and PADD PMs make sure everyone partakes equally and is equally dissatisfied with the project.