The Retreat of the Introvert

If you’ve ever been nervous at a cocktail party or similar event and spilled a drink, you have an acute understanding of how time can elongate. There’s the second your hand brushes the glass and the second the glass offers its liquid to the expensive carpet, and while the seconds are right next to one another, it seems as though minutes or even hours pass in between them. In periods of duress, time spreads out, like (to borrow the words of T.S. Eliot) a patient etherized upon a table.

When you’re an introvert, this happens when social situations become volatile. And, by “social situations,” I don’t mean cocktail parties exclusively, but really any sort of interaction with others. It could be that you’re put on the spot at a meeting in which you weren’t expected to talk. It could happen at a night out when some friend volunteers you for karaoke at the bar. It could happen from something as simple and apparently routine as your girlfriend saying “we need to talk” when the two of you are eating Chinese at home. There’s a trigger and then the elongation occurs and it seizes you, demanding action that you know to be socially impossible. But if you gave in, it would be oh so sweet…

You would excuse yourself hastily and leave the room. You’d look back guiltily and then keep going, through the hallway and out the main door. Your car would be sitting there, tantalizing, and you’d cast off your feelings of guilt, assuring yourself that you’d make it right tomorrow, and you’d get into your car and drive. The drive would take you… out.

You leave the urban sprawl and head through the suburbs, mini-malls decreasing in size and modernity as you push the gas pedal to 10 over, and then 20. Sooner or later, you see your first snatches of trees and you beg for the end of suburbia. Then, it happens, sudden and shocking. One moment, there’s a gas station, a Subway and a Midas, and then, suddenly, nothing but trees. You’re free.

But you don’t stop. You keep driving and driving, getting out to stretches of highway where even the exits interrupt the trees only every 10 or 12 miles. Then, you pick one of those exits and get off the interstate, barreling along some county road at a speed that you figure is probably illegal but doesn’t matter and you see nothing but trees, farms and the occasional pickup truck heading the other way. You drive this way for hours, feeling like you’re in an extremely desolate, wooded version of Tron.

Eventually, you stop seeing the pickup trucks and any signs of civilization. The roads become snaky, ill-kept, and eventually gravel and dirt. You press on, beyond any hope of a motel or gas station and one gravel road T-intersections with another. Eventually, you work your way up to a hill, past a rusty gate, and down what’s probably a driveway, arriving at a smallish cabin tucked into the woods so deeply that no one would find you for weeks. You park your car, get out, and head inside. 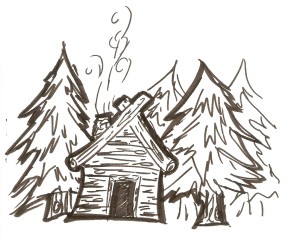 After a few minutes of fumbling around, you’ve got the water turned on, the lights going, the fireplace blazing, and the bare essentials ready for living. You settle in for the long haul, knowing that you may be a while. You’ve brought a tablet on which you can read the news of the world when the remote tower somewhere nearby is up to it, but you have no intention of answering email, taking calls in any form, or doing anything but being a passive lurker on the internet that seeps through here and there to your cabin. Your comfort is absolute and your isolation is perfect, with only the trickle of news from the world to distract you.

While the isolation is perfect, the situation is not. It’s not really even desirable. It’s not like the hormonally overwrought teenagers describe when composing bad poetry — there’s nothing ‘calming’ or ‘suiting’ or ‘beautiful’ about your isolation. It’s lonely and weird. You feel off-kilter, disconnected, sad and even a bit pathetic. But it’s so predictable. It’s safe. It’s marrying someone not because they’re attractive, interesting or romantically appealing but rather because they’re probably not a psycho and your biological clock is at 11:54 PM. You give in — you surrender. You pull the coarse wool blankets over you and fall fitfully asleep next to the kettle stove with your breath frosting the air.

And then your boss makes you the presenter. And then the terrible exhibitionist running karaoke night stuffs the microphone in your face. And then your girlfriend tells you that it seems like you’re drifting apart. And then you realize that you never made that drive, shut yourself off from the world and curled up in that tiny, crappy, peaceful cabin. You realize that everyone is looking at you expectantly, impatiently even, and that the best you can do is conjure up a fantasy that pretty much sucks, but where you’re being left alone, if cold, tired, and sad.

This is a bit off the beaten path for my normal kind of post, but I offer it up because I think maybe it’ll strike a chord. It doesn’t give you the ‘why’ of anything, but it sure does let you know that you aren’t the only one and that it can be overcome. I listen to people and converse. I go to cocktail parties and social gatherings. I attend meetings. I lead meetings. I spend entire days where I do nothing but attend various meetings, listen to people, navigate office realpolitik, and look to all the world as if I’m a social butterfly and an extrovert. But I live my entire life secretly wanting to sneak out, hop in that car and drive away.

Feeling this way doesn’t mean that you can’t succeed in the business world. You’re not alone and you’re not crazy. You just need to coach yourself to stay rational, keep your head, and be cool until the feeling passes. It may not be a cabin in the woods, but at the end of every day you get to retreat and regroup.

This advice sounded to me a lot like this other advice, form your previous post “Have a Cigar”, about not being a “business introvert”, I guess: “So what am I advocating, exactly? Simply that you refuse to buy into the notion that you’re just a “code slinger” and that all that “business stuff” is someone else’s problem. It’s not. It’s your problem. And it’s really not that hard if you pay attention. I’m not suggesting that you trade in your IDE for Microsoft Project and Visio, but I am suggesting that you spend a bit of time learning enough about… Read more »

That’s an interesting parallel. In that post, my main message was to avoid the temptation to be one dimensional and to say, “that business stuff just ain’t my job.” Here, I suppose there’s a similar vibe, but talking about taking on an active participation role in interactions, rather than in “the business.”

Of course my opinions are arm-chair psychology, yet I believe a good mentor (even a counselor or someone in the community you trust) would probably be a great resource in helping those who have severe reactions to situations where you have to interact with others. It’s important to realize that it’s not bad/good to be an introvert/extrovert. One needs to find a balance and lifestyle that works for him/herself. I would classify myself as an “ambivert” — I tend to go inward to recharge, yet I can hold my own in social interactions (and even teach group fitness classes). Thank… Read more »

And, that was kind of the idea in writing it. I see a lot of people, particularly early in their careers, pass on opportunities to speak up and be heard, at least at first. I think having someone to prod them and encourage them in the form of a mentor probably gets them to take a bit of a ‘risk’ and engage, but I was hoping to come at it from another direction and say, “what you’re feeling probably won’t go away, but I can say from experience that you can manage it.”

“Feeling this way doesn’t mean that you can’t succeed in the business world. ”

We just need to apply more effort than an extrovert. That’s it. 😉

Yep, that sounds about right. And often, it tends to be worth the effort.

If I had a choice, I’d work from home and code all day with my cat on my lap.

Unfortunately I cannot, so I’ll continue to head to work this week and answer the same question 5 times from my many different project managers, team members and bosses.

I find myself extremely introverted. So much so that answering a simple question about my own work can conjure a wave of heat and emotion, requiring a nice lonely walk afterwards. Yet, I can answer it over email no problem, and would be happy to.

I empathize, believe me. Maybe there’s a way you could do office hours or something… setup your day so that there’d be specific time for meetings and status reports and such and specific times when you’re in the zone and people don’t interrupt. Anytime I’ve negotiated that, it’s been a help for me personally.