Category: The Life of a Programmer Tags: Expert Beginner

I was going to write a post about my recent fascination with Selenium tonight, but with the current bandwidth I’m getting from my hotel wifi connection, I won’t have successfully installed Firefox until Thursday. Undaunted, I decided to go through my drafts folder and move a card out of that sizeable backlog. The one that I settled on came as a response to Damien’s comment in my first Expert Beginner post. Periodically, people happen across that post and continue to comment, and I continue to find the subject relatively interesting since this theme is one that doesn’t seem to be in danger of going away. The portion of his comment about which I thought I’d muse is as follows:

I’ve been thinking about this a little bit here and there over the last couple of months. The question essentially boils down to one of whether Expert Beginnerism is a specific, learned approach to one set of problems or whether it’s a general approach or even a personality trait (defect?). Is it possible to be woefully mistaken about your own competence in one area of life while otherwise being a relatively normal, well-adjusted and pleasant individual in other arenas? Operating hypothesis: yes, it is. Tentative evidence: karaoke. I’m serious. 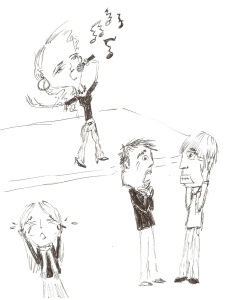 Make your way down to a local place that does karaoke nights and suffer through the whole evening. I can almost promise you that you’ll find a nice, social, well-adjusted person that, to everyone’s listening displeasure, thinks they’re really good at singing. Most likely, they’ve never thought of making a go at it professionally and so no one has ever told them the hard but kind truth about their abilities. People just wince inwardly and say, “oh, sure, that’s GREAT!” And so the would-be Aretha Franklin or Frank Sinatra, through various merciful white lies in the face of unimportance, comes to believe wrongly that she or he is a good singer in spite of easily available evidence to the contrary.

That’s all well and good, however, because no one is paying these room-clearers to sing or, worse still, to teach others to sing. Is it possible to be a professional Expert Beginner without being insufferable across the board? At one time, I created a taxonomy of Expert Beginners (at least those with whom I’ve interacted) and group them according to their tolerance for cognitive dissonance. A poor-man’s interpretation of that might be how red they’d turn when asked, “Sir, have you no shame?”

In the parlance of that taxonomy, we have Master Beginner, Company Man, and Xenophobe. To recap, Master Beginners are consummate blowhards that believe themselves incapable of being wrong (no shame at all). Company Men have a basic, queasily pragmatic operating philosophy of circular reasoning: “if I have it, then I must have earned it by merit.” (They’d bristle some at suggestions to the contrary, turning slightly red). Xenophobes are those who have hissy fits when faced with the prospect that there might be some kind of gap in their knowledge (they turn beet red). I’d argue that the redder you turn, the less holistically defective you are when it comes to realistic self assessment.

We can pretty much set aside Master Beginners; these are seriously demented individuals that will be equally insufferable in all theaters. Company men are probably not far behind since they let their narrative be written as they go, with each instance of them not being taken down a peg bolstering their self confidence, however unjustifiably. So, even if they start out reasonably, after a bunch of years of “moving up by merit” they probably assume that they’re simply becoming awesome at everything. That leaves us with poor Xenophobe, who leads a high stress life, constantly on the brink of being exposed.

And this, I would argue, is the counter-example. Xenophobe is what happens if, while our karaoke singer is ‘performing’ on stage, someone comes along and says, “hey, I’m a musical talent agent and, while I’ve never heard anyone sing before, I’m sure that you’re just what we need, so here’s a few million dollars and some fame!” The stakes are high, the pot is sweet, and the dream is tantalizing, so our singer inks the contract, silences the “this is too good to be true” voice and engages in an odd dance that can only be described as, “make it then fake it.”

If we go away from the singer metaphor and into the more realistic scenario of “amateur techie at small, but growing, company,” you (might) start out with a decent, if naive, person that takes the road less advised when faced with “too good to be true.” And once that decision is made, it gets harder and harder with each passing day to go back, until you’re haggard somewhere, in an office, shrieking at junior developers that you don’t want to hear another word about this functional programming crap!

I’d imagine that this type of Expert Beginner, having arrived at the path described here, could actually be pretty reasonable in other areas of life. Sure, he must have some capacity for self-delusion, but can any of us honestly say that we don’t — that we haven’t indulged in basking in blatant flattery from time to time? I’m not saying that we could all make a lifetime of it, but what I am saying is that I think there’s a narrow cadre of expert beginners out there that might be decent people and even relatively modest in other areas of life.

And how do you call the guy who uses 10 patterns from the GOF bible to add two integers ?

I’d probably call him Thor (https://www.daedtech.com/the-code-warriors — at the bottom)

If you’re that ignorant about karaoke, why take you seriously about anything else?

I suppose I’ll have to abandon my plans to start a karaoke blog with you as the number 1 fan.

I’m just playing around, but people really do enjoy karaoke, and some people really are good at it. I know it’s 100% horrible every single time on TV, but I feel compelled to defend the honorable institution of karaoke from the vicious slander it receives in mass media. If not now, when? If not us, then who?

When I think of karaoke, I think of all the different bars I’ve been in where it’s going on. Usually there’s a mix of people. Some of them are really good, but it always seems like invariably there’s one person who thinks that he’s Marvin Gaye (or thinks that she’s Mariah Carey or whatever) and it’s just brutal.

Though I was a bar a number of years ago and the karaoke there was no joke. There was some kind of crew there that each did one of the Rat Pack, and they were GOOD.