Get Fed Up Every Now and Then

Category: The Life of a Programmer Tags: Miscellaneous, Self Improvement | 7 Comments

In SQL Server management studio, all of objects in the database are listed in the object explorer in the format [schema].[object]. In large databases of the legacy variety, it’s not uncommon to find that the only schema for application tables/views/sprocs is dbo. In this case, navigating to the object you want requires the infuriating step of typing “dbo.” before the table name. This may not seem like a big deal, but you have to type fast for that style of navigation, and typing that period, far from home row, creates a problem. This has annoyed me for years, but today, I’d had enough.

With a few minutes of googling, I found this Q&A exchange. Clearly others feel the same way and while I don’t consider that to be ideal, it’s certainly an improvement over what I was doing. I can hit “F7” on a folder and bring up an “object explorer” window that lets me search by object name alone because it separates schema as a different column. Win. Sort of.

I have been using SQL Server Management Studio for nearly a decade and I never knew this. But, after a few minutes with google, now I know. Sometimes it’s google, sometimes it’s a tweet, sometimes it’s asking a coworker. But, the common thread is that one day I just say “enough” and decide to do something about it. It might not be a total solution, but I decide right then and there that the situation and my life need to be improved somehow, immediately.

I think this is a pretty valuable activity. Obviously, you pick up new tips and tricks this way, but more subtly, you’re embracing a philosophy that your routines and habits can always be improved and you’re mentally setting an expiration date on mindless, sub-optimal, or obtuse activities. In a way, this is fairly agile (using lower case a in a nod to the recent blogosphere brouhaha over “taking back agile” — I just mean it’s predicated upon the idea of iterative, steady progress). You’re not paralyzing yourself by analysis to figure out the best way to do things up front all of the time, but rather leaving yourself open to the possibility (certainty) that you can improve the way you do things. 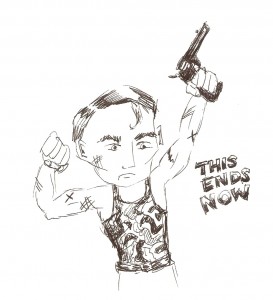 So pick something. Today. Pick something that’s a minor irritant that you’ve simply put up with for a long time and say to yourself, “This. Ends. Now.” in a dramatic, action hero voice. Spend a few minutes doing research and I’d imagine you’re going to be happy. I’ve personally never regretted anything about this time investment except for the regret that I didn’t allow myself to get fed up sooner. So, go ahead. You don’t have to take it anymore.