Discoverability Instead of Training and Manuals

Documentation and Training as Failures

Some time back, I was listening to someone explain the finer points of various code that he had written when he lamented the lack of documentation and training available for prospective users of this code. I thought to myself rather blithely and flippantly, “why – just write the code so that documenting it and training people to use it aren’t necessary.” I attributed this to being in a peevish mood or something, but reflecting on this later, I thought earnestly, “snarky Erik is actually right about this.”

Think about the way software development generally goes, especially if you’re developing code to server as a framework or utility for teammates and other developers. You start off with clean code and good intentions and you hammer away at making some functional software. Often things go well, but here and there you hit snags and you do a bit of duct-taping and work-around-ing (working around?), vowing to return later to straighten things out. Sometimes you do just that, but other times you realize that time and budget are finite resources for the effort and you reconcile with shipping something that’s not quite perfect.

But you don’t just ship something imperfect, because you’re diligent and responsible. What do you do instead? You go into those nasty areas of the code and you write inline comments, possibly containing apologies. You make sure that the XML/Java doc comments above the methods/classes are quite thorough as well and, for good measure, you probably even writeup some kind of manual or Word document, perhaps with a Visio diagram. Where the code is clear, you let it speak for itself and where it’s less than clear, you document.

We could put this another, perhaps more blunt way: “we generally try to write clean code and we document when we fail to do so.” We might reasonably think of documentation as something that we do when our work and intentions fail to speak for themselves. This seems a bit iconoclast in the face of conventional methods of communicating and processing information. I grew up as a programmer reading through the “man pages” to understand all manner of *Nix command line utilities, system calls, etc. I learned the nitty-gritty of how concepts like semaphores, and IPC and threading worked in this fashion so it seems a bit blasphemous, even to me, to accuse the authors of these APIs at failing to be clear or, really, failing in any way.

And yet, here we are. To be clear, I don’t think that writing code for which clients need to read manuals is a failure of design or of correctness or of a project or utility on the whole. But I do think it’s a failure to write self documenting code. And I think that for decades, we’ve had a culture in which this wasn’t viewed as a failure of any kind. What are we chided to do when we get a new appliance or gadget? Well, read the manual. There’s even an iconic acronym of exasperation for people who don’t do so prior to asking questions: RTFM. In the interest of keeping the blog’s PG rating, I won’t say here what it stands for. In this culture, the engineering particulars and internal mechanisms of things have been viewed as unknowable mysteries and the means by which communication is offered and understanding reached is large and often formidable manuals with dozens of pages of appendices, notes, and works cited. But is that really the best way to do things in all cases? Aren’t there times where it might be a lot better to make something that screamed how it should be used instead of wasting precious time? 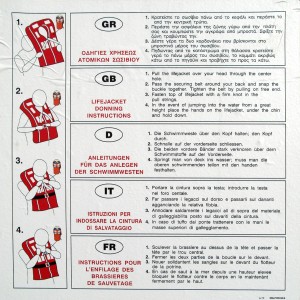 An interesting thing has happened in recent years, spurred on largely by Apple, initially, and now I’d say by the mobile computing movement in general, since Google and Microsoft have followed suit in their designs. Apple made it cool to toss the manual and assume that it is the responsibility of the maker of the thing, rather than the user, to ensure that understanding is reached. In the development world, champions of clean, self-documenting code have existed prior to whatever Apple might have been doing in the popular market, but the concept certainly got a large, public boost from Apple and its marketing cachet and those who subsequently got on board with the movement.

Look at the current state of applications being written. This fall, I had the privilege of attending That Conference, Dotnet Rocks Edition and seeing Lwin Maung speak about mobile concepts and the then soon-to-be-released Windows 8 and its app ecosystem. One of the themes of the talk was how apps informed you of how to use them in intuitive ways. You didn’t read a manual to know that the news app had additional content — it told you by leaving the next story link halfway off the side of the screen, practically begging you to paw at it and scroll to the side. The idea of Windows with lots of headers at the top from which you can drill hierarchically into the application is gone and being replaced instead by visual cues that are borderline impossible to screw up.

As this becomes popular in terms of user experience, I submit that it should also become popular with software development. If you find yourself writing some method with the signature DoStuff(bool, bool, int, bool, string, bool) you’ll probably (hopefully) think “man, I better document this because no one will ever figure it out.” But I ask you to take it a step further. If you have the time to document it, then why not spend that time fixing it instead of explaining yourself through documentation? Rename DoStuff to describe exactly what stuff it does, make the parameters significantly fewer, get rid of the Booleans, and make it something that’s pretty much impossible to misunderstand, like string.RemoveCharactersFromTheEnd(6). I bet you don’t need multiple appendices or even a manual to figure out what that does.

Please note that I’m not suggesting that we toss out all previous ways of doing things or stop documenting altogether. Documentation certainly has a time and a place and not all products or APIs are ones that lend themselves to being completely discoverable. What I am suggesting is that we change our culture as developers from “RTFM!!!!” to “could I have made that clearer?” We’ve come a long way as the discipline of programming matures and we have more and more stakeholders who are less and less technical depending on us for more and more things. Communication is increasingly important and communication on clear, broadly understandable terms at that. You’re no longer writing methods being consumed by a handful of fellow geeks that are using your code to put together a BBS about how to program in COBOL. You’re no longer writing code where each byte of memory and disk space is precious so it’s far better to be verbose in voluminous manuals than method or variable names. You’re (for the most part) no longer writing code where optimizing a few cycles trumps readability. You’re writing code in a time when terms like “agile” and “maintainable” reign supreme, there’s no real cost to self-describing code, and the broader popular in general expect their technology to be discoverable. It’s a great time to be a developer — embrace it.