Category: The Life of a Programmer Tags: Intoversion | 9 Comments

There’s a common tale I hear that seems to epitomize being adrift in a sea of corporate anonymity. It is some variant on the theme that people are using asynchronous communication media when actually (to their knowledge or not) seated pretty close to one another. At its most facepalm, it’s perhaps two people who sit within 20 feet of one another dialing into a webex for a scheduled meeting between the two of them. But at its most deceptively understandable, it’s two people in a similar situation exchanging emails.

“Just get up and talk to each other!” exclaims an exasperated witness to the exchange.

In the case of the webex, the communication barrier seems legitimately hard to justify.  It’s like calling someone in the next room to watch TV together or something.  But in the case of email, I can offer justification, though perhaps not the justification you might think.  I’ll circle back around to this. 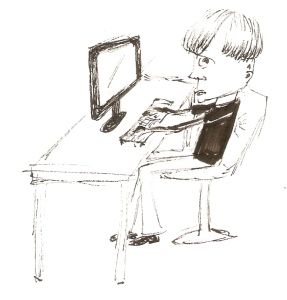 I’ve written a few posts on the subject of introversion over the last few years, including this first one that was relatively popular.  In response to these posts, I’ve gotten some recommendations to purchase Susan Cain’s “Quiet: The Power of Introverts in a World that Can’t Stop Talking.”  Her audio book now resides on my phone and I’m listening to it as I travel.  It’s worth a listen/read, and I’m definitely going to be writing more on this topic, particularly as I wrestle with the friction that has been created by making extroversion the new hotness in the programming world.

The book has offered an explanation of my own psyche that is downright eerie in how well it describes me.  Introversion, apparently is marked by a good bit more than just needing alone time to “recharge one’s batteries” after spending time in social situations.  Here are the themes from my post that Cain predicts of introverts (and, this apparently describes me quite well, as I got a 20 out of 20 on the informal “are you an introvert” quiz near the beginning).

That last one is kind of interesting, eh?  An introvert will tend to favor the written word as a means of communicating ideas. END_OF_DOCUMENT_TOKEN_TO_BE_REPLACED