Reaching back into my C++ days, a concept exists called “inline”. “Suggesting inline” is a concept where you tell the C++ compiler that you want to dispense with function call overhead and slam the code in question right into the code stream of the caller. (It’s a matter of suggesting because the compiler might ignore this request during its optimization such as if you decide to rip a hole in space-time by suggesting inline on a recursive method). So, for instance:

is effectively transformed into:

This is conceptually similar to the concept of macros in C/C++. The idea is simple — you may have some block of code that you want to abstract out for reuse or readability, but you’d prefer the performance to mimick what would happen if you just wrote the code right in the method in question. You want to have your cake and to eat it too. Understandable — I mean, who doesn’t and what’s the point of having cake if you can’t eat it?

In the .NET world of managed languages, we don’t have this concept. It wouldn’t make any sense anyway as our builds generate byte code, which is processor-agnostic. The actual object code is going to be a matter between the runtime and the OS. So we don’t see the option for inline in the sense of runtime performance. 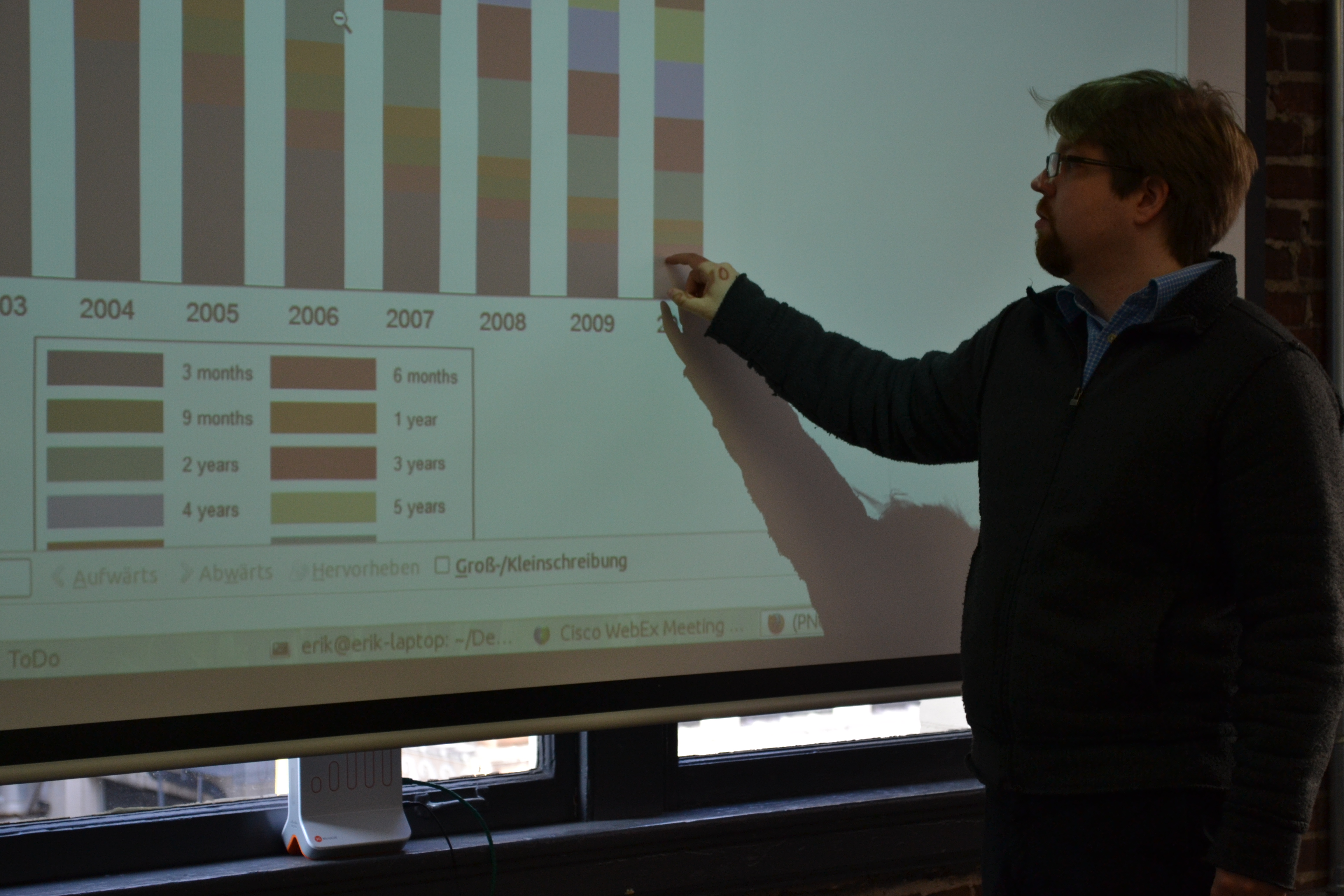 One of the metrics in OOP that I think is a generally fair one is lines of code as a liability. If you have a 20-100 line class then life is good, but as you start creeping toward 300 lines it starts to smell. If it’s over 500 lines, kill it with fire (or, break it up into reasonable classes). The reason for this is a nod toward the Single Responsibility Principle and the concept of code smell. There’s nothing inherently wrong with large classes, per se, but they’re almost always an indication that a bunch of responsibilities are all knotted together in one tightly coupled mess. The same goes for methods on a smaller scale and with smaller scope of responsibility.

So, your personal preferences (and mine) about class/method size notwithstanding, it bears mentioning that smaller and more focused is generally considered better. The result of this is that it’s fairly common to evaluate class and method sizes with fellow developers and see people getting antsy as sizes get larger. On the flip side, it’s common to see people feel good when they keep class sizes small and to feel particularly good when they slay some hulking 5000 line beast and see it divided up into 20 more reasonably sized classes.

Another fairly common metric that I like is the number of parameters passed to a method. Like lines of code and large method/class, parameters trend toward code smell. No parameters is great, one is fine, two is a little noisy, and three is pushing it. More than that and you’ve written a method I want nothing to do with. I think a lot of people feel this way in terms of code they write and almost everyone feels this way when they’re a client (if a method has a bunch of parameters, good luck figuring out how to use it). This is true not only because it’s hard to keep all of the parameters straight but also because a method that needs a whole bunch of things to do its job is likely doing too large a job or too many jobs.

We like our methods/classes small and our parameter lists short.

Static and New: Gaming the System

One way to accomplish these goals is to ensure that your scopes are well defined, factored, and focused. But, if you don’t feel like doing that, you can cheat. If, for instance, you come across a constructor that takes 5 dependency parameters, the best thing to do would be to rework the object graph to have a more cohesive class that needed fewer dependencies. But, if time is short, you can just kick the pile of debris under the bed by having the constructor reach out into the static universe and pull its dependencies from the ether. Now your class has the cologne of a blissfully simple constructor hiding its dependnecy smell, thanks to some static or singleton access. The same thing can be applied with the “new” keyword. If you don’t want to rip holes in the fabric of your object graph with static state and functionality, you can always instantiate your own dependencies to keep that constructor looking slim (this would be identical in concept to having a stateless static factory method).

This trick also applies to cutting down lines of code. If you have a gigantic class, you could always port out some of its state and behavior out into a static class with static state or to an instance class spun up by the beast in question. In either case, lines of code goes down and arguments to public APIs stays the same.

Let’s say that we thought that GetTotal method looked way too long and we wanted to shorten it by kicking parts of it under the bed when company came by to look at the class. What about this:

This is fewer lines of code, to be sure. We’ve created a static Utils class that handles the dirty work of getting the running sum of all numbers up to and including a given number and we’ve delegated the work to this class. Not bad — we’ve eliminated 5 lines of code from both Foo and GetTotal(). And RunningSum is stateless, so there’s no worry about the kind of weird behavior and dependencies that you get from static state. This is a good thing, right?

Well, no, not really. I’d argue that this is fool’s gold in terms of our metrics. In a very real conceptual sense, Foo has no fewer lines of code than it initially did. Sure, from the perspective of organizing code it does — I’ve separated the concern of RunningSum from Foo’s GetTotal and we might make an argument that this factoring is a good thing (it’d be more interesting in a less trivial example). But from the perspective of coupling in the object graph, I’ve done exactly nothing.

And that’s my larger point here. When your code invokes a static method or instantiates an object, client code calling your stuff has no choice in the matter. If I’m calling Foo’s GetTotal() method, it doesn’t make any difference to me if you call Utils.RunningSum() or just do the work yourself. It’s not as though I have any say in the matter. It’s not as though I can specify a strategy for computing the sum myself.

Now, by contrast, consider this:

Here I have a method that allows me to specify a number and a strategy for totals computing and it returns the computed total. Is this like inline? No, of course not — as the client, I have a lot of control here. Foo isn’t inlining anything because it needs me to specify the strategy.

But what about encapsulation? With the code in the method or abstracted to a hidden collaborator (static or new) the details of computation are hidden from me as the client whereas here they may not be (depending on where/how I got ahold of an instance that implements that interface). To that I say that it’s admittedly a tradeoff. This latter implementation is providing a seam and giving more options to client code whereas the former implementation is hiding more but leaving client code with fewer options. Assuming that any static methods involved are stateless/functional, that’s really the main consideration here – how much to cover up/hide and how much to expose.

I certainly have a preference for inversion of control and an aversion to static implementations both because of my desire for decoupled flexibility and my preference for TDD. But your mileage may vary. All I’d ask of anyone is to make informed decisions with eyes wide open. Metrics/smells like those about parameters and class/method size don’t exist in a vacuum. “Fixing” your 5000 line class by creating a static class and delegating 4800 lines of work to it behind the scenes is not reducing the size of that class in any meaningful sense, and it’s not addressing the bad smell the class creates; you’re just spraying perfume on it and hoping no one notices. The real problem isn’t simply that 5000 lines of code exist in one source file but rather that 5000 lines exist with no way to pry the dependencies apart and swap in alternate functionality.

So when you’re coding and bearing in mind certain heuristics and metrics, think of using static method calls and instantiating collaborators as what they really are — cosmetic ways to move code out of a method. The fact that the code moves to another location doesn’t automatically make it any more flexible, easier to maintain or less smelly. It’s providing additional seams and flexibility that has the effect you’re looking for.

Nice article. You are correct, it would be easier to visualize the impact with slightly less trivial examples, but you make good points, and food for thought for this self-taught guy.

Keep up the good work!

Glad you liked it — thanks for reading.

A Blog Grows Up: DaedTech Year in Review for 2012 | DaedTech