Category: The Life of a Programmer Tags: Miscellaneous, Soft Skills

I had some grand plans this week to do a Chess TDD post and a reader question post, but I wound up agreeing to do a quick contract gig that was very time sensitive, so I’ve been coding furiously all week, logging 50 billable hours in 4 days and still going strong.  That’s why, instead of any of my best laid plans, I offered cross posts.  Ah well, it turns out the cross posts tend to be quite popular, so I suppose everyone wins.

Given that I’m tired from all of this work and just kind of freewheeling a bit here, I’ll just type extemporaneously (or as close to that as you can manage with typing).  It’s been a while since I just typed what was on my mind in a stream without structure, so this is kind of fun.  This is a topic that’s bubbled near the surface for some years, but never quite made it into a post.  I’d like to talk about what people do in professional situations with a high degree of ambiguity.  This comes up a lot, often during transitional situations for groups or organizations.

To be a little more concrete about it, let’s say that you’re part of a team that’s just delivered a multi-year project, and it’s time to figure out what’s next for you as a group.  There’s an idea that, while the C-levels figure out the next long-term play, your team will spend a few months “cleaning up” an internal, legacy app.  What “cleaning up” means is yet to be determined.

At this point, all you know is that you’re going to do stuff to this application.  This lack of specifics is the ambiguity to which I’m referring.

Watching how people react in a situation like this is interesting.  Sure, at some point, circumstance will squeeze specifics out of some reluctant manager and the team will have their marching orders, but until that happens, you can witness a small study in human psychology.

Some people will interpret this situation as either quasi-time off, or else as unplanned “20% time,” triggering a period of some degree of coasting.  They’ll bone up on general knowledge, work on a little project they’ve always thought the company could use, work on a side project of their own, or maybe even just spend all day on Facebook.  The common theme here is that they’re content to wait for more specifics before proceeding.

Other people will fill the ambiguity with virtuous specifics according to their own office ethos.  I think of this as “sharpening the pencils,” and it’s usually accompanied by a crisp, earnest, and slightly urgent, “alright. come on, guys, let’s all {sharpen the pencils}.”   For some people, this means filling in the void with comfortable structure.  “Let’s decide who is going to be the liaison, the project manager, etc.”  For others, it’s haggling over tools of the trade — “alright, well, I think we should use that new text editor and it might make sense to update this code base to node.”  For others, it may simply be “time to lean, time to clean” activities, like “we don’t know what we need to do, but it couldn’t hurt for us to get started adding comments to every method in this thing.”

I call this “sharpening the pencils” because in my mind, it can be crystallized to this image.  “Well, we don’t know exactly what’s coming, but it can’t hurt to greet it with pencils sharp, ready and willing to take notes and get started on whatever comes!” 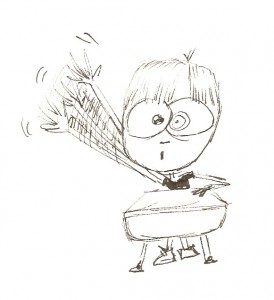 In my opinion, one of these camps is decidedly the ‘right’ camp, and it’s the former.  No, I didn’t confuse directional words.  I think the non-pencil sharpening loafers are doing the right thing, both for themselves and for the business.  And it’s not because I find “let’s all sharpen pencils” enthusiasm to be hard to take (though that can be the case).  It’s a lot more pragmatic than that.

But first, let me impress upon you the degree to which the corporate condition encourages us to confuse activity with productivity.  You’d be hard pressed to disagree that the key to corporate advancement is to look busy for as many hours of the day (and night) as humanly possible.  It’s not that people don’t care about competence, but rather that it’s extremely difficult to measure the competence (let alone value) of a single human cog within the large corporate organism.  And so instead, people look to behavioral proxies that they think make sense.

In many positions, the path to creating obvious organizational value is extremely opaque.  It’s not as though the typical wage worker is empowered to go out and single-handedly land and deliver to major clients.  And so they’re left, within the relatively narrow confines of their responsibility sets, to distinguish themselves however they can.  And, generally, this involves completing all assigned tasks with competence and alacrity and filling any down time with highly visible pencil sharpening.

At this point, I realize my case is yet to be obvious.  After all, I’m dumping on “for the good of the company”-spirited enthusiasm and ambitiously jockeying for promotion.  So, what gives?

Well, quite simply, pencil sharpening is value theater.  It’s what you do when you don’t have anything useful to do, and it’s how people evaluate you when they don’t have any meaningful way to evaluate you.  Like getting a rewards card at a fast food joint, you and the establishment can both delight in your consumption of empty calories without a general benefit to society.

I firmly believe that, for anything you’re doing with an aim to be productive, you should be able to articulate why you’re doing it in the context of a goal.  But, I’ll add a bit more specificity to it.  You should be able to articulate the done criteria for the goal toward which you’re working.  If you can do this, it’s a business venture — if not, you’re killing time.

Let’s return now to the example of the team tasked with “cleaning up the legacy app.”  Is there a goal?  Sure, sort of.  “Cleaning up the legacy app” is a goal of sorts.  Is there any sort of done or success criterion?  Absolutely not.  Ergo, by the framework I’m proposing, everything anyone does on this ‘project’ is killing time until some actual success conditions show up.

Sure, you can decide on who has what role.  You can pick an IDE and some technologies to use.  You can setup a few weekly status meetings and decide on a release cadence.  Heck, you can even schedule an all-hands team building exercise.  These are all industrious ways to kill time.  They’re all pencil sharpening.  And they are all, thus, insidious. You can hum along for weeks at a time, busily doing stuff that offers zero value to anyone, all the while seeming to accomplish a lot.  The most vocal and tireless in this pursuit will probably even grow their leadership cred in the process.

But is that really what the organization wants?  People sharpening pencils for notes that may never need to be taken?  People working up an impressive lather digging holes out front and then filling them back in?

It is for this reason that I say that the checked out people working on their own stuff actually have it right.  They’re not pretending to be productive at something useless.  Rather, they’re embracing the reality that, without some clarity, the only things at which they can be productive are their own projects, for which they have both goals and success criteria.  They’re taking a fail fast approach by surfacing the organization’s lack of coherent direction.

The next time you feel the impulse to fill a pocket of ambiguity with a flurry of activity, I’d ask you to consider this line of thinking.  Do you know what you’re working toward?  If not, are you helping define what you should be working toward?  Or are you just filling your day with empty organizational calories and indulging yourself in the illusion of progress?

Eric, thank you for an insightful post! This is another one of those office situations which I’ve seen in a few different jobs, but couldn’t quite articulate until now. Though, it seems to me that the biggest damage done by the pencil-sharpening approach isn’t that pencil-sharpening projects are entirely useless, but that it further entrenches an office culture where “looking busy” is valued higher than actual accomplishment. And I’m becoming more and more convinced that looking busy and being productive are not merely orthogonal, but are actively opposed to each other.

Agreed on the cultural entrenchment problem. And I think you’re right, the pencil sharpening projects aren’t necessarily useless, though I’d argue that a lot of them wind up being useless (e.g. migrating some legacy system to new version control, only to find out that management decided to cut bait and bring in a COTS product or something).

I’d be interested to hear more on your hypothesis about looking busy and being productive as opposing goals. I’m intrigued.