How to Prepare for Windows 8.1 Update Fail

I was going to publish the next Chess TDD post today, but I got caught up in the worst kind of yak-shaving where I was basically just trying to get my computer functional again. So, I didn’t get the audio recorded, and I have something different to talk about, to-boot.

Last night, I stayed up late programming and left my computer on. This morning, I got up and it had powered off for some reason or another. When I turned it on, it told me that it was installing updates. Whatever, new OS (for me), same difference on the updates. Except, this time it got to 99% installed, stayed there for a really long time, and then eventually came back with the message:

I let this go for around 45 minutes before figuring there must be something wrong. I did a hard reset, and it booted right back into that screen. Tried again, same result. Let it go for another half hour, nothing. At this point, I tried to boot into safe mode, but there are apparently six different ways to do it and three of them don’t work because Windows 8 is too fast or something. It appeared as though the only way to boot into safe mode was to launch the OS normally and enable it. Sigh.

I figured I could boot from some kind of media, but none shipped with the PC. I figured I could make one, but all of the guides about making Windows 8 recovery CDs/USB Drives all seemed to start with “boot into Windows 8 and…” Double sigh. So, pretty much everything you might do to recover the machine in light of an unexpected problem involves you having prepared ahead of time for such a problem. And, while it’s certainly good practice to do so, it hadn’t occurred to me that the source of instability would be an OS update. And, apparently, it’s a common problem with this update that has yet to be fully resolved for everyone.

To solve my problem, I eventually managed to mash F8 at just the right time, get the advanced startup menu, and find a restore point that had been set yesterday morning. After wasting a couple of hours of my life, I’m going to take steps to prevent this kind of nonsense and minimize headaches. If you’re running Windows 8.1, I’d suggest that you follow some of these relatively quick steps. They’ll take you little time and, since these updates seem rather issue-prone, they might save you a huge headache later.

So here’s what I’m doing.

The last thing I want is to go to bed tonight and have a repeat of this morning. If updates are going to be a source of problems, I want to be opting into them instead of having them pushed. To do that, go to the start screen and type “Windows Update,” which will return the Windows Update menu. Go to “Change Settings” and you can choose a less aggressive setting. I chose “check for updates but let me choose whether to download and install them.” 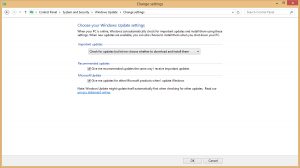 YMMV on how you want to handle this, but it might be a good idea if you don’t want some update bombing out and costing you a couple of hours.

Make Sure Safe Mode is Accessible

I lucked out in that I was able to get into safe mode, but having that be a crapshoot is silly (and, in my opinion, should absolutely not be the default setting). Here’s a guide for how to do this. You basically have to run a command line utility to make it happen. It might marginally slow down your boot. Whatever, this is a no-brainer, and shaving a few seconds off of boot time at the risk of not being able to launch the OS in safe mode is completely not worth it.

Here are instructions for doing this. I haven’t actually done this one yet, but I’ve ordered a USB drive for the purpose and will do it when it gets here. It never hurts to have options and since my computer didn’t ship with an OS disk, I think this is something I should have.

Here is an alternative method if you’d prefer to use a DVD.

Windows 8 has a refresh feature that will basically reinstall the OS while leaving your files and Metro apps alone. However, it will blow away your installed applications, which is a bummer. You can create your own refresh image that will include the things you’ve installed, though. Instructions for that are here. I believe you’ll still have to reconfigure your applications when you launch them, but it’s better than nothing.

It probably never hurts to create system restore points to recover to (and you can actually use them if you do the F8 enabling). But, given the trouble with system updates, it might make sense to create them immediately prior to trying an update. Here’s a “dummy’s guide” if you’re so inclined, but if you just type “restore point” at the start screen, you can probably figure it out from there.

Remove any extraneous things plugged in

After I had started writing this post, I continued to try to update because I needed to upgrade to Windows 8.1 Pro and because I wanted the problem solved. In the end, I wound up doing a complete “refresh” and then unplugging various things from the USB ports, including a Fitbit and my USB web cam. After these steps were taken together, I was finally able to get through the offending update. I can’t say for sure, but I suspect the latter cause, particularly because at one point I’d found a blurb about someone having the same experience.

So as a good troubleshooting step, you might consider ripping out everything not strictly necessary (and perhaps disabling various applications that startup at boot and anything else not necessary).

An ounce of prevention is worth a pound of cure… I learned the hard way, today. Hopefully this saves you some headaches, particularly if Microsoft belches out a problematic but ‘mandatory’ system update. I encourage you to do some of these things (at the very least, make sure you can run the OS in safe mode when it’s not critical) now before you’re panicked or furious.

Yeah, Windows 8… When I was setting up my new Windows 8 laptop I installed Skype. It insisted that I could not use my old Skype account and that I had to create a new Microsoft account. I did this and dutifully generated a password with KeePass. Then I rebooted my computer and found out that my *local user account* had been replaced with this new Skype/Microsoft monstrosity. Only problem was that I didn’t know the password – it was in KeePass. Safe mode? Never managed to figure how to use it without also knowing the password. I had to… Read more »

Erik Dietrich
Reply to  A

Sounds strikingly similar to how I felt, spending all day hunting down cryptic error messages only to discover that the OS can’t update itself if some random device is plugged into a USB port. Our stories are huge violations of “principle of least surprise.”

I was quite upset at the time, but now I realize how lucky I was that it *did* finish.

Yep. I’d have taken that tradeoff the other day.

After drinking the continuous deployment kool-aid for production machines I now consider development machines expendable and replaceable in the same manner. While the options you list above are great because they’ll get you back up and running fast and minimise the risk of data loss, I now build my development machines using a combination of PowerShell and Chocolatey. The advantage of this approach is that I can build multiple similar machines (e.g. at work and home) and can rebuild from scratch every time a new version of Windows comes out. I just run a PowerShell one-liner that downloads a script… Read more »

It’s funny — both initially when I was installing my software and when I was re-installing it, I considered setting myself up with Chocolatey. But, counter to my own wisdom ( https://www.daedtech.com/get-fed-up-every-now-and-then ), I opted to skip it, thinking, “meh, I’ll do it next time.” I think you’re absolutely right about your approach being the best way to go. I remember working in a shop a while back where there were ISO images for dev machines, but what you’re talking about is a lot better since you have the ability to have the latest bits for your applications at all… Read more »

Honestly, I have had similar problems… Tried to get support for windows 8.1 for 6 hours. Went through 5 help staff with differing opinions, got hung up on, the lot. Turns out they could only help with one thing, MY REFUND. turns out downloading and installing “cracked” software took only an hour and work awesome. TPB has better support than microsoft it would seem.

Depressing to think about, indeed. It’s a sad state of affairs when a customer willing to *pay* for a product walks away from that paid product due to execution failures.

Windows 8 is only windows that updates aare more during using web use , we should turn off and all describe well in your artile thabks for proding a nice infofo

having exact same issue with windows 10 update. ssd make windows boot so fast its hard to get into safe mode.

I think if you know the right key for BIOS/safe mode, you can just hold it down as the machine powers on. Mercifully, I haven’t had problems like this with any of my Win10 devices.