Enough with the IoT Naysaying Already

In terms of the vibe that radiates from this blog, I try to maintain a healthy mix of optimism and cynicism. “How to” and explanatory posts tend to be optimistic in nature, offering you a “hey, we can all do this” appeal. On the flip side, some of my most popular posts tend to be populist, cynical rants about corporate culture and office politics. I suspect they’re popular because of a shared catharsis that we can all experience together. Frustrated people love a good rant.

Today, I’d like to mix it up a little by offering what I believe will be an optimistic rant. I suspect that’s not something you see every day.

The subject of my ire, at the moment, is the now-ubiquitous skepticism about the so-called “Internet of Things.”   I’ll allow that some of this probably has to do with buzzword fatigue and the cloying sound of marketing types saying, “dudebros, tomorrow’s chief digital officers are gonna IoT it up with some Raspberry Pis and rock out with some quadcopters!” That sort of thing will bring out the cynicism in any domain expert.

But I think it runs a little deeper than that and into a very selective form of quasi-Ludditism. Luddites are people who rail against new technology as if it were the bane of their existence, and no one in my feeds is doing that. But what I see instead, and what I’m calling “quasi-Ludditism,” is greeting the prospect of progress as if it were a gimmick with a failure guarantee. 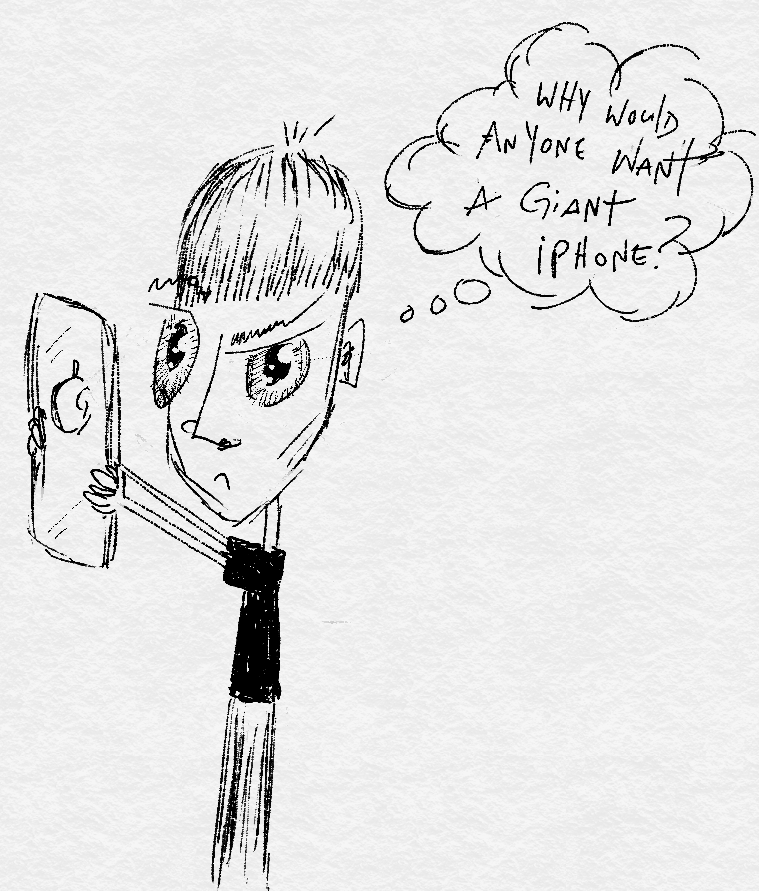 Remember in 2010, when Apple’s stupid new form factor was a terrible idea and would obviously fail?

To be concrete about this, I recently saw a Tweet (can’t find it now, unfortunately) that lambasted an electronics company for putting a camera inside of a smart fridge. In response, seemingly dozens of techie folks chimed in, with witty variants of “awesome, I can watch my cheese go bad.” The group consensus seemed to be that a camera in the fridge was so gimmicky – so, in fact, stupid – that there was no need to rail against it because it would fall flatly and comically on its face.

And there I sat thinking, “here’ s a use case I dreamed up in literally 3 seconds: you’re at the convenience store picking up a few things and you can’t remember if you’re out of milk or not. Old way: call your significant other and hope they’re home to ask. New way, find out in a few seconds by looking at your fridge’s contents.”

The fridge is a popular target. I remember similar lambasting occurring a year or two ago where people had fun with the absurdity of a fridge that could send text messages or tweet. Similarly, in that instance, there was high amusement with barbs like, “yeah, now we can automate boring everyone on social media with our food.”

And there I sat, thinking, “here’s a use case I dreamed up in literally 3 seconds: you get a text message saying, ‘the fridge door has been open for 5 minutes now, so you may want to check that it was left open accidentally.’ Old way: you get home to find your food spoiled. New way: you don’t.”

But what I find puzzling isn’t that people are thinking, “what would I need with a newfangled doo-dad that has a camera when my perfectly good current doo-dad does what it needs and get off my lawn and kids these days.” What I find puzzling is that techies seem to dominate this fist shaking (at least in my feed, which, I admit, may suffer from sampling bias). 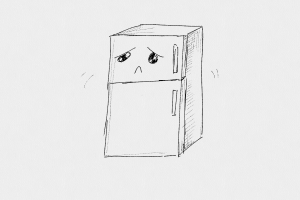 Why is it that the segment of society upon whose shoulders the burden of innovation falls seems to be saying, “that’s new and new things are stupid!” Doesn’t that seem somehow troubling?

I’m not suggesting that any idea of “let’s tack X onto Y” is a good one that should be given consideration and air time. If that were true, Sky Mall would still remain a thriving channel for the purchase of curios. There are bad ideas and lots of them. There is also stupid marketing and lots of it.

What I am suggesting is that we stop letting the existence of bad ideas and cheesy marketing hanger-ons color our default response to ideas. I am suggesting that perhaps you shouldn’t be reflexively ridiculing something as useless when I can effortlessly think of a practical use for it in seconds. Though it’d be pleasant to believe otherwise, I am simply not that divergent of a thinker.

You’re absolutely right that this behavior is pervasive in our profession, although I wouldnt chalk it up to Anti-Ludditism so much as I would the curious social awkwardness of developers. At the risk of beating an old stereotype, I think developers (myself included) sometimes embrace the Cult of the Snark because they think it makes them sound more experienced, cooler, funnier, and less cow-eyed. In some ways, developers aren’t that far removed from mean middle school girls.

I think that’s a good point and probably describes the motivation for someone of what I see. I’d be lying if I said I didn’t have to stop myself from reacting this way in the face of certain new things that I don’t understand. And, I think it’s a pretty universal reaction to, say, teenager music.

I think as the IoT arena matures — because the bar is so low that pretty much anything can be cobbled together quite easily — we’ll get more useful products. Right now, people like me are sitting on the side lines thinking, “Well, that looks like a solution looking for a problem.” Not all of these things are frivolous; they just seem like one-offs. Let’s put sensors on all the things and people will love it! I imagine security is another reason to be cautious. As an industry, we tend to view security is something we’ll add once the product… Read more »

I think what Gene points out below speaks to this a lot — that “put a camera in your fridge” is bad marketing (i.e. “problem in search of a solution.”) and they should be saying, “never wonder whether you’re out of milk again.”

I’ve been a hobbyist in the home automation world for a long time, so my perspective on this may be skewed — I may be predisposed to naturally mapping problems onto random solutions tossed out there.

I think the reason developers rail against the IoT idea is that we understand the costs associated with developing, and maintaining, complex, Internet-connected software. A fridge (or any other Thing in the Internet of Things) manufacturer doesn’t have the lessons learned from experience that software development isn’t something you just add to an existing product. This is doubly true for Internet-connected devices, where security should be a number one priority. The current state is similar to where we were with Smart TVs and autos in the past decade, with each manufacturer “adding” software to an existing “dumb” product. I think… Read more »

I’ve been a home automation hobbyist/enthusiast for a decade, working mainly with X10, and I definitely share/shared this concern. X10 as a protocol is a great concept, and I hoped that things would continue to develop in pluggable fashion with vendors conforming to a protocol rather than each one offering proprietary lock-in. Even in the mid 2000s, it struck me as silly that manufacturers would offer one-off kind of deals like, “this TV integrates with your cordless phone system” (or whatever). I thought, “it should be that devices expose an interface, and you can have them interact with one another… Read more »

I think we need to convert your end-of-old-man rant into a hashtag-ready acronym: “And another thing… why would anyone need a camera on their phone #aGOMLaKTD”

I seriously missed the brouhaha over the iPad form factor, which is funny to me because, as an anti-Apple-fanboy, I’m usually pretty tuned in to any critiques of Apple. But that’s just maybe because I’m also a Trekkie and have always wanted one-a-them PADD thingies.

I’ve never really been a fan of Apple things either — too much vendor lock-in for my taste. And, as a matter of fact, I remember thinking that the tablet form factor wouldn’t be particularly valuable to me (and I was right about myself — I have one, but use it only for a very narrow set of activities). But there was a lot of poo-poo-ing that I remember happening, and then it came out, people bought them, figured out uses for them, and the rest is history. (By the way, I’d love a generic old man rant hashtag to… Read more »

I can see both sides of this. The fact that the beholder has to guess at the use case tells me that either the marketing is defective (generally the buyer isn’t interested in the technology but what it can do for them) or the feature was a band-wagon bolt-on and the maker has no clue what anyone will do with it. Then there’s the issues from putting things out with insufficient thought given to things like security (the accidental remote-control Jeep being a good example of this). I’m not a Luddite so much as someone who gets really annoyed when… Read more »

This is a great point about the marketing of these things. I hadn’t stopped to consider it, but they’re definitely failing in their message if I have to think of ways the thing could add value to my life. “If life gives you lemons, make lemonade” should be a backup plan — not a “here’s some lemons!” marketing strategy 🙂

I am not one of the biggest fans of IOT, yet … Now let me qualify this statement. I think IOT is great and here to stay. The world is going there whether we like it or not. It’s not the technological challenge that bothers me. What scares the hell out of me is the total lack of security. IOT is not even in its infancy yet. There is no security to speak of. The idea of being able to control everything in your house remotely, for example, scares the hell out of me. Anyone could just walk by, use… Read more »

I think this might be another instance where my perception is somewhat skewed, due to my hobbyist pursuit of home automation. About 7 years ago now, I set up a lot of X10 stuff after purchasing my own home and I built a web server to administer it. This all happened over my home wifi and when people would ask if I planned to make it so that I could control things remotely, I had trouble understanding why I would want to make remote connection possible, given the things that this would allow a hacker to do. So, I’ve had… Read more »