A Brief History of My Teeth

When it comes to teeth, I hit the genetic jackpot. I’m pretty sure that, instead of enamel, my teeth are coated in some sort of thin layer of stone. I’ve never had a cavity and my teeth in general seem impervious to the variety of maladies that afflict other people’s teeth. So this morning, when I was at the dentist, the visit proceeded unremarkably. The hygienist scraped, prodded, and fluoridized my teeth with a quiet efficiency, leaving me free to do little but listen to the sounds of the dentist’s office. 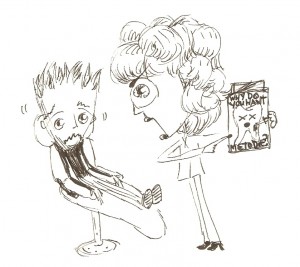 Those sounds are about as far from interesting as sounds get: the occasional hum of the HVAC, people a few rooms over exchanging obligatory inanities about the weather, coughs, etc. But for a brief period of time, the hygienist in the next station over took to scolding her patient like a child (he wasn’t). She ominously assured him that his lack of flossing would catch up to him someday, though I quietly wondered which day that would be, since he was pushing retirement age. I empathized with the poor man because I too had been seen to by that hygienist during previous visits.

The first time I encountered her a couple of years ago, she asked me if I drank much soda, to which I replied that I obviously did since my employer stocked the fridge with it for free. I don’t drink coffee, so if I want to partake in the world’s most socially acceptable upper to combat grogginess, it’s Diet Pepsi or Mountain Dew for me. She tsked at me, told me a story of some teenager whose teeth fell out because he had a soda fountain in his basement, and then handed me a brochure with pictures of people’s mouths who were apparently ravaged by soda to such a state where I imagine that the only possible remedy was a complete head transplant. My 31 year steak of complete imperviousness to cavities in spite of drinking soda was now suddenly going to end as my teeth fell inexorably from my head. That is, unless I repented my evil ways and started drinking water and occasionally tea.

I agreed to heed her advice in the way that one generally does when confronted with some sort of pushy nutjob on a mission–I pretended to humor her so that she would leave me alone. When I got home, I threw out the Pamphlet of Dental Doom and didn’t think about her for the next six months until I came back to the dentist. The first thing that she asked when I came in was whether I was still drinking a lot of soda or not. I was so dumbfounded that I didn’t have the presence of mind to lie my way out of this confrontation. I couldn’t decide whether it’d be creepier if she remembered me from six months ago and remembered that I drank a lot of soda or if she had made herself some kind of note in my file. Either way, I was in trouble. The previous time she had been looking to save the sinful, but now she was just pissed. Like the man I silently commiserated with this morning, she proceeded to spin spiteful tales of the world of pain coming my way.

Freud might have some interesting ideas about a person that likes to stick her fingers in other people’s mouths while trying to scare them, and I don’t doubt that there’s a whole host of ground for her to cover on the proverbial therapist couch, but I’ll speak to the low hanging fruit. She didn’t like that I ignored her advice. She is an expert and I am an amateur. She used her expertise to make a recommendation to me, and I promptly blew it off, which is a subtle slap in the face should an expert choose to view it that way.

It’s pretty natural to feel slighted when you offer expert advice and the recipient ignores it. This is especially true when the advice was solicited. I recall going along once with my girlfriend to help her pick out a computer and feeling irrationally irritated when we got to the store and she saw one that she liked immediately, losing complete interest in my interpretation of the finer points of processor architectures and motherboard wiring schemes. I can also recall it happening at times professionally when people solicit advice about programming, architecture, testing, tooling, etc. I’m happy–thrilled–to provide this advice. How dare anyone not take it.

But while it’s often hard to reason your way out of your feelings, it’s a matter of good discipline to reason past irrational reactions. As such, I strive not to take it personally when my advice, even when solicited, goes unheeded. It’s not personal, and I would argue it’s probably a good sign that the members of your team may be nurturing budding self-sufficiency.

In the first case, you’re either dealing with someone temporarily out of their depth or generally incompetent, who might be considered an outlier on the lower end of the spectrum. The broad middle is populated with the second case people who take marching orders well enough and are content to do just that. The third group also consists of outliers, but often high-achieving ones. Why do I say that? Well, because this group is seeking data points rather than instructions. They want to know how an expert would handle the situation, not so that they can copy the expert necessarily, but to get an idea. Members of this group generally want to blaze their own trails, though they may at times behave like the second group for expediency.

But this third group consists of tomorrow’s experts. It doesn’t matter if they succeed or fail in the moment because, hey, success is success, but you can be very sure they’ll learn from any failures and won’t repeat their mistakes. They’re learning lessons by fire and experimentation that the middle-of-the-roaders learn as cargo cult practice. And they’re not dismissing your advice to offend you–they earnestly want to understand and assimilate your expertise–but rather to learn from you.

So when this happens to you as a senior team member/architect/lead/etc., try to fight the urge to be miffed or offended and exercise some patience. Give them some rope and see what they do–they can always be reigned in later if they aren’t doing well, but it’s hard to let the rope out if you’ve extinguished their experimental and creative spirit. The last thing you want to be is some woman in a dentist’s office, getting irrationally angry that adults aren’t properly scared of the Cavity Creeps.

Yup…just the other week I replied to someone on Twitter that the surest test of maturity is to see how someone answers the question “not my way = the wrong way”.

I like that way of phrasing it. I think that definitely tells you something about a person.

Introduction to Unit Testing (Don’t Worry, Your Secret is Safe with Me) | DaedTech

(I swear, I think that the ADA pulls the licensing of any dentist that runs their office without a floss Nazi.)

That really does seem to be the case. I think you’re right.