Complain-Bragging Your Way to the Top

Category: The Life of a Programmer Tags: Miscellaneous, Office Politics

First, I’d like to make a brief aside to re-introduce Amanda Muledy (@eekitsabug) who, in addition to editing and writing, is also an artist.  Lest you think that I have a single iota of drawing talent, any sketches that you see as post illustrations are her work, done specifically for the Daedtech blog.  Her drawings are certainly better than me scrounging images from Wikimedia Commons public domain, so I’m going to be using those as graphics whenever possible.

You know what I hate? I hate it when I get caviar stains all over the leather in my brand-new, fully-loaded Porsche SUV. It’s even worse when it happens because I was distracted by all of the people emailing me to ask if I would review their code or be part of their startup or maybe just for my autograph. That really sucks. 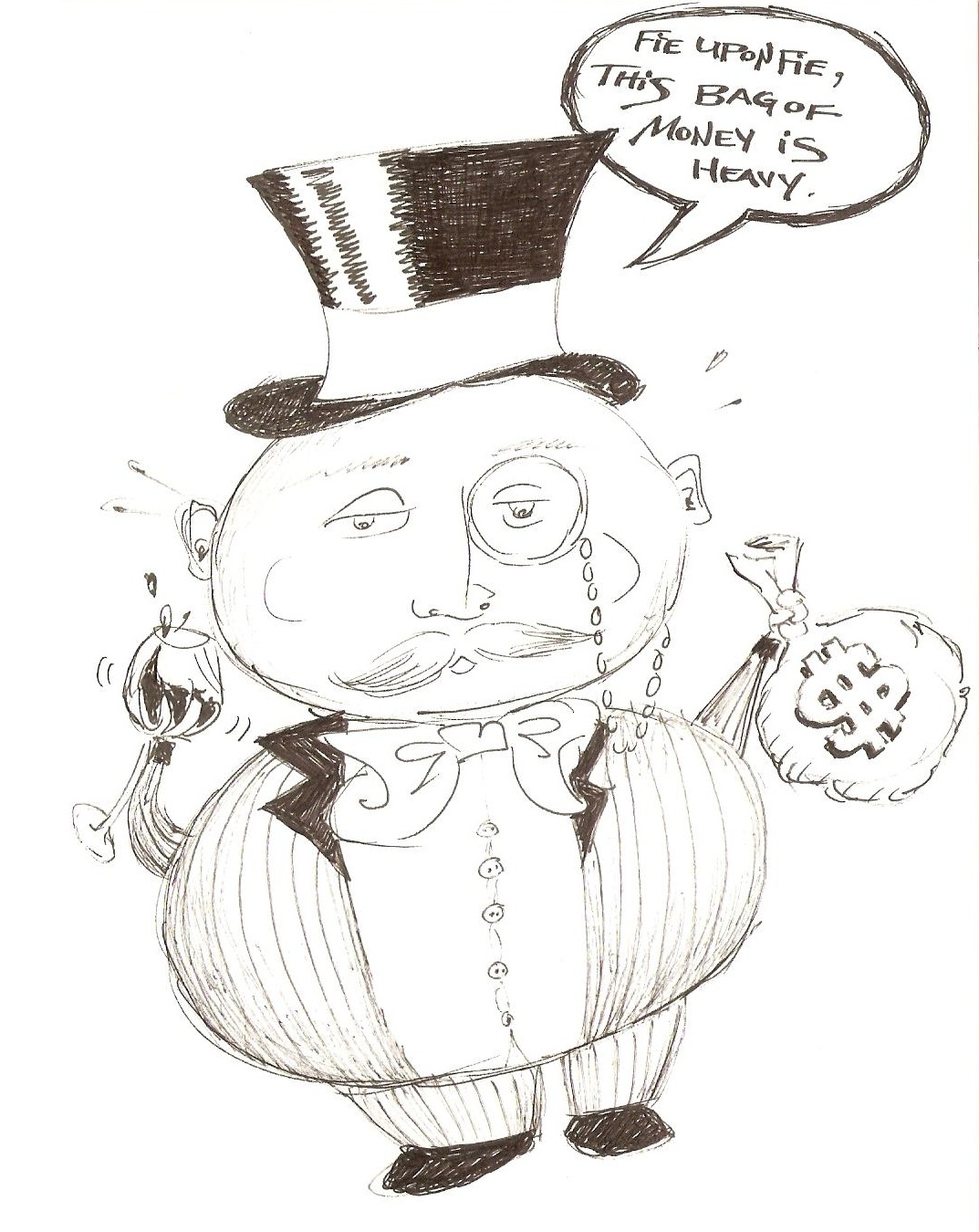 Okay, so maybe none of those things applies to me, but you know what does? Being party to people couching shameless bragging and self promotion as complaints and impositions. I hate being rich and popular because blah-blah-blah-whatever-this-part-doesn’t-matter. In case you missed it, I’m rich and I’m popular.

Surely you know someone that engages in this sort of thing. It’d be nearly impossible not to because I think just about everyone does it from time to time and to some degree or another. Most people have the interpersonal acumen to realize that simply blurting out flattering facts about oneself is somewhat distasteful. However, finding some other context in which to mention those same facts is likely to alleviate some of that distaste.  And complaining somehow seems like an easy and immediate pretext for this alternate context. (The best way would probably be to get some sympathetic plant to lob softballs at you, or else to simply wait for someone else to mention your achievements, but those are elaborate and unreliable, respectively.)

When people complain-brag, it’s most naturally in regards to some subject with which both speaker and audience are familiar. In the weightroom, a weightlifter may complain-brag about how sore he is from bench-pressing 320 pounds yesterday. In the college world, a kid may complain-brag about how badly hungover he is from pounding twenty-eight beers last night. Some subjects, such as money, popularity, and achievement, are near universal, while others, like the examples in this paragraph, are domain specific. Another domain-specific and curious example of complain-bragging that I observe quite frequently is corporate complain-bragging (or, its more innocuous cousin, excuse-bragging).

Think about the following phrases you probably hear (or utter) with regularity:

There’s an interesting power dynamic in the corporate world that came of age during the heyday of command-and-control style management via intimidation. That power dynamic is one in which managers sit in the seats of power and makers work at their behest. (For a primer on the manager/maker terminology and background on how they interact, see this wonderful post by Paul Graham.) Makers are the peons who work all day, contributing to the bottom line: factory workers, engineers, programmers, accountants… even salesmen, to an extent. Managers are the overhead personnel that supervise them. Makers spend their days making things and managers spend their days walking from one meeting room to the next, greasing the skids of communication, managing egos, adjudicating personnel decisions, and navigating company realpolitik minefields. Managers also make money, get offices, and hear “how high” when they tell the peons to jump.

It’s traditionally an enviable position, being manager, which leads many people to envy it.  And, in true fake-it-till-you-make-it style, this envy leads those same people to emulate it. So aspiring mid-level managers begin to act the part: dressing more sharply; saying things like, “synergy,” and, “proactive”; bossing other people around; and making themselves seem more manager-like, in general. And what do managers do throughout the day? Well, they shuffle around from meeting to meeting, constantly running late and having way too many emails to read. So what does someone wanting to look like a manager without looking like they’re trying to look like a manager do? Why, they complain-brag (and excuse-brag) in such a way as to mimic mid-level management. In effect, this complain-bragging, tardiness, and unresponsiveness becomes a kind of status currency within the organization with actual power capital being exchanged in games of chicken. Who can show up a few minutes late to meetings or blow off an email here and there? (Think I’m being cynical? Take a look around when your next meeting is starting late, and I’ll wager dollars to donuts that people show up in rough order of tenure/power/seniority, from most peon to most important.)

So what’s my point with all this? Believe it or not, this isn’t a tone-deaf or bitter diatribe against “pointy haired bosses” or the necessity of office politics (which actually fascinates me as a subject). A lot of managers, executives, and people in general aren’t complain-bragging at all when they assess situations, offer excuses, or make apologies. But intentional or not, managers and corporate power brokers over the course of decades have created a culture in which complain-bragging about busy-ness, multi-tasking, and “firefighting” are as common and culturally expected as inane conversations about the weather around the water cooler. Rather than complaining about this reality, I’m encouraging myself and anyone reading to avoid getting caught up in it quite so automatically.

Why avoid it? Well, because I’d argue that obligatory complain-bragging creates a mild culture of failure. Let’s revisit the bullet points from the previous section and consider them under the harsh light of process optimization:

You see, the problem with corporate complain-bragging or complain-bragging in general is that it necessarily involves complaining, which means ceding control over a situation. After all, you don’t typically complain about situations for which you called all the shots and got the desired outcome. And sometimes these are situations that you ought to control or situations that you’d at least look better for controlling. So I’ll leave you with the following thought: next time you find yourself about to complain-brag according to the standard corporate script, make it a simple apology, a suggestion for improvement or, perhaps best of all, a silent vow to fix something. Do these, and other people might do your bragging for you.

How Stagnation is Justified: Language of the Expert Beginner | DaedTech

[…] in a position of company trust. They delegate, call the shots, set policy, and probably engage in status posturing where they play chicken with meeting lateness or sit with their feet on the table when talking to […]

That’s really insightful. I think you’re absolutely right about complaint-bragging. It applies especially to the corporate context, where actually *enjoying* your work environment, project, manager, or subordinates identifies you as a target to be taken down. Writ large, it creates a culture of negativity where every positive posture has to be counterbalanced with a dig against someone or something, no matter how unrelated. “It’d be a great project if that fucker Bob weren’t on it.” Pretty soon, everyone hates Bob, even though he was just an anti-scapegoat… someone targeted to counterbalance the success of the project! This also makes sense… Read more »

The idea of some kind of positive/negative ledger that stays balanced hadn’t really occurred to me, but now that you point it out, that really does seem to apply. People frequently extol the negatives and “heavy responsibilities” of their positions to defray ambitious (and jealous) up-and-comers. “Yeah, I may get to make all the decisions, but I have to deal with Bob (or whatever would seem unpleasnt).” In the context of your MacLeod Hierarchy series of posts, this makes me wonder if the corporate Sociopaths don’t cultivate, at least subconsciously, the complain-bragging culture. I mean, if anyone would buy a… Read more »

[…] (at which they fail) and, at some point, they make the leap into real management, about which they complain-brag (“I don’t get to write any code anymore; I’m always in meetings with […]