There’s a moment at a job that you’ve probably never thought about specifically, but it’s a knee point of sorts. Think of arriving at a new gig that you take somewhere, fresh out of the interview process, pumped about the new opportunity and the 10% pay bump you’ve negotiated for yourself, and generally rarin’ to go. You’ve come out of an interview process in which you’ve presented a pretty rosy picture of yourself and so have they, so everything’s awesome.

Then you arrive for your first day with your passport to prove citizenship and your lofty expectations and, after a period of getting settled, you get down to work and see what’s going on. Maybe it’s a walk through the code base or your first standup meeting where it happens. Maybe it’s a department meeting. I don’t know. But somewhere, it happens. You see something pretty crazy that calls into question all of the awesome things you thought about your new Shangri La. Maybe the company is using Visual Source Safe for source control. Maybe “daily standup” is a manager sitting while 30 direct reports spend 2 hours furnishing status updates. If you think hard, I’m sure you can remember the first “these people are insane” moment that you had at any given company. But that’s not the moment that I’m posting about; that’s just a baseline moment to which we’ll return shortly.

That first WTF moment probably isn’t the last and, to some degree, this is inevitable since not everyone will do things in quite the same way. You respond to these early moments by asking questions of the people there: “so, what’s the backstory behind that 12,000 line singleton class” or maybe “why do you guys put up with code commits taking 3 hours?” And, what’s more, you probably make the case to remedy some of these things and, perhaps even have some success. You fight strategic battles but you don’t (and can’t) win them all, and at some point you and the company adapt to each other like an ice cube in a warm glass of water becoming coolish water. You change some things and get used to others.

And then the moment in question comes. It sneaks up on you when a new hire comes on board, looks at the code commit process you’ve trimmed from 3 hours to 2 hours and says, “what’s wrong with you guys that commits take 2 hours?” The moment happens when you say, “that’s not me, man — you should have seen what these goofballs were doing before I got here. Don’t lump me in with them.” Tell me this has never happened to you, I dare you. You wince and say, “it was like that when I got here!”

As one of my favorite movie characters (I make the distinction because I have no idea if the actual man said things like this) Doc Holliday said in Tombstone, “apparently, my hypocrisy knows no bounds.” I mention this because I’m about to advise against this in a “do as I say and not as I’ve done” sense. Over the course of my career, I’ve tended to disengage (and eventually leave) from situations that I found to be degenerate, rather than battling endlessly to correct them. This led to a tendency to keep myself at arm’s length from a group if I didn’t like things that were happening. 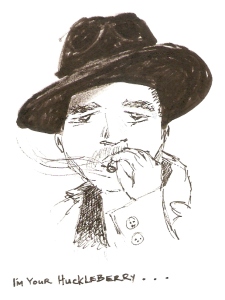 What I’ve come to understand is that there is no “me and them” except in the realm of your (and my) hollow excuses. As soon as you sign on with that company, there’s only “we.” I’ve learned the hard way that accepting this immediately results in better outcomes in the same way as the “fail fast” mantra. The best outcome is that you get there, ask questions about “why does our build take so long and how can we fix it,” and you start chipping away, making real progress that you can take pride in. Your investment of your own reputation in the endeavor provides strong motivation. Another decent outcome is that you can’t make progress and are forced more quickly to ask yourself, “do I want to be part of a ‘we’ that operates this way — do I want my name on this?” If the answer to that is “no” and there’s no sign of improvement, it’s better to exit stage left as soon as you can than to sit around, making sure everyone knows that you don’t actually think much of your group.

Really, that’s a terrible outcome for as long as it continues. You’re unhappy and you look like an excuse-offering malcontent. Your peers resent you because they perceive (probably correctly) that you’re bashing their previous work or throwing them under the bus. It’s a bad situation all the way around, and it can be avoided, I’ve learned over time, by getting to “we” as quickly as possible.

So when transitioning to a new job, assignment, team, or whatever, start talking immediately about what “we” do. It will align you with your group, generate earlier feedback for you on whether it’s a good fit or not, and probably bias you over the long haul to evaluating mutual compatibility more carefully up front.

Are you writing my biography or something?! Creepy!