A Study in Mistrust

I witnessed a rather surreal series of events some time ago. A software group lost its line manager to the proverbial greener pastures and was sort of temporarily adrift in a leadership vacuum. The organization didn’t immediately backfill the role and the team sort of lurched on for a little while, unsure of who would be transferred in. During the course of a search for a replacement, an interim manager was appointed, and the team promptly quit. Yes, you read that correctly. The team quit. I don’t mean they quit on him the way a sports team “quits on a coach” by tuning him out. I mean that the entire development team, within an incredibly short period of time, resigned from their positions. The world of software people is a strange one where they can often have new jobs within days or certainly weeks of deciding to look. But, I digress.

I’ve been watching the British take on Sherlock Holmes of late, and that has inspired me to spend a little bit of time thinking of a name for this case. After discarding such inanity as “The Case of the Missing Team” and such drollery as “The Adventure of the Vanishing Devs,” I settled on “A Study in Mistrust.” 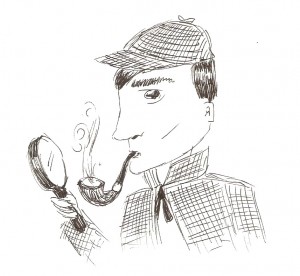 The game’s afoot! (But first some backstory)

To solve the case, and lacking the formidable powers of deduction that Sherlock Holmes brought to bear, I’m going to rely instead on history. Labor has a rather rich history of mistrust once societies grow beyond the level of “tribe” where things tend to operate democratically or communally. The reason for this is that the origin of the corporate labor model involves foremen whipping indentured servants, slaves, and laborers who were failing to construct pyramids and the like quickly enough. You probably wouldn’t trust people either if the proposition they offered you was, “do this or I’ll injure you.”

Of course, we’ve come a long way since antiquity (though not without regressions). Feudalism replaced “do this or I’ll injure you” with “do this or I’ll let others injure you” and “do this or you’ll starve.” It’s not exactly a meteoric rise up Maslow’s hierarchy, but one supposes that hunger and possibly realized threats are a little better than immediate threats. Serfdom eventually gave way to the Industrial Revolution, which by and large replaced “do this or I’ll injure you” with “do this or you’ll go hungry and possibly end up in debtor’s prison.” And so, another relatively unremarkable step was realized. But then labor laws came about, removing Gilded Age practices like sharecropping and tenant farming from the equation. Actual gains were made and social safety nets created, resulting in a situation where not laboring in employ wasn’t necessarily as bad as it had been, historically. The unemployed still don’t have a particularly great life, but walking away from a job no longer constitutes a visceral, immediate threat to your well-being.

If you go all the way back to the labor of antiquity that was not cooperative (e.g. hunter/gatherer societies) and consider what caused the original power imbalance, you’ll find a lot of things like hereditary station in life. Your dad was a laborer and whip-wielder’s dad was a foreman, so whip-wielder gets to whip you while you labor. This doesn’t exactly engender a lot of mutual trust in the first place, and the nature of the situation makes things worse. Stacking pyramid stones sucks, and no one would want to do that, so you have to whip people to make it happen (or invent some religious story like telling laborers it’s worth it because even though their lives suck, they’ll totally get a better seat on the ferry to the afterlife for their troubles). The whip-cracker doesn’t trust the workers to work and, not surprisingly, the workers don’t trust the dude that’s whipping them.

That (lack of) trust story didn’t change a whole lot as the workforce gradually shifted from slave-oriented to feudal to early capitalist societies (not that this was a linear journey, as evidenced by the African Slave Trade). By the late 1800’s there wasn’t any (much) whipping going on, but your boss, who was also your landlord, might evict you if you didn’t work to his satisfaction or might fire you if you didn’t pay rent. Boss doesn’t trust the peons, and the peons don’t trust boss. This brings to mind classic and iconic factory imagery of someone strolling around with the clipboard, making notes, and taking laborers to task for failing to sew buttons properly or assemble widgets quickly enough. The lazy workers don’t trust the overbearing foremen and vice-versa, and all parties are aware that the work sucks.

Interestingly (and absurdly), the factory/foreman model (along with a masochistic, heaping helping of Protestant Work Ethic) is largely what informs the operation of modern corporations. Think of some kind of garden variety, generic office satirized by works like The Office and Office Space, and what do you picture? I bet you quickly form images of employees finding ways to linger at the water cooler while mid-level managers say, “so, what’s happening…. yeah, so I’m going to need you to go ahead and limit your breaks to 10 minutes every 3 hours and punch in and out of the break room each time you enter so that I can check… yeah.” No doubt they monitor employee Facebook usage to ensure that the lazy louts aren’t misappropriating company time.

Over the years, the outfits have changed and the cruelty (at least in the corporate world) has been mitigated and moved away from physical, but the basic lack of trust between the two parties has withstood the test of time. “Do this stuff that sucks or I’ll do bad things to you.” We accept this as a pretty standard way to operate and shrug it off with inane banalities like “welp, they wouldn’t call it work if you liked doing it,” and “I work to live; I don’t live to work.” In a world of mutual mistrust, the employed and the employer have a sort of festering but peaceful cold war of equilibrium.

This approach tends to work well enough for jobs done by rote and other types of labor, but, not surprisingly, it sucks pretty hard when it comes to knowledge work (loosely defined as people who “think for a living”). That is, yelling at doctors to “doctor faster and with fewer mistakes” doesn’t seem to lead to better health outcomes. The main barrier to accomplishing knowledge work isn’t the same as the main barrier to stacking pyramid stones. It’s hard to get people to stack pyramid stones because it’s boring, back-breaking labor that’s simultaneously not worth much from a market perspective (it requires no skill) and not worth doing from an individual perspective (who needs the hernias and slipped discs) — the ideal solution is to automate. But with knowledge work, the main barrier to accomplishing things tends to be some kind of creative block, which is ideally addressed by stimulating environments conducive to creative thought.

There’s a new norm emerging, and it’s driving things like the Agile movement, startup, “perk” culture, casual/flexible office environments, remote work, etc. The new norm of which I’m speaking is the idea that you get the most productivity out of knowledge workers by making them comfortable, relaxed and happy. And the element at the core of all of this is trust. Gone is the “do this stuff or I’ll do bad things to you” contract and in its place we find a new employer-employee contract: “if you deliver value and get things done, we’ll make it worth your while and try not to bother you more than we have to.”

And so, Watson, only one piece remains missing after all of this background. Why would a team of knowledge workers in this brave, new paradigm just up and quit? (I’m resisting the urge to start this next sentence with “elementary.” You’re welcome). They’d quit if they were forced back into the old style of contract when they’d been used to the new; going from being trusted to being guilty of laziness until proven innocent would do the trick. And fast. And that’s exactly what happened.

I’ve written previously about how ridiculous it would seem to go from a well implemented agile process to waterfall. This is a similar concept. Going from a situation with the trust contract to a situation with the threat contract would be worse because it doesn’t just seem inefficient and weird — it would feel dehumanizing. And, in an industry where the demand for knowledge workers is through the roof, a knowledge worker in this position would quit and quit fast. And that is what the whole team did “A Study in Mistrust.” They reacted predictably to a whip-cracking newbie manager that wanted to “set the tone” from the start.

It’s worth considering your own situation and, if you have people reporting to you or you’re a non-org-chart thought leader, it’s especially worth considering the situations of those you lead. The ideal situation is one in which the employee and employer benefit mutually from an arrangement of trust, but if your situation is less than ideal, take care with how you handle it. Bravado and shows of force are not going to lead you to new outcomes. Both players in the relationship and signatories to the implied contract have a vested interest in finding a way to create or repair the trust.

I enjoyed your concise summary of labor. Models change and it’s difficult for some of those in power to embrace the shift. This post was apropos; I was chatting with a coworker yesterday who said this was called Theory X management (http://en.wikipedia.org/wiki/Theory_X_and_Theory_Y).

That was an interesting read — thanks for the link. Wasn’t familiar with Theory X/Y, but it sounds like I’m not the only one who has perceived this management style dichotomy and its underpinning philosophical view of people.

I encountered a presentation linked from Software Lead Weekly entitled “Reinventing Management” by Frederic Laloux. The length (1h 42m) made me question whether it was worth the investment, yet the comments were overwhelmingly positive. Here’s the link: https://www.youtube.com/watch?v=gcS04BI2sbk TL;DW version — he covers how companies/management have changed over the years because the prior system (wolf-pack, agrarian, industrial, knowledge economy) was no longer suitable. The thesis involves the study of 12 companies (in a variety of sectors) who employ (1) self-management (let the people closest to the fire decide how to act), (2) a sense of wholeness (valuing people first because… Read more »

I just finished up my latest Pluralsight course, so I’ll have time in the evenings between now and Christmas. I’ll have to give this a watch while I eat dinner one night.