A Developer’s Guide to Recruiters

More and more of my posts these days are in response to reader questions, but this one actually isn’t. However, I’ve been asked about specific aspects of this general theme frequently enough that I figured this was a good subject to cover. I’ve dealt with a lot of recruiters in my career, both as a candidate and a candidate seeker, and this has put me in a position to at least have an informed opinion about the subject. It’s something that’s at times overwhelming and often counter-intuitive, so hang with me, and let’s take a tour through the subject. Even if you’re a savvy job-hopping veteran, maybe I can at least offer you a different technologists’s perspective.

First Up, Check Yourself

Okay, so there are a lot of recruiters out there, and you’ve probably seen a less than stellar display from some of them. “5 Years of Experience with Swift.” “Mad XML coding skills.” “C-Pound a plus.” It’s common for developers to laugh together at these antics. There are even (hilarious) twitter accounts lampooning this. It can also be annoying to get repetitive emails from some organization about jobs that are not fits for you or to have a guy call you three times in a day, saying things like, “I couldn’t help but notice you hadn’t returned my first two calls.” I get that.

But here’s the thing. You’re incredibly, ridiculously fortunate to be in a position where so many people are saying, “hey, please come interview for this job for more pay” that you find it annoying. I’m not saying “you’re fortunate” in the sense that you lucked into it — I know this isn’t easy work — but that you’re fortunate the market is and remains so strong. It can be overwhelming at times, but imagine the alternative of being stuck in a dead end job and being thrilled when some company wants to schedule a phone interview after you’ve sent out 100 resumes through monster.com or something. You might not even know what monster.com is, and that’s because you don’t have to go looking for jobs like other people. That’s the reason that recruiters exist — because the only way to find software developers is to go prying them loose from other firms, and it’s not like CTOs are going to take it upon themselves to start cold-calling competitors’ developers to offer them interview opportunities (though some larger companies do have staff recruiters that do this).

Also to consider is that recruiters are humans, and often they are humans probably no more interested in cold calling you than you are in receiving cold calls from them. Their paycheck depends on calling up a bunch of people who are most likely to sigh angrily and tell them to lose their numbers. That’s not exactly the stuff dreams are made of, so you might extend them a touch of sympathy and understanding if they’ve built up a thick skin and don’t seem overly sensitive to your social signals. They’re out there trying to make a living by getting you job interviews.

The Nature of the Game

Recruiters are sales people. Their customers are companies that need software developers. Their product is mutually beneficial employment agreements, which really means that their product is you, developer. Recruiters sell you to companies. Kinda literally. Typically, their cut is 20% of your first year’s pay, give or take. So, if Devs’R’Us places you with Acme Inc for a starting salary of 100K, Acme Inc. writes Devs’R’Us a check for 20K, and the individual recruiter (typically) gets some kind of commission on this. (This obviously doesn’t apply to companies with internal recruiting staffs, except that I’d wager their recruiters are still incentivized with a commission structure.) If things blow up before an allotted time period (often 6 months) and you and the company part ways, recruiting firm has to cough back up their cut in the form of a refund. 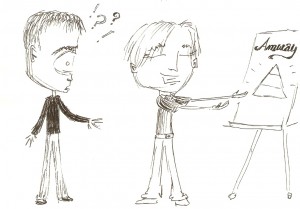 So Hot and then So Cold

This leads to sort of a weird arrangement. Typically, when you hear from a recruiter, you’re more than likely to ignore them or politely decline their invitations. But, if you don’t — if you show some interest — suddenly they’ll start blowing up your phone with interviews on which they want to send you. “Let’s pencil you in tomorrow morning for a phone call with Intertrode and how does your Thursday look for an in-person with Initech, and also my boss, the senior recruiter, would like to get on a call with you, and…” Wow. But then you say no thanks on Initech and Intertrode says no thanks on you, and suddenly you never hear from the recruiter again. Curious, you call and leave a message, and nothing. Maybe they get back to you halfheartedly.

Here’s the reason that this is happening. When you decide to stop ignoring the recruiters of the world, you suddenly become “fair game.” What the recruiter then does is evaluate every one of its clients that are seeking candidates and send you on a bunch of speed dates, trying to be the one to place you before anyone else snatches you up. But if none of those things works out, you’re yesterday’s news and not really worth revisiting until later when they’ve filled enough positions and taken on enough new openings that they can cross reference you against a bunch of new things.

Of course, not all recruiting firms are identical in their approach, but this is extremely common. I can’t tell you how many times I’ve heard from a recruiter that was extremely excited about a few gigs or even a single gig, and then radio silence for 3 or 6 months, only to have this repeated again and again. Recruiters’ clients are the companies, so they systematically go looking for people that would match that particular vacancy. Once they find you to match that one, they’ll economize by considering you for any others as well, but after that initial wave, it’s on to the next set of people.

If you can find a recruiter or a recruiting firm that is developer-focused — that is, one that gets your resume and talks to you, and then regularly checks in with you about potential positions — hang onto this one and partner with them on a long timeline. This is not common and it’s a nice resource for you.

They Say the Damndest Things

When you’re actively engaged in the interview process courtesy of a recruiter, the recruiter wants everything to go well. They want you to show up on time for the interview and make a good impression. They want the interview to go well and both sides to be impressed. They want things to sail along, resulting in offer, acceptance, and employment for at least six months. Cynically, that’s it, anyway. In reality, they probably want both sides pleased over the semi-long term so that companies keep giving them business (though they also depend on market fluidity, so they probably don’t want anyone sticking anywhere for too long). They want to pluck you from companies and put you in a new job as quickly as possible because higher churn rate means more money. Toward that end, they’ll say a lot of things, some of which are solid advice (such as their position on counter offers, described here), and some of which are nonsense.

Bear in mind their goal and the fact that they don’t mind a bit of reality distortion to achieve that goal, and it’ll be easier to understand why they say what they do and whether you should believe it. Here are some things that I’ve heard multiple times from different sources that you shouldn’t let fool you:

You may hear these exact things, variants thereof, or even arguments I haven’t encountered, but the important thing is always to keep in mind how they make their money and what their motivations are.  Their goals are mostly aligned with yours — you both want you to be placed in a new role that makes you happy.  But to you “makes you happy” is most important and to them “placed in a new role” is most important.

With your goal and their goal being pretty similar, it’s not terribly hard for your relationship with them to be a beneficial one.  Here are some tips that I’ll offer for getting the most out of working with recruiter:

Recruiters provide a service that matters to our industry where job hopping is common and demand is through the roof.  They grease the skids for us to be able to move fluidly between gigs.  The paradigm isn’t ideal, but it’s the best we have for now, so you might as well get used to the idea that you’re going to be playing this game and then, and enlist their help to play it well.

Recruiters are really just sales people, and the relationship between developers and sales people is generally a somewhat reluctant ones.  We’re makers that want to build things so well crafted that adoption is a no-brainer and requires no selling.  Sales people are relationship-oriented and deal mainly in people.  Within organizations, these groups often have natural friction, so the friction only increases when the software people are the product being sold.  But if you can get past the intense weirdness of this arrangement and work effectively with recruiters, it will only benefit your career.  Work with a lot, find firms that you like and work well with, and remember them for next time you’re on the market.  You won’t regret it.