If I had to guess at this blog’s readership demographic, I’d imagine that the majority of readers work mainly in the .NET space and within the Microsoft technology ecosystem in general. My background is a bit more eclectic, and, before starting with C# and WPF full time in 2010, I spent a lot of years working with C++ and Java in Linux. As such, working with a Raspberry Pi is sort of like coming home in a way, and I thought I’d offer up some Linux goodness for any of you who are mainly .NET but interested in the Pi.

One thing that you’ve probably noticed is that working with files on the Pi is a bit of a hassle. Perhaps you use FTP and something like Filezilla to send files back and forth, or maybe you’ve gotten comfortable enough with the git command line in Linux to do things that way. But wouldn’t it be handy if you could simply navigate to the Pi’s files the way you would a shared drive in the Windows world? Well, good news — that’s what Samba is for. It allows your Linux machines to “speak Windows” when it comes to file shares.

Here’s how to get it going on your Pi. This assumes that you’ve setup SSH already.

And that’s it. You can now edit files on your Pi to your heart’s content from within Windows as well as drag-and-drop files to/from your Pi, just as you would with any Windows network share. Happy Pi-ing!

Here are the general steps to get a REST service going on your Raspberry Pi, using Python. One thing that I’ve learned from blogging over the last several years is that extremely detailed, granular how-tos tend to be the most yawned-at posts. So this is just a quick overview of how you can accomplish the goal without going into a lot of detail. If you want that detail, you can drill into the links I’m providing or else feel free to ask questions in comments or via email/twitter.

That’s all there is to it.  Right now, at the time of writing, you would go to http://<your pi’s ip>:<port>/office/on to basically turn everything from A on.  A and office are both hard-coded, but that’s going to change in the next few days as I grow this service to support adding rooms and lights via PUT, and storing them as JSON documents on the server.  You’ll be able to add a light with PUT, supplying the room, light, and X10 code, and then you’ll subsequently be able to toggle it with http://pi:port/room/light/{on/off}

You can also just install Andrew’s driver and use it as-is.  It even has a web mode that supports query parameters.  The reason I didn’t do things that way is because (1) I wanted a REST service and (2) I wanted to be able to customize everything as I went while learning a new language.

Getting Started with Raspberry Pi

(If you’re here because you googled for a RPi tutorial, I’d suggest skipping to the next section)

I’ve recently throttled back on being all .NET all the time, mainly because I’m trying to spend more time working on my home automation. Toward that end, I recently picked up a Raspberry Pi. Since the organization’s home page neglects to include an elevator pitch as to what it actually is, I’ll summarize by saying that the Raspberry Pi (or RPi, for short) is a fully functional computer that’s about the size of a credit card and contains a good cross section of the device I/O that you might want, including audio, HDMI, USB, and ethernet. Oh, and they’re $35.

I’d imagine that most of you reading have either heard of this or, if you haven’t, you’re thinking of half a dozen uses now that you’ve read my description. But if you aren’t, here are a few uses you might find attractive: tiny media PC, small robot controller, car OBD troubleshooter device, Roomba brainwasher (I totally want to do this and use it to chase my cats around). One could also use it, as I plan to, for home automation.

My purpose here with my first RPi is going to be relatively simple — I’m going to offload the home automation controlling functionality of my home’s server onto it. The server I’m currently using is a repurposed dinosaur that I took with me to college (P2, 400 MHz processor, and tricked out to the max in slots with a whopping 3 128 MB sticks of RAM). It chugs along with an old Fedora installation, running a web server, SVN, a few databases, samba, and a few other goodies, as well as being hooked up to my big external drive where media is stored and eventually whisked into the cloud via Crash Plan. Add to this the fact that there’s a firecracker module plugged into its serial port to make the jump from my software to the electrical, and this is a pretty busy old machine that may not be long for this world. So I’d like gradually to parcel out its functionality to a handful of other machines to minimize my exposure to an extremely annoying failure, and the RPi is perfect, spec-wise and form-factor-wise, for the home automation web server.

So your Pi arrived in the mail, it has no installed OS, no instructions, and you’re not really sure what to do. No worries. I was like you, and I fumbled through it cobbling together a variety of guides and tutorials, and here, centralized in one place, is how I did it. This is the dead simple, option-free way to get something going with your RPi. All you’re going to get from this tutorial is an OS and web server on the device, but you’re not going to have to pick 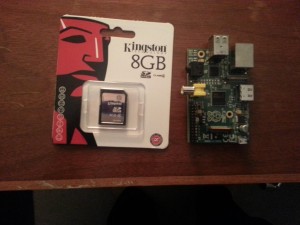 First off, prerequisites. To get started, here’s what you need:

You can probably make it happen without most of these things, but this is what I was working with when I did it, so if you have a Mac or want a different Linux distro on your RPi, this isn’t the tutorial for you.

Linux on the Pi

Here are the steps that I followed:

And, viola! The transformation from RPi in the box it shipped in to little web server is complete.