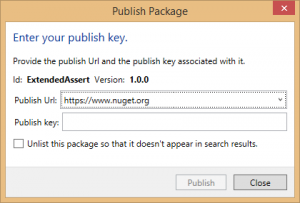 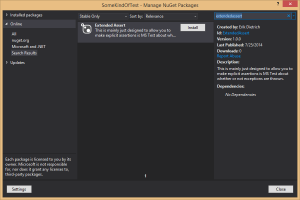 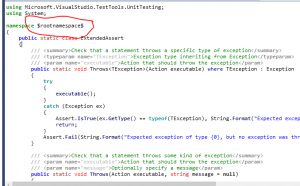 I was setting up to give a presentation the other day when it occurred to me that Nuget was the perfect tool for my needs. For a bit of background, I consider it of the utmost importance to tell a story while you present. Things I’m not fond of in presentations include lots of slides without any demonstration and snapshots of code bases in various stages of done. I prefer a presentation where you start with nothing (or with whatever your audience has) and you get to some endpoint, by hook or by crook. And Nuget is an excellent candidate for whichever of “hook” and “crook” means “cheating.” You can get to where you’re going by altering your solution on the fly as you go, but without all of the umming and hawing of “okay, now I’ll right click and add an assembly reference and, oh, darnit, what was that fully qualified path again, I think–oops, no not that.”

In general, I’ve decided to set up an internal Nuget feed for some easier ala carte development, so this all dovetails pretty nicely. It made me stop and think that, given how versatile and helpful a tool this is, I should probably document it for anyone just getting started. I’m going to take you through creating the simplest imaginable Nuget package but with the caveat that this adds a file to your solution (as opposed to other tutorials you’ll see that often involve marshaling massive amounts of assembly references or something). So, here are the steps (on Windows 7 with VS2012):

Observe that source (or text or whatever) files are installed to your solution as if they were MSI installs. You can install them, uninstall them, and update them all using a GUI. Source code is thus turned into a deliverable that you can consume without manual propagation of the file or some kind of project or library include of some “CommonUtils” assembly somewhere. This is a very elegant solution.

It shouldn’t take a ton of extrapolation to see how full of win this is in general, especially if you create a lot of new projects such as a consulting shop or some kind of generalized support department. Rather than a tribal-knowledge mess, you can create an internal Nuget feed and setup a sort of code bazaar where people publish things they think are useful; tag them with helpful descriptors; and document them, allowing coworkers to consume the packages. People are responsible for maintaining and helping with packages that they’ve written. Have two people do the same thing? No worries–let the free market sort it out in terms of which version is more popular. While that may initially seem like a waste, the group is leveraging competition to improve design (which I consider to be an intriguing subject, unlike the commonly embraced anti-pattern, “design by committee,” in which people leverage cooperation to worsen design).

But even absent any broader concerns, why not create a little Nuget feed for yourself, stored in your Dropbox or on your laptop or whatever? At the very least, it’s a handy way to make note of potentially useful things you’ve written, polish them a little, and save them for later. Then, when you need them, they’re a click away instead of a much more imposing “oh, gosh, what was that one thing I did that one time where I had a class kinda-sorta like this one…” away.